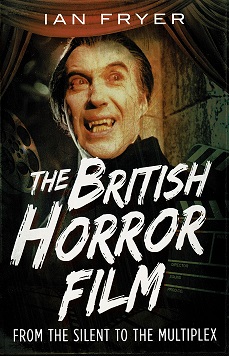 With an ambition to match Baron Frankenstein, Ian Fryer assembles a history of British Horror Film, from the silent to the multiplex. Rather than taking a strictly chronological approach, each chapter covers a theme such as Hammer Films or the films of Norman J Warren. The slightly episodic approach is reminiscent of the books that the BBC used to publish to accompany their epic documentary series. And what a series this would make.

As the terms "film industry" and "show business" remind us, the prime motive of horror movies is to make money. Any survey of the British Film industry will consist of a succession of product life cycles, both of companies and individual workers, and this fits the format of the book particularly well. The decline of Hammer Films is a sad story, but it covers several chapters. By comparison, the life cycle of their successors cover barely a chapter each, as the international market becomes more voracious, exsanguinating each film-maker's vitality.

Fryer rightly identifies the unsung godfathers of Hammer Films; Harold Wilson and the Treasury's Sir Wilfred Eady. While many film books make passing mention of the Eady Levy, Fryer explains the crippling post war trade deficit between Wardour Street and Hollywood, and the attempts by Wilson (then President of the Board of Trade) to load the dice in Britain's favour. It was the combination of tax on cinema tickets, and re-distribution to nominally British film-makers which attracted American co-producers to Hammer (as well as persuading the likes of Milton Subotsky and Albert Broccoli to establish a British presence).

However, the book also identifies the particular appeal of the British Horror Film. At its best, a combination of vivid imagination, striking iconography and, "the sublime;that quality of greatness which cannot be explained by rational means." It isn't just Hammer and Amicus, but also the "neo-Hitchcockian visual flourishes" of Pete Walker, the intelligent enthusiasm of Norman J Warren (Satan's Slave) and the underappreciated Harry Bromley Davenport. Fryer dedicates the book to Arthur Crabtree, director of "the remarkably scary and bloodthirsty" Fiend Without A Face, and its creatures consisting of an "ambulatory brain and spinal column".

There's always a pleasure in reliving your favourite films and Fryer covers them all from Revenge of Frankenstein to The Woman In White, from Queen of Spades to High Rise, but after reading Fryer's description of the 1936 Boris Karloff movie, The Man Who Changed His Mind, and Pete Walker's House of Mortal Sin, I feel intrigued enough to seek the movies out. That's what a book like this should be all about; another Forrest Ackerman tempting the readers with visions of things undreamt.