Four years before joining 'The Plane Makers', Alan Dobie starred in CAPTURED, a 64 minute film training film with the impact of a full scale movie. Written and directed by John Krish, who would later make UNEARTHLY STRANGER and THE MAN WHO HAD POWER OVER WOMEN, the film was commissioned by the British Army to teach servicemen how to resist brainwashing techniques experienced in Korea. Although Krish had hoped the film would serve as a show reel to help him break into feature films, CAPTURED was classified as restricted and was not to be seen outside military installations until 2004.

While Krish's misunderstanding may seem naive in retrospect, it's worth remembering that the concept of brainwashing was hardly a military secret. It had been the subject of several Hollywood movies such as THE RACK (1956) in which Paul Newman is put on trial for collaborating while a Prisoner Of War in Korea, and THE FEARMAKERS (1958). However, CAPTURED was intended as a training film, looking not back at the past but forward to the future. 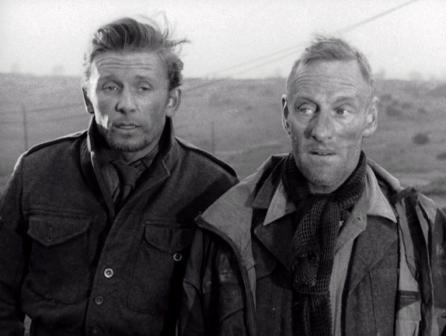 CAPTURED has an impressive cast. Bernard Fox, the Welsh actor who specialised in 'fake Englishmen' (Colonel Crittenden in Hogans Heroes, Dr Bombay in Bewitched, Captain Havlock in THE MUMMY ) has a low-key role as the officer briefing Dobie's intelligence corporal and a sergeant (played by Gerald Flood from 'The Rat Catchers') who is about to go out on a scouting mission. When Dobie is caught, he meets up with Wilfrid Bramble (pre 'Steptoe and Son') as a bolshy old soldier who spent several years in a German Prisoner of War camp. Dobie warns him that things could be different in Korea.

The film is introduced by Anthony Farrar-Hockley, then chief of staff at Sandhurst but previously a Captain during the Korean war who had been captured along with his regiment and subjected to brainwashing by Chinese and Russian advisors, with the aim of making them confess to being 'Imperial Aggressors'. The fact that Farrar-Hockley had resisted the treatment, reinforced the message of the film. In contrast to the more sadistic concentration camp movies, CAPTURED has a positive message. Although Dobie is the main recipient of the torture, he also emerges as a charismatic figure among the other prisoners, reinforcing the message that they must stick together in resisting their captors. 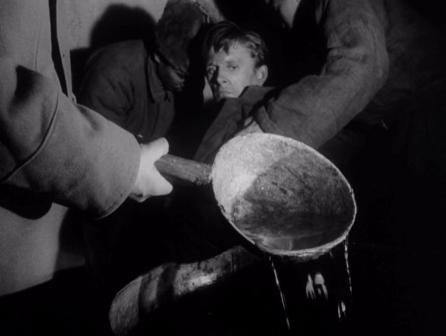 One of the techniques used by the Chinese and Russians is a 'divide and rule' tactic. Identifying prisoners' weak spots and encouraging them to turn against each other. Dobie counters the technique by appealing to basic discipline and exhorting the prisoners to stick together. Even though he has been betrayed, Dobie says that's something the betrayer will have to live with afterwards, but for now it's important that they present a common front. The fact that Dobie is a corporal, rather than an officer, emphasises the concept that his behaviour is something that should be deep-rooted in every soldier and not just something that has to be instilled by an officer.

As a training film, CAPTURED is never quite as harrowing as something like THE CAMP ON BLOOD ISLAND. Krish uses voiceover to convey how Dobie's character is resisting the harsh treatment (being forced to sit upright for days in an unlit cell) although towards the end, there is an unsettling moment when Dobie begins to hallucinate hearing his parent's voices. When it comes to the most unsettling scene, where Dobie is waterboarded, we don't hear his thoughts, and just see him struggling as water is poured over a cloth held over his face.

CAPTURED is available as part of the British Film Institute 'Flipside' range and comes together with some of John Krish's memorable public information films (such as 'Sewing Machine' from 1973, where we see the last minute of a little girl's life before she's run over by a car, while her mother tries to finish her sewing) and a recruitment film made in 1976 for the Prison Service.