Alan Dobie as Sergeant Cribb in.. 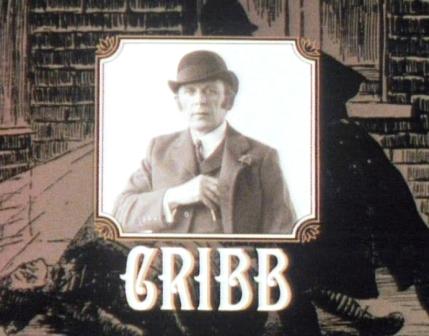 Although CRIBB would ultimately lead to Granada making THE ADVENTURES OF SHERLOCK HOLMES on film, the majority of CRIBB episodes were the standard mix of videotaped interiors and location filming. This budget restraint leads to an odd air of surrealism reminiscent of THE AVENGERS, when Cribb and Constable Thackeray (William Simons) visit a Home for Destitute Artistes.

The doors of the reception room are concealed by a mural depicting an audience, as seen from the stage. So the room, is in effect a stage, upon which the drama is played. Cribb and Thackeray hear music hall songs, but it's not clear if it's supposed to be a recording playing ( it's later confirmedd that the sound is supposed to be that of the artistes in the next room preparing for their return to the stage).

Out of the shadows appears the Housekeeper (Patsy Rowlands) who projects an air of warmth and welcome, although the air darkens when she opens the door to the next room to silence the performers .Another odd shot by director Julian Amyes, presumably born out of budget restrictions, is a close-up of Patsy Rowlands opening the door, sternly flicking her eyes from side to side as the off-camera voices die away. We never see the performers, and the sound never sounds like anything more than a recording, but the oddness of the shot instantly registers harsh and sinister undertones. 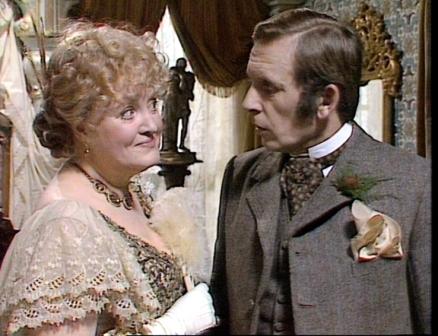 Patsy Rowlands makes the most of the sexy and predatory housekeeper, telling Cribb how he reminds her of her husband (who lost his glasses in Hyde Park and drowned in the lake) and loosening her hair as she tells him, 'You must see my box -so very intimate.' (the box, located in her boudoir has been rescued from a closed theatre).

Dobie, who often played more austere characters, displays a lively charisma as Cribb, taking command in declamatory style. 'When I see a corpse and there are no bullet holes I immediately suspect poison!' A cynical working class thief-taker, Cribb is constantly under pressure to improve his arrest rate by his dim superior Jowett (David Waller). Only Constable Thackeray is more put-upon than Cribb, expected to stand all night outside a lodging house to watch for the occupant leaving. This leads to a picturesque and amusing scene in the early morning sunlight where Thackeray discretely watches an undertaker's cart arrive and two street urchins stroll up and stand beside him, watching the house and ignoring his orders to go away.