Businessman Royston Land-Price (Patrick Wymark) has bought Swent Abbey from his fellow-company director Lord Swent. When Swent dies, his family led by Clarissa Hedge-Hacking (Fanny Rowe) come into conflict with the Land-Price's over the funeral arrangements. They continue to argue as a Martian fifth column begins to infiltrate the planet. 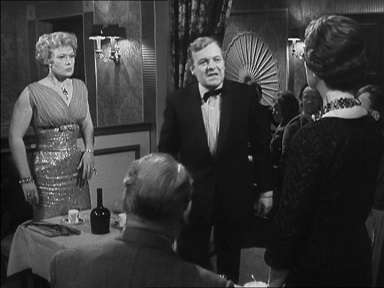 Specially commissioned from novelist Angus Wilson, the satirical comedy continues the theme from his novels of the gentry trying to preserve their way of life against the changes to British society brought about by the new rich.

Broadcast before Patrick Wymark joined the cast of The Plane Makers, the ABC production shows him playing a property tycoon in a much broader style. While Land-Price is determined to succeed, he is a different type of character from John Wilder. Land-Price is drawn into the argument by vanity, but also to satisfy the social ambition of his wife (Eleanor Summerfield). John Wilder seems interested only in the acquisition of power, and uses his wife's social position to make useful connections. Wilder also seems better at bluffing than Land-Price ( An interesting compare-and-contrast exercise would be to view Miss Geraldine , the episode of The Plane Makers in which Wilder tries to buy up a property next to his airfield).

Wymark's main opponent is Fanny Rowe* as the unstoppable Clarissa Hedge-Hacking. Clarissa has a relentless tunnel-vision to match any P.G.Wodehouse Aunt and dominates the play. It is Clarissa, rather than her husband (Clive Morton) who handles the attempt by Land-Price to negotiate. In view of the recent debate over sexual harassment and inappropriate touching, it is instructive to see the brisk way she rebuffs Land-Price's attempt to make a pass at her. 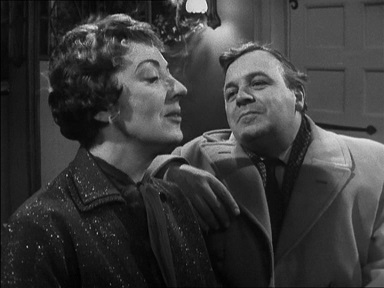 The production is fast-moving and the humour has generally worn well. With Summerfield, Morton and Athene Saylor taking part, the play has overtones of a Launder-Gilliat comedy. It's perhaps a pity that the final comic set piece is slightly abbreviated, but studio-bound Jarrott and designer Jim Goddard do well to pull off a comic climax that should really have been filmed on location. Among the supporting cast there's a nice cameo from Bill Shine (Inventor Black in Supergran) as an RAF-type running a pub-restaurant and non-commitally manoeuvring round the prejudices of both the Hedge-Hackings and the Land-Price's.

It's instructive that the final line of the play is delivered over the television. Reviewing the play, The Times observed that Wilson, "contrived that not only the characters in his play, but also we the audience, should be caught napping at the time the Martians secretly carried out their blitzkrieg on the Earth". And of course, most of the audience would have been disinterested observers of the conflict between the Gentry and the New Rich. For us, the Martian invasion signifies just another unelected elite.

Born in Bexhill in 1913, Wilson began writing following a nervous breakdown while working as a codebreaker at Bletchley Park during World War Two. He later wrote "Anglo Saxon Attitudes" and "The Old Men At The Zoo", both of which were adapted for television.

The sub-plot of a Martian invasion seems to have been inspired by a column he wrote for The New Statesman . Wilson was spending Coronation Day in a small Essex village. During the firework display Wilson spotted "a line of dwarfs drawn up black and threatening on the edge of the common against the skyline. Who could they be? Martians, no doubt. What better time and place for an interplanetary invasion? But no, I was informed this was a nearby private school come to observe the pyrotechnics, drawn up at a safe distance from the town's possible infection. It cannot be said that the townspeople objected. They were used no doubt to the private school headmaster’s mediaeval belief that they were infected with bubonic."

(*Billed here as Frances Rowe, the former Eliza Doolittle of the stage appears to have reinvented herself as Fanny Rowe for sitcom work, as Wendy Craig's mother in the BBC's Not In Front of the Children, and later in Fresh Fields).