The Man Who felt Branson's Collar...

The Investigator by Michael Knox.

"The Man Who Felt Branson's Collar" would have been an apt title for the autobiography of Michael Knox, the Customs investigator who arrested Richard Branson in 1971 for purchase tax fraud. But Knox's experiences are far wider than this isolated incident, dealing with fuel fraud, preventing the import of drugs and pornography and eventually helping to negotiate the single market structure which, he ruefully observes, is about to be undone by the Brexit vote. 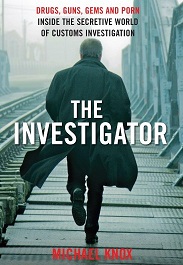 Michael Knox was an officer in the Investigations Branch of HM Customs and Excise, the organisation which merged with the Inland Revenue in 2005 to create the current HM Revenue & Customs.Just saying that clues you in to the historic scope of this book. Knox joined the Investigation Branch in 1968. He was inspired to apply to the Branch by The Revenue Men, a 1967 BBC2 TV series starring Ewen Solon as Caesar Smith, an Investigation Branch officer based in Scotland. Knox retired in 1996 shortly after the premiere of The Knock, ITV's series about a Collection Investigation Unit in London. If you can't remember The Knock, you'll realise just how long ago this book is set. But it is an important book. Ground level customs investigation work has been detailed in Jon Frost's cheery Anything To Declare? (2015) and Harry Ferguson'sLima 3 (2005) which related the stresses of tackling organised drug gangs. But the scope of Knox's career was much wider, being involved with the Arms to Iraq case and providing much of the detail in the system that was to form Britain's contribution to the Single Market.

The Branson case has been well documented ( here for instance ) although Knox implies that inaccuracies crept into previous accounts. Purchase Tax was the predecessor of VAT, introduced by the British Government in 1940 and putting a 33 and a third percent charge on luxury goods such as records. When Richard Branson was getting Virgin Records off the ground he realised that he could evade Purchase Tax by claiming to have exported the records to France and then turning back once he'd got his export documents stamped at Dover. After a tip from a disgruntled competitor, Knox realised that the discount Virgin was selling records for would have eroded any profit margin if they were actually paying tax.

Knox acknowledges the tensions between the IB and the Purchase Tax control officers who viewed the IB as "glory boys..leaving the mess to be sorted out after they'd trampled all over some poor officer's...relationships with traders that had been carefully nurtured over years." He amusingly recalls the careful negotiations he had to make with his own colleagues to gain an audience with the young Branson. Once he had gained access to Virgin's paperwork, Knox became sure there was fraud, and set up an elaborate sting to prove that the records covered by the export documents had been diverted for sale in mainland Britain. Knox writes engagingly about the progress of the case and clearly has some admiration for Branson (on the drive down to Dover Police Station for the formal charge, Knox decided they should stop off at a pub, "no handcuffs..just a quiet drink and a friendly chat"). He notes that Branson's night in the cells made him resolve never again to succumb to a temptation that might result in losing his liberty.

The scope of The Investigator reminds me in a way of James Stewart in The FBI Story, with each chapter covering a different stage in the progression of his career. Before joining the IB, Knox was appointed to one of the first Road Fuel Testing Units, searching for truck drivers running illegally on duty-relieved Red Diesel. After a fruitless month taking random samples of fuel, Knox decided to improvise and began asking the police constable in each area they visited to name the local dodgy characters. Armed with this intelligence, Knox soon increased his rate of detection. Following this success, he was admitted to the Investigation Branch where he began hunting for haute couture dresses being smuggled in from Paris to avoid both import duty and purchase tax, new jewellery passed off as second-hand (again to avoid tax) and cannabis smugglers. 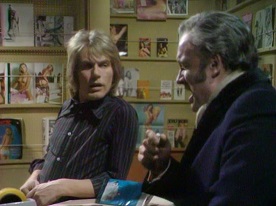 At times it's necessary to remind yourself of historical conditions. Knox recalls the exchange controls which had been in force since 1930's, limiting the amount of cash that could be taken abroad to Twenty Five Pounds (and later Fifty Pounds) . In the 1957 movie The Birthday Present, when toy salesman Tony Britton is caught trying to smuggle an expensive watch into London Airport, one of the questions the customs officers are interested to ask is how Britton found the money to buy the watch. As Knox comments, "most of us couldn't afford what was regarded as a meagre allowance." Similarly, Knox has to remind us of the distinction between 'soft pornography' sold in Soho bookshops ("plenty of nipples but not a public hair insight") and the harder porn imports. Whereas police officers had to prove that pornography was liable to "deprave or corrupt" Customs officers only had to prove that an item was "obscene" (and in 1971 pubic hair was obscene).Still a subjective opinion, but easier to prove in court. One of the raids on a Soho bookshop related in the book verges on the farcical and calls to mind Adam Faith and Iain Cuthbertson in the TV series Budgie

In the 1980's, Knox moved from investigation to negotiation. He joined International Customs at HQ, working to build the European Community Customs Code. This brought together all the regulations to control borders in a single document. The aim was to ensure that importers and exporters in each EU member state were subject to the same rules. In practice, agreement with all the member states was difficult. On a number of occassions, "we had to drop the imperative word 'will' and agree instead to 'member states may.. to allow a degree of choice as to whether a particular article had to be applied or not." Knox admits that he was often stubborn in these negotiations because the UK "was always punctilious in applying the legislation..whereas a number of other member states...only applied them in the breach, effectively only paying lip service to the requirements." In this sentence Knox gives a clue to why the British have always had problems with working in Europe. We treat the regulations as if it was sheet music to be followed in a stately march, where other member states prefer to take a jazz approach, with the regulations being a tune around which they will improvise. Nevertheless, Knox persevered and, until the Community Customs Code was replaced by the Union Customs Code in 2016, his work provided the bedrock for intra-community movements.

Then in 1987, Margaret Thatcher astounded everyone by signing up to the Single European Act which paved the way to freedom of movement and the end of internal borders. Knox was given "three weeks to come up with a comprehensive plan to prepare for the removal of frontiers by 1 January 1993." His high-level strategy for the next six years was accepted by the many interested parties (not just tax, but security, patents, food controls) and he was then tasked with definnng the fine-detail. This entailed a trip around Europe observing the baroque procedures and delays involvled in controlling and verifying movements. Some of his observations are fascinating, underlining the effort and imagination which was required to ensure freedom of movement across borders. It would no doubt make informative reading for the Brexiteers who will be charged with finding a "technological" solution to the task of re-building those borders.

Just over the Brenner Pass on the Austro-Italian border, he came across hundreds of trucks parked around a newly built administration building. "If you can't change the rules, change the infrastructure...(the Italians)...were marvellous engineers but hopeless administators." To lodge their declarations, driver had to hand in the main customs document at one window, then walk down to another window to hand in supporting documents, and a third window to hand in health certificates etc. "if he was lucky his clearance papers would be ready in three hours."

Europe found a precursor to the Single Market in the Schengen Convention, which kept traffic flowing on the cross-border motorways by allowing residents of the EU states to cross borders without checks. In the run-up to the Single Market, Knox (along with Doug Tweddle, who was in charge of the CHIEF Customs computer system) proposed a simplification of UK Customs import checks. "it allowed importers to submit their entries or declarations ahead of their arrival in the country...(they) could then be cleared as soon as they landed...this would reduce waiting times by hours."

However, it became clear that politically, the UK would not give up, "our island advantage for certain prohibitions and restrictions without a fight." Over the months, Knox worked with the Treasury and HMCE to put forward a proposal in which the UK could still collect VAT and Excise duties without border checks.Finally, a meeting was arranged with Chancellor Norman Lamont. "He opened the meeting, looking down at my paper which had been placed before his arrival on the table in front of him and exclaimed, "Is this the paper I haven't read? Luckily, most of the proposals for free movement were eventually agreed by the EU.

From the perspective of 2016, just after the Bexit vote, Knox suggests it will mean "a weaker trade deal...and the return of border tariffs with the necessary submission of Customs declarations and frontier delays. If this were to happens, I only hope they remember the success of my Fast Lane in the three years leading up to 1993. I really should have patented it.

As noted at the start, this is a work of history. After HM Customs and Excise merged with the Inland Revenue to form HM Revenue and Customs, much of the "protection of society work" was hived off to the newly created Serious Organised Crime Agency and UK Border Force. The book will tell you little about current anti-smuggling procedures, but does provide a valuable insight into the way society worked in the last half of the 20th Century. It is a competent and entertaining read.