"In big business, if you stick your head out too far, thereÆs always someone taking aim at it ¢ with an axe! ō John Wilder. 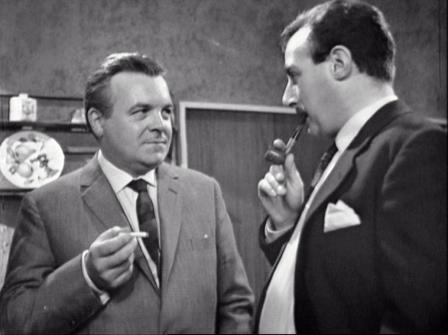 This is a significant episode, for three reasons. It is the first script about John Wilder by Peter Draper who would make a significant contribution to both this series and The Power Game. The episode also introduces Jack Watling as sales manager Don Henderson. But the most significant aspect of this episode is that it opens up a controversial aspect of WilderÆs life.

It would be interesting to know if this was originally intended to be Jack WatlingÆs first appearance in the show, or if Henderson had been intended to appear from the start and been delayed in some way. This doesn't feel like an introductory episode for Henderson. He only has a couple of scenes, but is treated as an established member of the team. In fact, the initial mystery is why John Wilder decides to take Arthur Sugden on a sales trip to Italy, rather than his sales manager. Sugden himself is dubious about his role on the trip. Although heÆs drawn by Wilder into the technical aspects of the sales pitch, Sugden later tells Wilder that, ōAn apprentice could have handled the question.ö

The bombshell, certainly for 1963, is that Wilder takes his mistress on the sales trip. WilderÆs secretary Kay Lingard (Norma Ronald) has arranged three air tickets for the trip, and Sugden assumes Lingard will be coming until Wilder brazenly arrives at the airport with Kate Barber(Ingrid Hafner ) telling Sugden that ōMiss Barber will be acting as my Secretary.ö

Hafner, who played Ian HendryÆs receptionist Carol in the first series of ōThe Avengersö, portrays Kate Barber as similar in many ways to Pamela Wilder. Earlier in the episode, Wilder has arranged events so that Pamela canÆt accompany him on the trip. Pamela (Barbara Murray) makes it plain she can sense his guilt and says, ōYou only have to tell me. You donÆt have to go through this elaborate pantomime so I wonÆt go with you.ö

Kate is equally resigned, telling Sugden that she had a daughter to support after her husband left her for a 17 year old girl. ōI can do shorthand, but not very well. Parents should bring up children to assume no-one will take care of them. Mine didnÆt.ö She describes the relationship with Wilder as being, ōVery like marriage. Marriage becomes a series of habits. So does this, except the habits are further apart. Once a year we go to the South of France. Theatre four or five times a year. Nightclubs ¢ never anywhere too fashionableģI suppose some wives donÆt get that.ö

Wilder himself has a sense that things are cooling off. ōWhen a woman has had a long, continuous relationship with a man, his more romantic image is bound to diminish. Just as no man is a hero to his valet ¢ or his mistress.ö

Patrick Wymark later told the Catholic Herald (2nd December 1966)that, ōMy dear old mother, who is 83, rang me up and said she didn't like the idea that Wilder had a mistress. She didn't like it because she is a very staunch Catholic and this was for her a matter of morals. So I asked her if she would mind watching me play Macbeth, killing kings, murdering children? ō 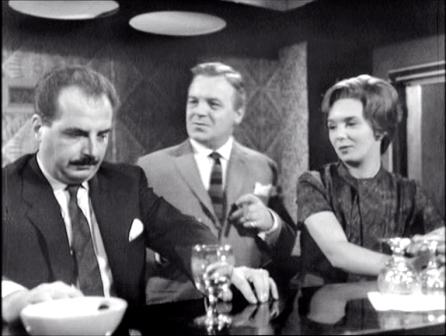 The episode sets the standard for Draper's later scripts with entertaining interplay between the three characters. In an early scene, Wilder joins Kate and Sugden at the hotel bar. ōIÆve been telling Mr Sugden that if heÆs in Milan long enough he ought to try and see the paintings in the Museo Poldi Pezzoli.ö

Draper's script gives the basis for three strong performances: Ingrid Hafner as the charming, dignified and pragmatic Kate Barber, Wymark showing a more vulnerable side of Wilder and Reginald Marsh portraying the competent but bewildered Sugden.

The root of the story is the mystery as to why Wilder has taken Sugden on the sales trip. The answer may have seemed a bit of a head-scratcher at the time since Wilder and Sugden debate some financial detail which is hard to take in. The paternalistic owner of the Italian company is dying, and that makes the company too risky as a customer. Wilder puts it in poetic terms, ōYou and I have been officiating at the death of an Empire. We came out specifically not to sell an aeroplane. ItÆs very difficult to stop a salesman selling, so itÆs best not to put it in their hands.ö

In the end, the scrupulous Sugden finds himself compromising, both on moral and business grounds. Wilder comforts him with the words, ōEverybodyÆs soul is just a bit smaller than the mortgage on his house.ö