By the time the second postponed episode of The Power Game was broadcast, rehearsals were reported to be underway for the second series. So although all his enemies are ranged against him, it should come as no surprise that Sir John Wilder triumphed.

Sefton Kemp (Ian Holm) and Bob Gillingham (Ralph Michael) prepare a report calling for an expansion of the National Export Board but acknowledging the over-representation of civil engineering and Bligh’s on the Board. Kemp leaks the report to a backbench MP, primed to stir up trouble.

Gillingham plans to control developments while being conveniently out of contact. He invites Caswell Bligh to a fishing weekend along with fellow builder Westland (who will publicly support Bligh on behalf of the industry in exchange for a knighthood) , journalist Sandy Warren (Basil Henson) and Sir Gordon Revidge (Norman Tyrrell). Susan Weldon is also invited to the weekend to keep her away from Wilder, although she has already told Wilder that she wants him to be thrown off the NEB so that their relationship can be more straightforward.

The Friday evening news reports that a group of backbench MP’s have tabled a motion protesting the over representation of one firm on the National Export Board. “One of the NEB members concerned was named as Sir John Wilder.”

On the Sunday evening, Gillingham tells the fishing party that the Minister has told him to request Sir John Wilder’s resignation from the NEB. Sir Gordon Revidge is asked to represent the banking sector at the expanded NEB.

On Monday morning, Sefton Kemp arrives at Wilder’s office with a letter of resignation for Wilder to sign. Wilder tells him, “Your one of the grey men, merging in the bureaucratic wallpaper. You make bullets for people with more guts to fire.”

Wilder flies to Stockholm where the Minister (Llewellyn Rees) is at a trade conference. He tells the Minister that he has circumstantial evidence that the Government has conspired to ‘crucify’ Wilder, who has no political affiliations, to protect Bligh who has been a Labour Party member for 35 years and was almost selected as a candidate. When the Minister says Wilder can’t prove it he says, “I don’t have to – it’s enough to mention it,” and adds that he gave the Shadow Minister the same dossier before catching the plane.

Back at the NEB offices, Gillingham receives a phone call from the Minister who tells him that a formula has been agreed with the Conservatives. “John Wilder is to be seconded from the National Export Board for Six Months. It’s to be made clear that he’s released temporarily for more valuable services.”

“He’s to be offered the post of Britain’s special plenipotentiary in Brussels. Made to order, Kemp. One of the ripest plums on the tree. Ambassador status. Ł15,000 a year. Access to the best contact network in the world. You’ve hashed this one up beautifully.”

In his office, Wilder shares a glass of champagne with Kay Lingard. She tells him she’s researched the line from the national anthem he wanted, “Confound their politics, frustrate their knavish tricks.”

It’s fitting that Norma Ronald as Kay Lingard gets to share the final scene with Wilder. With the vultures circling, it’s Lingard who carries out the pre-digital research (reading through Who’s Who) to prove a conspiracy against Wilder and comes into the office early on Monday morning to organise the phone lines (before the switchboard girl has arrived) and even brings a flask of her “most excellent coffee.”

Jack Watling, as Don Henderson, has lost the doubts of the previous episode and offers his resignation to Wilder because, “If I stay they’ll use me to chop you!”

Rosemary Leach is heartbreakingly effective as Susan Weldon in this episode. Edmund Ward cunningly puts her in a position where she is unwilling to help Wilder because she wants to know if he will still love her when he has no place on the National Export Board, but is forced to witness the conspiracy against him. The most sadistic scene comes when she is sitting in the car with Bligh and Revidge on Monday morning and Bligh tells Revidge that once Wilder is off the NEB, “Kenneth has lots of jobs for him.”

Peter Barkworth, as Ken Bligh, goes through a roller coaster in this episode – cautious and cynical when journalist Sandy Warren (Basil Henson) is sounding him out about Wilder’s future, clumsily insinuating when he tries to win Don Henderson over, and frighteningly callous when the news of the back-bench motion erupts, telling Wilder to forget about his plans for European projects. Patrick Wilder is silently rattled after his exchange with Kenneth and we realise how tenuous his future is. 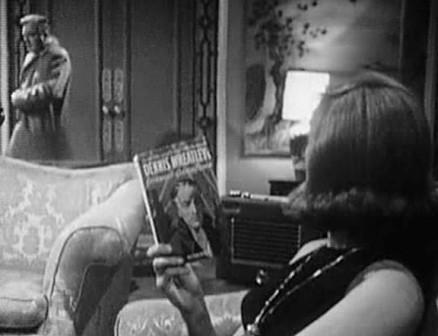 Barbara Murray is seen reading a Dennis Wheatley paperback in this episode, although it doesn’t seem to have the same significance as the copy of The Penkovsky Papers seen in an earlier episode.

Jayne Sofiano makes her only appearance as Pat Henderson (previously played by Anthea Wyndham in The Plane Makers). At least this confirms that Don is still married. Jayne would later play Dr Ginny Vickers in the 1969 series of The Troubleshooters. Ironically her final screen appearance would be as Richard Greene’s secretary in the sequence of “Tales From The Crypt” starring Barbara Murray. 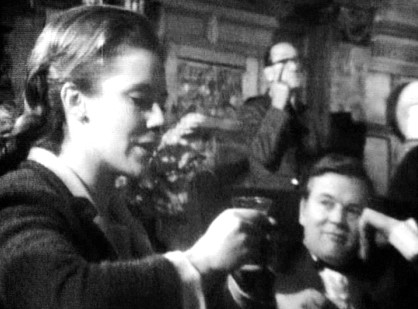