“John, if you don’t get out of my hair, I may well break your back.” Garfield Kane.

Garfield Kane (Barrie Ingham), Minister for Special Situations and Trade meets delegates from communist China and invites backbench MP Candleford (James Cossins) to ask questions in the House about whether optical goods should remain on the “strategic list” of articles that can’t be traded with communist regimes. Special Envoy, Sir Wilder wants to know what Kane is up to and suggests Dowling (Michael Jayston) uses his MI6 contacts to follow Kane on a trip to Paris. They discover that he met a French Maoist and the owner of a Chinese binocular factory at a safe house run by French counter intelligence. .

Kane warns Wilder to stay out of his business and demands Dowling’s “neutrality”. When Fowler informs Dowling that he’s been promoted to the Embassy in Jakarta, Dowling is unsure whether Kane or Wilder is trying to move him out of the way. Dowling has an offer from Ken Bligh, of a directorship but it will mean leaving the Foreign Office and spending two years in Canada. He asks Pamela Wilder (Barbara Murray) to join him. 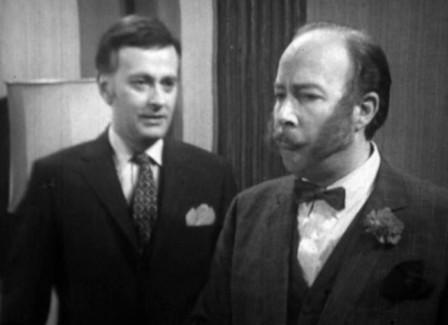 As this episode opens, the rivalry between Wilder and Kane has developed to the point where permanent under secretary Fowler tells Wilder, “There are people who are beginning to despair that this department is being run like a race between you and Kane to put one over on each other.” The ever competitive Wilder typically replies, “I hope you’re keeping score.”

Wilder convinces Dowling that they have a common cause in undermining Kane and they use Dowling’s security contacts to have Kane followed to Paris by an investigator. Later on, Dowling has to justify that use of resources to MI6 officer Leehouse (John Ringham) . Suspecting that Kane has tried to have him moved, Dowling explicitly suggests that Kane is conspiring with communist agents. The episode subtly suggests therefore that power can be misused – not for any grand malign purpose but for a combination of small bad decisions that end up having an unintended effect.

Dowling’s horse-trading with the investigator (Barry Wilsher) over how they will explain his trip to Paris and which official-form needs to be filled in, shows that Dowling has become well-established with what Kane calls, “his gang of witch hunters.”

This week’s plot centres on the “strategic list” which prevents trade with communist nations in goods that may be of military use. The list has featured in previous episodes - Caswell Bligh was undermining it in “Trade Secret” and it scuppers Wilder’s plans in “Standard Practice”. American envoy Edmans (David Healey) defends the list, saying America could not send men into action in Vietnam while undermining them in trade. But Garfield Kane says, “You could draw up a strategic list that prohibits the export of chewing gum.” Kane reveals that he was “asked or told” at the highest levels to get the “strategic list” amended. Britain is trying to be both a commercial and political power – but if you don’t have commercial power you lose political power.

As we have seen, Britain in 1969 was under intense economic pressure. The American commitment to sustain Europe’s exchange range mechanism was in doubt. Two attempts to join the Common Market had been vetoed by France. Kane’s meeting Chinese with the knowledge of French security services indicates an attempt – not just to open up trade – but also win favour with a belligerent European neighbour.

However, Wilder tells Kane that, “this absurd scheme had no chance of ever getting off the ground ( because the Americans are) not only a military power. They’re a commercial power.” In Wilder’s view America is protecting its commercial interests and must be dealt with like any other competitor. In the end, both Kane and Wilder agree with America that optical equipment will stay on the “strategic list” in return for opening up other items.

The most shocking scene in this episode comes when Dowling tries to enlist Jason Fowler’s aid in stopping Wilder and Kane from “tearing the Department apart.” Dowling locates Fowler in a strip club (“ a minor lunchtime sin”). The Deputy Under Secretary is surprised to see Dowling (“I didn’t know you were a drinker of darkness, Lincoln.”) He’s then unsettled when he realises that people know he frequents the club. Fowler is momentarily aggravated when Dowling tries to talk about Wilder and Kane’s squabbles and then reveals to Dowling that he is “incurably not well, “ with a condition that is, “irreversible – rather like politics.” 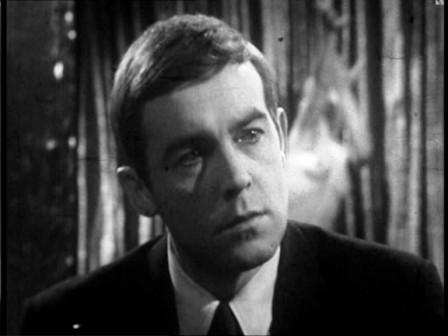 Fowler tells Lincoln that while the condition is not immediate, he’s been advised to “put his house in order” and summarises his house as, “Eight leather-bound first editions of the Waverley Novels, 100 minor editions, and the good lady Mrs Hatley, who prepares my food, my bed and cleans my bath every morning. “ He says that when he gets home, “It always seems to be dark. I have to switch on all the lights. It’s as if she’s saving up all the electricity somewhere in a box for some great, bright day when all the lights of the world go on.”

Fowler’s final scene in the episode shows him returning home after Dowling has refused his invitation to dinner – stood in the vast, quiet hallway of a Georgian townhouse, Fowler calls out to his housekeeper. Getting no answer, he switches on the lights and slowly climbs the stairs. 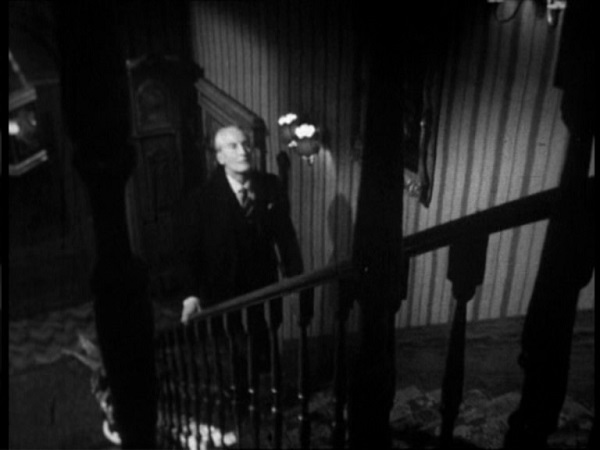 This terminal revelation further broadens what was a fairly one dimensional character in the earlier episodes. Peter Draper showed Fowler being protective of Dowling in “The Goose Chase”. In this episode Fowler provides an instructive example to Dowling (who tells Pamela he doesn’t want to stay in the Civil Service and end up like the older man) . Perhaps in order to have an effect on the future Fowler still tries to do his best for the younger man’s career. He tells Dowling he’s given him an “excellent” rating in his annual performance report and that he can expect a promotion based on merit, rather than because someone wants him out of the way. 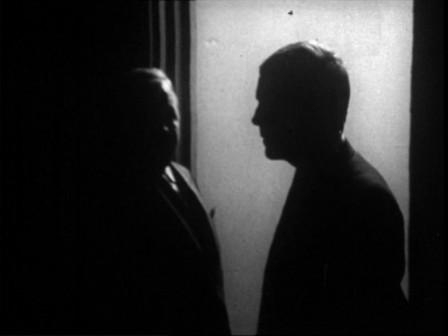 Dowling (Michael Jayston) and Wilder (Patrick Wymark) wonder if the French have been spying on them.

The relationship between Dowling and Pamela comes to a turning point in this episode. Dowling tells Pamela that he’s “sick of sneaking out to meet you in obreptitious corners” and reveals that Kenneth Bligh has offered him a directorship in one of his companies. When he tells Pamela that it will mean spending two years in Canada she agrees that, “We are coming rapidly to a decision.” Further pressure is added by the threat of a posting to Jakarta – not only will this take Dowling away from Pamela, it will also remove him from the centre of power and fasten him more firmly within the Foreign Service career path. With this sudden deadline, Pamela agrees to change her whole life, leave Wilder and join Dowling in Canada. When the threat of the posting is removed, however, Dowling is less inclined to jump into the private sector. Pamela is disillusioned to find that Dowling is as self-centred as her husband.

For Pamela this episode also represents a turning point. In “Cat Is You, Bird Is Me” she had told Dowling that she would never have gone away with Frank Hagadan. This is borne out by the second series episodes where she walks out on her marriage but lives alone. Now, as she tells Dowling, she is prepared to change her life completely for him. It’s perhaps notable that Pamela defended Hagadan to Don Henderson by saying he was less ruthless that Wilder. Also that Wilder told Susan Weldon that Pamela wanted him to be the same as he was at 35. Perhaps the attraction of Dowling, the reason why she is now prepared to go away with him, is because underneath it all she sees a younger version of Wilder (one who she can keep from becoming obsessed with his career and pursuit of power). Trying to win Dowling’s support against Kane, Wilder tells him, “Every time he gets something over on me, he gets something over on you.” While Wilder’s meaning is clear, it also reflects the view that Dowling is becoming Wilder.

The song which the disappointed Pamela listens to in her car journey with Wilder during the final scene is Scarborough Fair by English folk singer Deena Webster. The cover-version of the tradition folk song about impossible demands of a love (popularised by Simon and Garfunkle ) was arranged by Barbara Moore and released on Parlaphone on 18 October 1968.

In “Drinks on Sunday”, Dowling was shown to be known to the CIA as an associate of MI6, and attempted to call on Professor Mobbs (from Cecil King, former publisher of the Daily Mirror, who less than a year before had tried to instigate a coup against the Wilson government and install a “national government” made of politicians and business leaders. 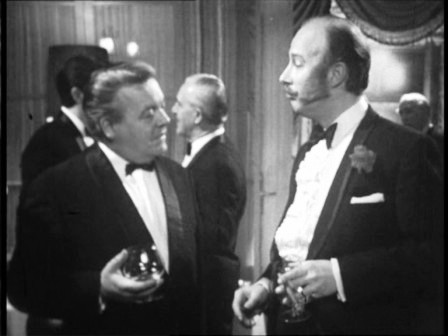 James Cossins had played a cousin of Pamela’s in the second series of “The Power Game” but here is disguised by an extravagant pair of sideboards as the absurd MP Candleford. A self-satisfied buffoon, Candleford is used to raise questions in the House about the strategic list so that Kane can be seen as responding to the will of Parliament. Rhodes Boyson, an extravagantly side boarded MP of the Thatcher government was still a headmaster at the time this made, but it is possible that Candleford was inspired by the exotically-moustached Sir Gerald Nabarro. Berating “long-haired layabouts” he is challenged about his own hair and tells Wilder, “I always say you should earn your whiskers.” He is contrasted with Walter Hallam (Arthur Brough), chair of the Aviation Engineers Association who says he calls one long-haired employees “Lady Godiva”, but says there’s no-one better to do air frame analysis. Looking after Candleford at an Association dinner, Hallam confides to Wilder that, “He makes me want to grow my hair down to my blasted boots if I could! 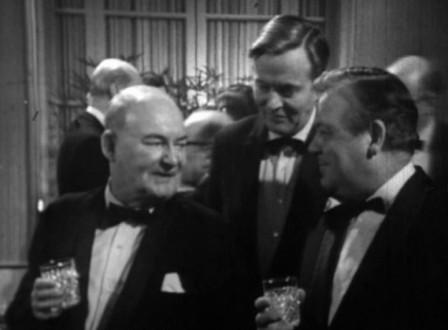 There are hints in this episode that Wilder is beginning to tire of the diplomatic world. At first it seems Wilder is challenging Dowling when he observes how much time the younger man spends with his wife. But then Wilder allows –“One meets too few people who seem absorbed in the things that interests oneself. When one does one tends to cling on to them. I always wished I could have met more such people.”

After dining with Walter Hallam, he tells Pamela that, “I think it’s the most pleasant thing that’s happened to me this week. It made me want to go back into Aircraft.