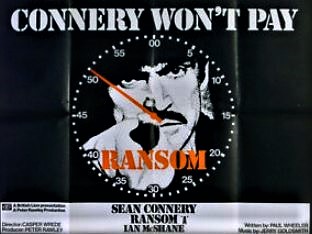 Poster from the 1975 UK release of Ransom

Ransom is notable for being directed by Casper Wrede, co-founder of the Royal Exchange, Manchester and founder of the 59 Theatre Company, which had given Patrick Wymark an early starring role in Danton's Death . Ransom was the Finnish director's follow-up to his controversial adaptation of One Day in the Life of Ivan Denisovich (1970) and tackled a similarly topical subject. Although 'skyjacking' is thought of as an innternational crime, there had been over 150 domestic hijackings of planes in United States airspace in the decade before Charlton Heston starred in Skyjacked(1972). However, in the 1970's international hijacking by politically motivated individuals became a rising threat.

Filmed in Norway, Ransom, is set in the fictional state of Scandinavia where a group of terrorists have taken the British ambassador (Robert Harris) hostage. The British government, represented by MI6 agent Captain Barnes (Jeffrey Wickham), is eager to concede to the terrorists demands for a plane out of the country and parachutes with which they and their hostage (the Ambassador) will skydive to an unknown location! The Scandinavian government, represented by Bernhard (James Maxwell) is equally eager to co-operate in what it sees as a solution to another country's problem. Only Sean Connery as Colonel Tahlvik has an appetite to resist - bluntly refusing to let the embassy staff board the plane as hostages. Martin Shepherd, the leader of the terrorist group, is forced to agree. Shepherd is played by John Quentin (The Lilliputian castaway Fistram in ITV's 1986 series Return of the Antelope). Quentin is dubbed throughout by the recognisably plummy tones of Robert Lang (Skardon in 1990). Since Quentin is introduced with his face distorted by a stocking mask, this means that it's particularly disconcerting when he finally removes the mask.* Tahlvik is unimpressed until, as they leave the ambassadors residence, Colonel Barnes confides that the British know the secret location to which the terrorists intend to parachute.

*Quentin's real voice slips through in one early scene (when he says a Hercules transport plane will suit his needs) and it's very close in tone to that of Jeffrey Wickham. It's possible that Quentin was redubbed to give more contrast between the two characters. 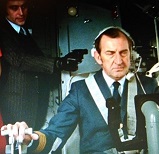 But then a passenger jet approaching Scandinavia's main airport is hijacked by a second group of terrorists led by Ray Petrie (Ian McShane).Petrie warns Shepherd that the British police have arrested one of their group and know the secret location to which he was planning to parachute. The captain of the plane damages the undercarriage on landing. "Let that be your last deliberate mistake!" Petrie warns the captain, revealing that he and his men are wearing detonators linked to bombs which will blow the plane apart.Petrie orders the Scandinavian's to start repair work so that the jet can be used to fly his comrades and their hostages out of the country.

Civil Servant Berhard insists that the operation should end peacefully and tells Colonel Tahlvik not to impede the terrorists. But Tahlvik retorts that if he agrees to Petrie's demands, it will encourage more hijackers to follow. 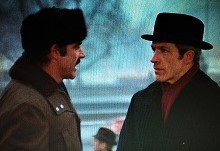 Ransom was scripted by Paul Wheeler, who had written episodes of ITV's Special Branch and Fraud Squad and would go on to script episodes of Minder, Hannayand The Professionals. Ransom balances credible procedural detail with a number of exciting action sequences put together with energy and precision. Towards the end, Wheeler comes up with a credible motivation for Connery's climactic act of bravado. Tahlvik tells the wife of the British ambassador (Isabel Dean) that, "I'm a soldier. it's not in my nature to give in with a gun to my head." Dean retorts that,"The gun isn't to your head. You take risks with other people's lives." She says her husband was captured as a commando in wartime Yugoslavia and tortured, causing lasting heart problems. Tahlvik is stung by her taunt - "He was a soldier!"

Although financed by British Lion, Wheeler's script was commissioned by producer Peter Rawley, who had packaged Wrede's previous movie, One Day In The Life of Ivan Denisovitch. Wrede's clinical and austere setups were photographed by Sven Nykvist (The Virgin Spring, Sleepless In Seattle), and edited by Eric Boyd-Perkins (The Wicker Man). And the film endoubtedly benefits from a stirring Hollywood score by Jerry Goldsmith.

Casper Wrede came from Finland in 1951 to take the Production Course under Michel St Denis at the Old Vic Theatre School. Fellow students during this period included Patrick Wymark and James Maxwell. Wrede would later team up with Michael Elliott and Richard Negri to found the 59 Theatre Company, which put on several ground-breaking productions at the Lyric Hammersmith including Patrick McGoohan in Brand and Patrick Wymark in Danton's Death. Wrede and Elliott would go on to adapt their plays for BBC Television. James Maxwell, who wrote the 59 Theatre Company translation of Danton's Death appeared in several of Wrede's movies, playing Gunyon in Private Potter (1962) and the Captain in One Day In The Life of Ivan Denisovitch (1970) as well as the officious Bernhard in Ransom (Maxwell also played Colin Townley, Secretary of the National Export Board in The Power Game. Maxwell would later join with Wrede, Elliott and Negri in founding the Royal Exchange Theatre in Manchester.

With the current trend in 'Scandi-Noir', Ransom

will probably appeal more to modern audiences than it did to cinemagoers in 1975. Would it be pushing it too far to describe Ransomas 'Scandi-Noir'? Probably. The film shares some aspects - there is an undercurrent of betrayal and disillusionment - but it equally overlaps with the world of John Le Carre.