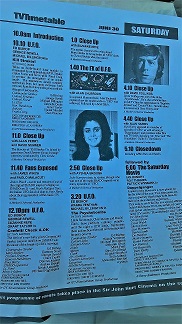 A blazing sun beat down on the Steel and Glass Exterior of the Quad in the centre of Derby’s Cathedral Quarter. As the local military erected their stalls in the Market Place for Armed Forces Day, they little suspected that just yards away, a secret battle against alien invaders was being fought.

With their Hi-Vis Vests, the staff of Markers Universal looked like they belonged to an ordinary logistics company. Little did the public know that they were running a tribute to the Century 21 TV series UFO, or that the woman leading her wheelie-case and dogs through the revolving door of the Quad was Ayshea , a former operative of the Supreme Headquarters Alien Defence Organisation. At the café tables outside the Quad, a couple of Yummy Grannies asked why people kept taking photos of the vehicle outside the entrance. 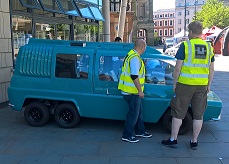 When they were told that it was “one of the last surviving vehicles from the TV series,” they shot back, “What TV series?”

“UFO, the TV series from 1970. That’s one of the original vehicles. James Winch found it in a scrapyard and he’s restored it back to how it looked in 1970”

“Oh, “one of them muttered into her Cappuccino, “I thought it was just a council vehicle.”

“Well, they were supposed to be undercover, so it shows the disguise was working.”

Once past the Markers Universal security cordon, it was clear that the apparently innocuous arts centre had been transformed into SHADO Control. Upstairs, a false wall had been removed opposite the entrance to the Sir John Hurt Cinema. In the unhidden space were exhibitors including Fanderson, Andersonic fanzine and artist Graham Bleathman record-holder for the longest continuous period producing Gerry Anderson merchandising artwork.Graham had brought a fantastic display of artwork including his own recreation of the Doppelganger launch site and a selection of artwork from Look-In and Countdown including a fantastic Gerry Haylock spread from UFO 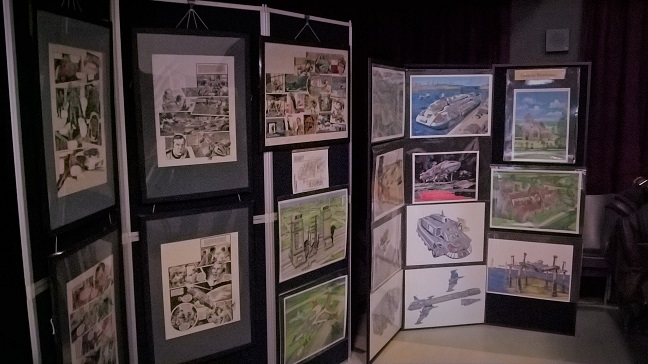 Once again, ticket holders received a goody bag containing a well-designed programme, a couple of inventive Doppelganger-themed TV21 covers by Andy Drewz and a copy of John Kane's resignation letter. 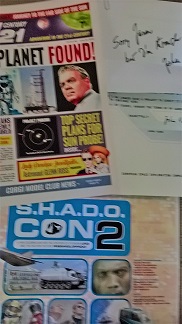 During the day, episodes of UFO were screened, followed by themed interviews. Director Alan Perry and actor David Sumner were interviewed by Chris Drake about Kill Straker, and although David Sumner had very sketchy memories of the episode he did recall liking George Sewell who was a very affable workmate. Interestingly, out of his long career David Sumner was most proud of Monique(1970), an offbeat movie by Doomwatch actor John Bown about a menage a trois. 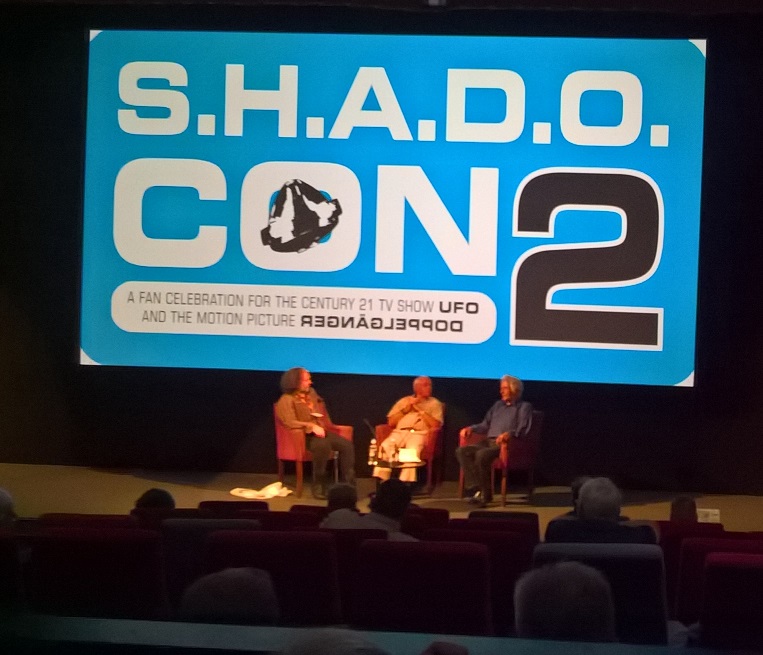 Watching Kill Straker on the big screen, it became clear that this was another of the episodes influenced by Gerry Anderson’s liking for The Power Game. Underneath the science fiction, there is a lot of office politics. Paul Foster (Michael Billington) is conditioned by the aliens to kill Ed Straker (Ed Bishop), but there’s an offhand comment in Straker's final confrontation with Foster that implies Foster’s ambition and underlying criticism of Straker was bubbling unnder the surface all the time and nothing to do with the Aliens. Similarly, the direct refusal by Alec Freeman (George Sewell) to play along with the underhand tactics of Foster and General Henderson (Grant Taylor) is an object lesson in playing it straight. Even after several viewings, the final confrontation between Straker and Foster still crackles and director Perry was rightly proud of it. 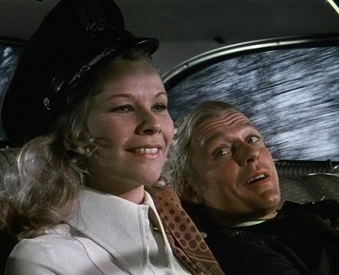 Suzanne Neve (Mary Straker in A Question of Priorities and Confetti Check A-OK) was joined by her husband director Richard Martin to talk about the just-screened Confetti Check A-OK. Suzanne remembered that the scene where Mary Straker fell down the stairs was tense because the stuntwoman had only just returned to work after being injured on Where Eagles Dare. “I’m not sure which of us was more relieved when she completed the stunt.”

At this point interviewer Chris Gibbings read out a note from Barnaby Shaw, who had played John Straker in UFO. Barnaby could not attend as he now lives in Spain, but he recalled some fond memories of his screen mother and father including the fact that Ed Bishop insisted on playing chess with Barnaby when he found out he was learning the game. 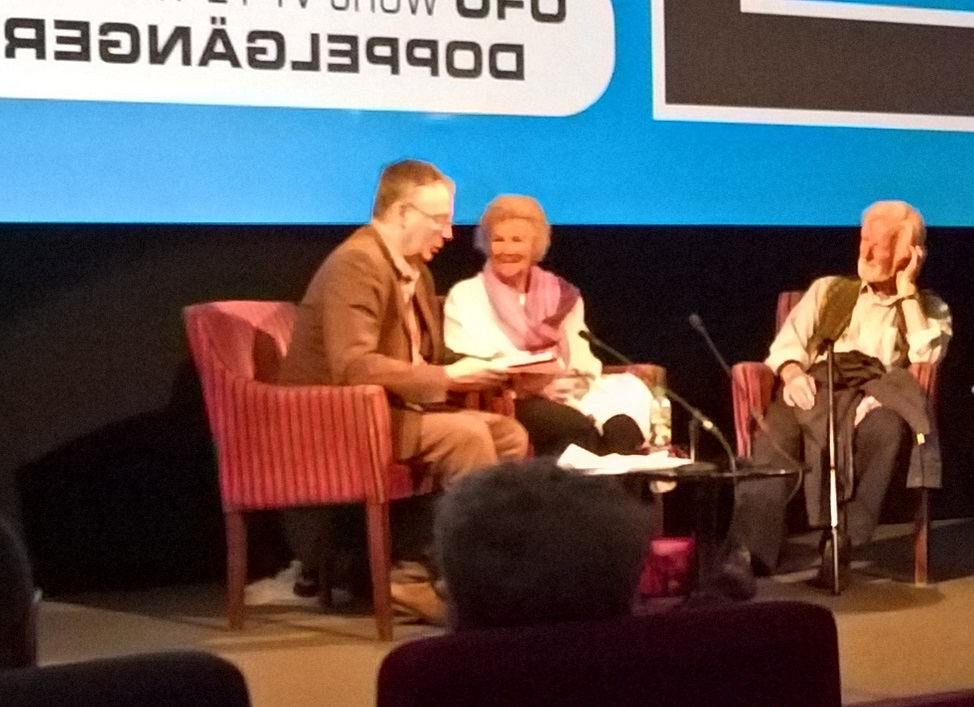 Richard Martin also explained an anomaly in Suzanne Neve’s filmography when he said that he’d never seen his wife under so much stress as when she made The Tape Recorder. This was an Australian play adapted by the BBC, about a woman working as a secretary to save money for her wedding. While transcribing the tape made by a thriller writer, she suddenly realises that the woman in peril described on the tape is a woman in a similar situation to herself. The IMDB and the Radio Times for the 1967 broadcast says Guy Doleman (Colonel Ross in the Harry Palmer films and Stephen Gray in The Power Game ) co-starred in this BBC play. However, the Radio Times for the September 1968 repeat credits Tenniel Evans . It appears that there was an extra layer of reality reflecting fiction as conflict developed on the set and Doleman had to be replaced by Evans (or "lovely Tenniel Evans" as Suzanne referred to him) during production. 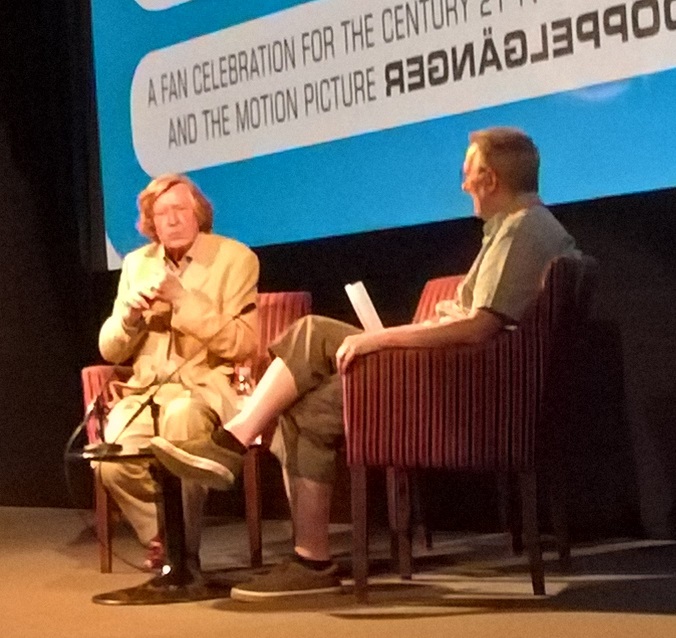 David Collings was interviewed by Gary Finney-Zair about The Psychobombs, and answered questions about his extensive career in series such as Sapphire & Steel. In addition, Alan Shubrook gave an illustrated talk on the special effects of UFO, James Winch and Paolo Malaguti talked to Steve Hardy about their memorabilia collections while Alan Harris and Ayshea Brough talked about performing on the TV series.Where Ayshea had been instantly recognisable as host of the pop show Lift Off, Alan started out as a background artist, but was gradually given lines to enhance the believability of his role as a Skydiver crewman.

Markers had originally said last year’s SHADO Con could not be repeated, but Chris Gibbings was convinced that more could be done by adding Doppelganger, the 1969 Gerry & Sylvia Anderson production which laid the groundwork for UFO. Stars Ed Bishop and George Sewell were first brought together in this movie which also featured actors such as Vladek Sheybal, Jeremy Wilkin and Keith Alexander, who would return in UFO.

As part of the celebration, Fanderson had negotiated a formula which allowed them to launch their members-only CD of the Doppelganger soundtrack at the convention. The CD is a magnificent achievement. Not only does it contain the score as heard on screen from the Universal archive, it also presents Barry Gray’s complete score, performed by 55 piece orchestra, before being amended to reflect cuts in the movie. Listening to Gray’s music, we’re reminded how fundamental the man was to the rich atmosphere of the Century 21 productions and can only regret that he did not get to score more feature films.

Appropriately, Doppelganger was the last presentation of the day. After a 50 minute break, which saw the staff of the Quad Café besieged by attendee’s wanting to cram in an evening meal, we were promised a rare chance, not only to see the movie on a big screen, but also to see one of the few surviving film prints with the original title – before Universal renamed it Journey to the Far Side of the Sun. 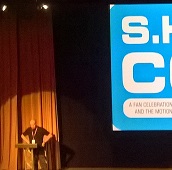 Steve Hardy, organiser of the previous year's event, gave an introduction to the film before the house lights dimmed. 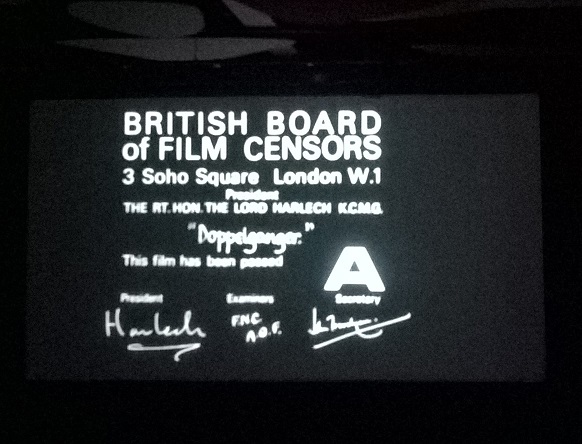 Sure enough, the old Censor’s card flashed up and there it was – a bit fuzzy – a bit weathered – a bit muted - but it was Doppelganger. 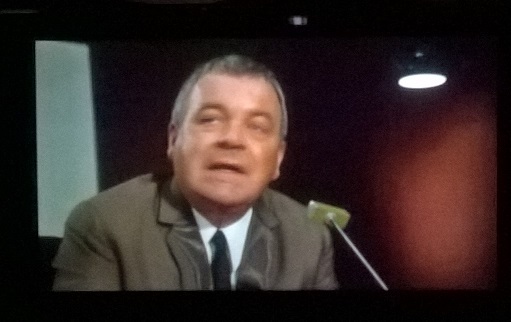 And then, disaster. As Patrick Wymark asked Loni Von Friedl to give the Eurosec meeting full security, the sound faded away. The action continued without words for a few more seconds and then the film print was replaced by a Journey To The Far Side of the Sun DVD. If there was some disappointment that we weren’t going to have the genuine experience of seeing a genuine film projected, there was at least the consolation that we had seen the bits we'd wanted to see - proof that the film was indeed originally released as Doppelganger. 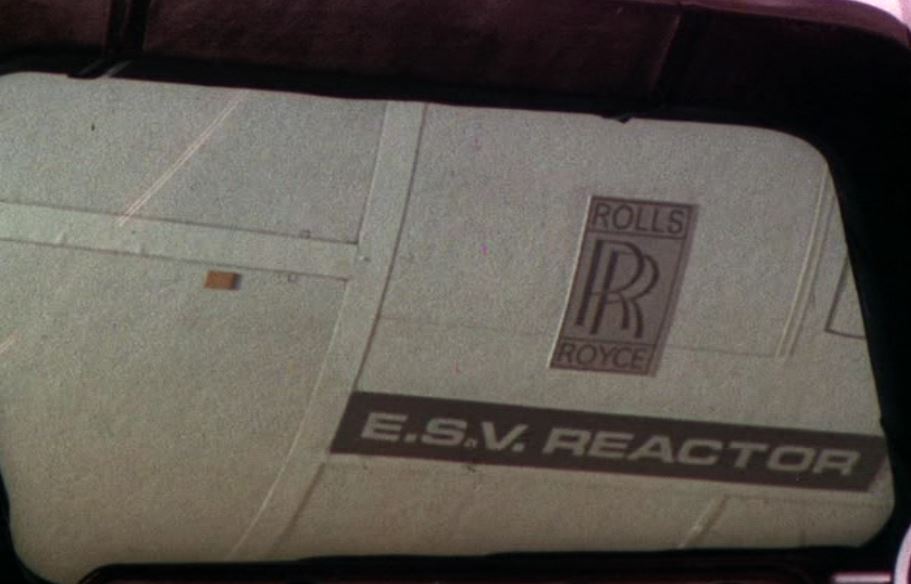 As the movie neared it's climax and we saw the familiar logo of the Rolls Royce engines in the spaceship, it became clear how appropriate it was for Doppelganger to finally get a screening in Derby, the home of Rolls Royce's flagship site.

As we emerged into the cooling, but still sunlit Saturday night, we could be grateful that we had spent the day on the other side of the mirror, experiencing the past or the future, not as it was but as it should have been.