July 7th 189- Dark storm clouds over Whitby after journey across moors by rail replacement omnibus. London train had terminated at York due to unplanned engineering works. One fellow passenger, an amiable buffoon in yellow jacket and red trews prophesied that in a future age, ”Titans of economic rationality will ensure that great swathes of the rail network are supplanted by motor bus routes such as this”. While he buried his nose in his Bradshaw, I reflected that this would only happen if passengers were credulous enough to forsake the comfort of the locomotive carriage for the discomfort of the motorised stagecoach . 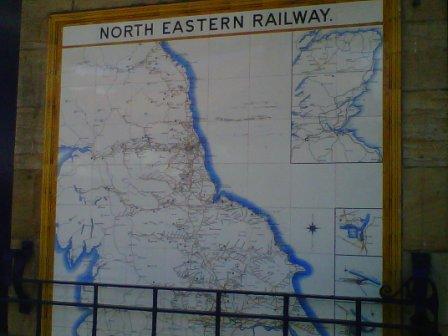 Made my way up the Khyber Pass to Mrs Swales’ Guest House. After pounding on the door for several minutes, I heard the sound of rattling chains, the clanking of bolts drawn back and the grating noise of a key being turned. Mrs Swales, dressed entirely in black stood within, the light of her antique lamp illuminating her grey hair. “Mr Stoker,” she said frostily, “You said you were arriving at Five O’Clock! It’s nearly Seven!” As she led me up a winding stair and along a dark passage, Mrs Swales pronounced the familiar litany of Landlady’s rules. “I provide a hearty breakfast and evening meal. Guests are expected to vacate the premises by nine am each day and not return until five pm. If you wish to have a hot water bath, please give me one day’s notice,”

July 8th 189- Postcard arrived from Sir Henry Irving (Editors note- Stoker’s employer at Lyceum Theatre) beseeching me to abandon my projected novel about a young nobleman adopting a cloaked disguise to battle crime among the lower orders (“It has too much of the penny dreadful about it”). The only member of the company who seemed taken with the idea is our poster designer, young Herman Kahn, who is about to emigrate to New York. Reluctantly agree to abandon the Bat Man.

Determined to remount my steed, I spent the morning in research at Whitby Library. There seemed to be nothing that could provide the makings of a short story and at half past eleven I decided to stroll across the drawbridge over the harbour towards the Abbey. At the foot of the 199 steps leading up to the Abbey I discovered a charming tea shop, and paused for some teacakes and Wensleydale cheese. While capturing the meal with my Kodak, the clock of St Mary’s chimed Noon. An intense young man ran up the steps as if embarking on a life and death quest. (Note to Self – Ask Sir Henry if The 199 Steps sounds like a winning title for a play). 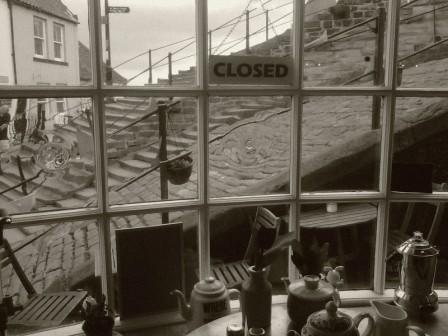 At One-Thirty, I visited The Empire Pie Refectory, recommended by Mr Rayner, the Northern Correspondent of The Times. The shop did indeed offer a “veritable cornucopia of pies to satisfy the most discerning of palates”. I was much impressed by the appearance of my Bulls Blood Black Pudding Pie and had just captured it with my Kodak when a customer entered dragging in one of the many hideous mongrel’s which seem to be the fashion among a certain type of day visitor. He sat at the next table and the constant slavering and snorting of the dog acted as a swift antidote to my previously unstoppable appetite and I left after a few mouthfuls.

July 9th 189- Scolded at breakfast by Mrs Swales for checking Phonograph at table. I explained to her that it was the most efficient method of immediately capturing one’s thoughts and was very much the coming thing. “It may be the coming thing in London, “she replied, “but it will be the going thing in Whitby! It’s very anti-social! The other guests don’t want to hear your opinions about the pie shop!” 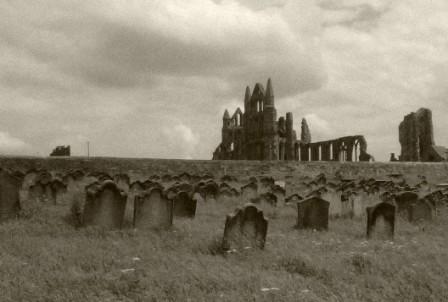 July 10th 189- A most remarkable evening. Mrs Swales had left some cold cuts for the guests with a note to say she was attending the Annual General Meeting of the Whitby Landladies Standards Committee. I felt some relief, as I had discovered some fascinating research materials at Whitby library and now knew I would be able to review my Phonograph records without fear of further chastisement. Indeed I spent a most productive evening in the lounge. But as the clock struck eleven, I heard a fearful commotion at the doorway. Harsh soulless laughter preceded Mrs Swales and her fellow landladies into the room. They weaved drunkenly, giving me time to perceive that Mrs Swales had invested much preparation in the evening. Her grey hair was now artificially dark, her pale cheeks now seemed ruby red, and she now displayed a fine décolletage. “Oh Mr Stoker, “she slurred, “I do hope me and my colleagues won’t be disturbing you.” “Not at all,” I said as I began to gather my materials and muttered something about retiring for the night. Suddenly, one of the landladies put out a restraining hand. “Oh no chuck, it’s still early.” Another of the landladies moved forward and ruffled my beard! “Yes ducky, the night’s still young!” Suddenly, with a feline hiss, Mrs Swales swooped forward with the speed of a panther, pushing them aside. “Leave him alone, “ she snarled, “this man belongs to me!” (Here the excerpt ends)