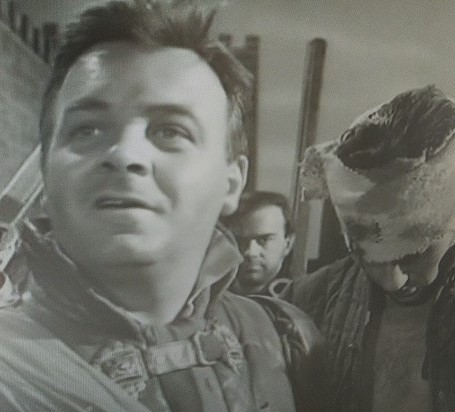 Sir Francis Drake starred Terence Morgan as the seafaring adventurer and Jean Kent as the first Queen Elizabeth. Although the series prided itself on its historical accuracy, it was very much a 'New Elizabethan' view of history. If Gene Roddenberry claimed to have based Star Trek on Captain Horatio Hornblower, then Sir Francis Drake can equally be viewed as an Elizabethan version of Star Trek with the hero 'boldly going' where no Englishman had been before. The science fiction parallels are unconsciously deepened by the casting of Drake's main antagonist. Originally hired for the title role in The Governor's Revenge (fourth in production although screened later), Roger Delgado was retained to play a different continuing character, Mendoza, the Spanish Ambassador. This was some years before his role as The Master in Doctor Who 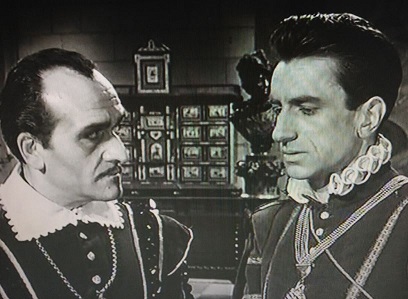 Roger Delgado as Mendoza, the Spanish Ambassador and Alex Scott as his scheming assistant Don Pedro

Sir Francis Drake was a co-production between Lew Grade's Associated Television (which, until 1968 provided the weekday ITV programmes to the Midlands and the weekend service for London) and ABC, the weekend contractor in the Midlands and the North. Reputed to be the most expensive British film series in TV history, the show was aimed firmly at the family audience. Originally screened from September 1961 at around 4pm on Sunday afternoons, the series was given a 1963 repeat run by ABC at 5.15 on Saturday evenings, and was repeated frequently throughout the 1960's

While Grade's company owned ITC, dominant producer of 1960's ITV film series, ABC was controlled by Associated British Picture Corporation, landlords of the Elstree film studios where most of those series were made. ABC funded relatively few film series ( The Human Jungle and The Avengers) and the reasons for collaborating with ATV on what was then one of the most expensive British TV series in history are lost to the mists of time (although it is likely it served the interests of both parties).

The series was originally announced in February 1961 as King of the Seas. It wasn't until May 1961, with ten episodes in the can, that the show was given an official publicity boost as Sir Francis Drake. The series was produced under the auspices of Trans-Continental Films by Anthony Bushell. A successful actor ( Colonel Breen in the original BBC TV version of Quatermass and the Pit), Bushell had also been assistant producer in charge of casting on all Laurence Olivier's films including Hamlet (1948). Coincidentally or not, the actor playing Laertes in this movie had been Terence Morgan. While Morgan had gone on to carve out a career as villains in crime movies like Piccadilly Third Stop, his experience of the seven minute swordfight with Olivier in Hamlet gave him the swashbuckling manner to incarnate Sir Francis Drake.

Associate producer Harry Fine was another actor, turned casting director. Fine would go on to produce Man Of The World and Sentimental Agent for ITC, before producing movies such as The Long Day's Dying (1968 - directed by Peter Collinson, starring Alan Dobie) and Hammer's Karnstein Trilogy, beginning with The Vampire Lovers (1970). Style was quoted in publicity for the series as saying that casting was the key element in getting a series like this right. And the series featured a notable line-up including 19 year-old Michael Crawford as Drake's real-life nephew John and Howard Lang (later Captain Baines in the BBC's long-runnning The Onedin Line) as Grenville, Drake's Number One. The ship's crew also included Milton Reid (from Hammer's Night Creatures as Diego. Reid ( who would appear with Wymark in Blood on Satan's Claw ) also had a parallel career as wrestler, The Mighty Chang.

Script Editor Ian Stuart Black was grateful in early publicity that he had been given "a few months to prepare scripts instead of the usual hectic few weeks." and worked with a variety of writers from Britain and America to generate storylines that would entertain a family audience while getting over a few historic facts. It was noted at the time that Black also ensured the dialogue had just enough musicality to suggest the Elizabethan era without compromising the directness of the 20th Century.

The Garrison, written by Black was the first episode to be filmed, going before the cameras in February 1961. Each episode was turned around with a one week shooting schedule, the production taking up two sound stages at the ABPC studios in Elstree. One stage held the standing set of Drake's ship, The Golden Hind, while the second stage held the set for Westminster Hall, and the besieged garrison. At this stage, a seagoing replica of Drake's vessel was being constructed, but it would not be ready for second-unit filming until the Summer, with exterior shots of the Golden Hind cut into the action at a later date .

The Garrison is set in the Dutch Netherlands, where Elizabeth was covertly financing the rebels against Spanish rule. In the opening scene Sir Francis Drake is bringing provisions to the British Garrison at Blanckenburg where 500 men have been under siege for six months. As The Golden Hind nears the fort, Drake sees that the Spanish are right up against the walls. He questions why Captain Williams has let them get so close, but then his ship comes under cannon fire from the Spanish. With no covering fire from the fort, Drake is forced to retreat

Returning to the court of Queen Elizabeth, Drake is criticised by Sir Miles Burns (Laurence Naismith - Jason and the Argonauts) for abandoning his duty. Drake argues that no honest garrison would allow the Spanish to sit so close to its walls but Queen Elizabeth takes offence; "Sir Miles raised this army at my orders. Paymaster and General he may be, but they are MY men!". Incensed, Drake sails back to Blanckenburg and takes a small landing party to scale the walls of the fort (without forcing the parallels too far, this is very much like Captain Kirk beaming down to a planet besieged by Klingons to solve a mystery). 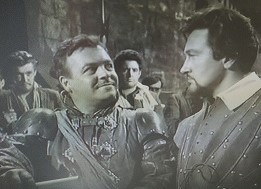 Watching a lone sentry fight off a Spanish attack, Drake is greeted by the weary Captain Williams (Patrick Wymark) who musters his wounded and starving men and stands them to attention. "We were 35, " Williams tells him, "Now only 13!" When Drake says there are supposed to be 500 men in the Garrison, Williams asks to see the roll call. As he reads out the names, Williams recalls the battles at which they fell. "Sir Miles has peopled this Garrison with ghosts." It's obviously a trick to pocket the payroll. Drake asks how Sir Miles thought he could get away without being discovered. Williams answers that the 13 would soon die of starvation. The Spanish would take the fort and Sir Miles would say his men had died in battle. No one would be any the wiser. As the Spanish attack again, Drake and his men join the garrison, firing off muskets, dashing from spot to spot to give the impression their force is greater. Williams tells Drake they only have small arms, which is why they weren't able to provide covering fire when Drake was attacked the previous month.Drake comes up with a plan to destroy the causeway which links the Spanish forces to the mainland. Without the bridge, they won't be able to attack again until the Spring when the tides are low.

Returning to the Court of Elizabeth, Trevelyan (Patrick Mcloughlin) announces that the siege is ended and invites Sir Miles to inspect his troops. In front of the Queen, the dumbfounded Sir Miles has no choice but to accept. Needless to say, Stuart Black comes up with a fine resolution which sees Sir Miles brought to a kind of justice. Although it is a kind of justice. Strangely for a family show of the 1960's, the truth is concealed at the end for a more political resolution.

In the role of Williams, Patrick Wymark looks for once quite young. Williams is described as a "Welsh terrier" and Wymark plays him more like a Sergeant Major, fierce but sentimental. Once Wymark is introduced, his affection for his men and his suppressed outrage dominates the scene in which Sir Miles' deceit is uncovered. Morgan wisely stands back in this scene. Wymark must have impressed Bushell here, as a director he subsequently cast him in The Mind Reader an episode of Man of The World and the Scales of Justice featurette A Woman's Privilege

It goes without saying that Sir Francis Drake took an idealistic view of historic characters whose motivations were very different from those that might be wished in the 21st Century. As noted above, there was very much a Festival of Britain, New Elizabethan viewpoint in the series which glossed over the fact that Drake was (as the French title for the series put it ) The Queen's Pirate. Faced with a potential invasion by King Philip of Spain, Queen Elizabeth encouraged privateers like Drake to attack Spanish shipping bringing gold and silver from the Americas. Drake was knighted in 1581 after his circumnavigation of the globe, which brought the Queen more looted treasure than the entire annual income of the Crown. Drake is a controversial figure today because he had some early involvement in the slave trade. Ironically, the character of Diego, played by Milton Reid in the TV show, is loosely based on an African slave who escaped the Spanish in Panama and joined Drake's service as a free man. Not surprisingly, there is some outrageous fictionalisation in the episode The Doughty Plot. Series producer Anthony Bushell plays Tom Doughty, the friend and financial backer of Drake's circumnanigation who was eventually executed on Drake's order. Doughty and his co-financiers (Bob Grant of On The Buses and Frederick Jaeger of Pretendersand Special Branch) are depicted as entitled and undemocratic from the start. Doughty eventually goes over the edge,inciting a mutiny which leads to the attempted murder of Drake. The facts as known are very ambiguous - John Thaw and Paul Darrow later played Drake and Doughty in Drake's Venture, a 1980 TV Movie written by former Plane Makers director John Nelson Burton and directed by Laurence Gordon Clarke of MR James Ghost Story fame. Produced by Westward Television to celebrate the 400th anniversary of Drake's circumnavigation, the film takes a darker view of events.