Technical staff must face against the clock to devise a technical solution to problems with the Sovereign exposed by a newspaper leak. But crucial expert Gareth Edwards (Aubrey Richards) is alienated by security officer Todd (Ewan Roberts). 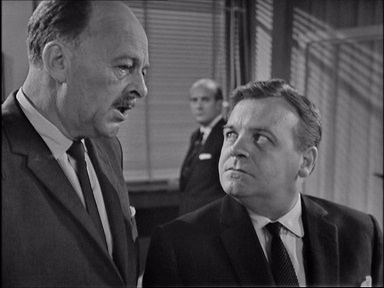 The Sovereign is taking 25 yards more than it should to take off at full load because the engines aren’t delivering full power. Technicians theorise that the position of the wings are starving the engines of air. There are two possible solutions – either redesign the wing or install a special baffle which Gareth Edwards has suggested.

Edwards is a dedicated design technician – the problem with the Sovereign arose on the Friday and he’s been working on the problem at home. To management, an employee who'll work in his own time to solve a problem is a valued asset. But from a security perspective they present a risk that they're misusing information. Todd uses duplicate keys to search Edwards’ office and desk drawers in the early morning. He has been alerted by “the usual sources” that Edwards’ 19 year old son has joined the Communist party and this makes Edwards a potential security risk.

As the day progresses, Edwards senses that he is under suspicion for the leak to the newspapers and becomes increasingly paranoid, comparing Radley Heath to a concentration camp and walks out as the deadline for the design of his baffle approaches. The reference to concentration camps is ironic. Wilder is initially supportive of Todd with whom he worked in Germany in 1945. “He did quite a job there. Needling out war criminals wasn’t child’s play.” Set during the 'Cold War', The Plane Makers existed against a background where the aviation industry depended on Government contracts and their technology was at risk from commercial competitors and 'unfriendly powers'. 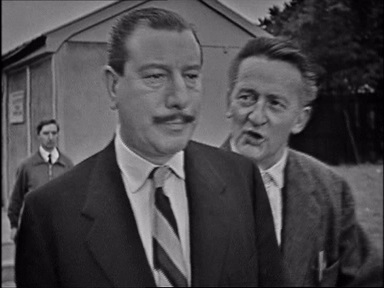 Greatorex layers several themes on the story. Todd’s thoroughness is compared with the attitude of the manual workers who are at best laid back and at worst out for themselves. Most of the workers had either served in the war or done national service and were keen to aggravate militaristic types like Todd. Greatorex also examines the double-standards of commercial life. Technical secrets are to be kept under lock and key, but at the same time the company will turn a blind eye to technicians like Edwards taking work home to solve a problem in their own time. Even Wilder has to make sacrifices of a sort, telling Pamela to cancel a social dinner date so they can entertain a foreign buyer and reassure him about the newspaper story. While Edwards saves the day, Wilder instructs Technical Director Tom Bancroft (Douglas Muir – Steed’s boss One-Ten in the early Avengers episodes) to “get his job covered” realising that there is a risk in one man being indispensable. As Bancroft tells Edwards, “You’ve done yourself no good today.” 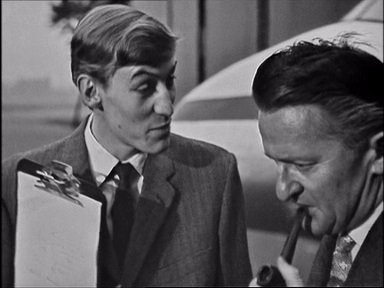 Jeremy Coles (Geoffrey Whitehead) unwittingly fuels Edwards' paranoia by repeating a conversation he had with Todd over lunch.

The episode is slightly constricted by the inherited format of the series. Although we now have the continuing storyline of the Sovereign's launch and the continuing character of Wilder, episodes like this still feel like single plays with characters we won't see again. Edwards’ paranoia seems to develop far too quickly (helped along by a gossipy early role by Geoffrey Whitehead as an admin worker who picks up on the security officers' speculative comments over lunch). There are also a few ambiguities. Geoffrey Chater plays Simon Stride, the Public Relations Officer. In dramatic terms he serves the same function as the Sales Manager, providing a sounding board for Wilder. But there’s an ambiguous scene where the reporter who wrote the leaked story arrives at the factory to meet Stride. It’s not clear if this is meant to depict business as usual or imply that Stride himself is behind the leaks.

This episode also introduces the character of Tom Bancroft, the self-serving Technical Director played by Douglas Muir. Bancroft is a man trying to preserve his own position while managing a team of specialists whose abilities outstrip his own. Bancroft would return in the March 1964 episode, "Bancroft's Law".There’s an odd scene where Wilder comments about Technical Director Tom Bancroft that, “C.P.Snow has a lot to say about people like that.” Stride replies to Wilder's query as to whether he's read Snow's work with the ambiguous comment, "Powerful Stuff" (shorthand for "No, but I won't admit it"). Snow had explored management incompetence within British universities in his "Strangers and Brothers" novels. His then recently-dramatised book "The Affair" (1959) had dealt with the issue of a scientist being accused of fraud and explored the difficulties of managing and evaluating the work of an expert when very few people (including the manager) actually understood the technicalities of the work. Snow had also written in 1959 about the tension between “The Two Cultures” – with the British elite favouring an arts education and looking down on science. This resulted in an arts educated class of administrators making decision for the technocrats which was impeding scientific progress. In 1963, he had written of a “third culture” which might mediate between the technocrats and the administrators, so ensuring progress. Wilder might be seen as an example of this "third culture", while Bancroft would be explored at greater length in the March 1964 episode “Bancroft’s Law”.

The concepts behind this episode would recur in February 1964’s “A Job for The Major” and Edmund Ward’s third series episode “It’s a Free Country – Isn’t It?”