“Everywhere I look, I find men working to their own advantage.” Arthur Sugden. 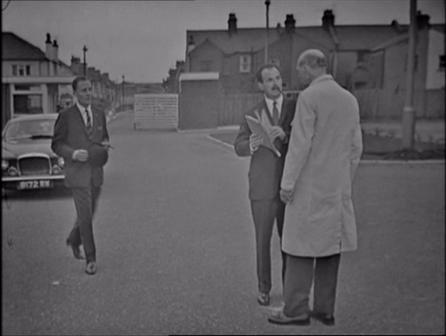 Another episode that reflects the series’ origins as a collection of plays with a shared background, “All Part of the Job” could easily have been made into an “Armchair Theatre” production with a different industrial background. Set in the purchasing department, the plot concerns efforts to move production forward in an emergency and the deals that must be done with sub-contractors to make it happen. But the underlying theme is what happens when an incorruptible man faces temptation.

Stanley Meadows, who would appear in “The Ipcress Files” and “Widows”, here plays Hamilton, an ambitious junior in the purchasing department. While his senior is on leave, we see Hamilton amusing himself playing games with a sales representative when he has no intention of buying from him. When an order for tropical modifications to the Sovereign has to be pushed forward, Hamilton visits a sub-contractor to try and cut the delivery schedule for parts. During the visit, he begins to suspect that Chief Buyer, Norman Reynolds, may have awarded the contract for personal reasons.

Reynolds is a man of outward rectitude, appropriately played by Noel Johnson, the radio voice of four square heroes Dick Bartonand Dan Dare. When Reynolds returns from holiday, he quickly realises that Hamilton has suspicions about the contract. Patricia Haines, who would appear in The Night Caller (1965) and body-swap episode of The Avengers, “Who’s Who”, here plays Secretary Mrs Pearce. She acts as a form of disapproving chorus, although in actions more than words. Haines, Meadows and Johnson all convey the sweaty paranoia and tensions of office life through expressions that say more than the dialogue. (Below, Noel Johnson and Patricia Haines) 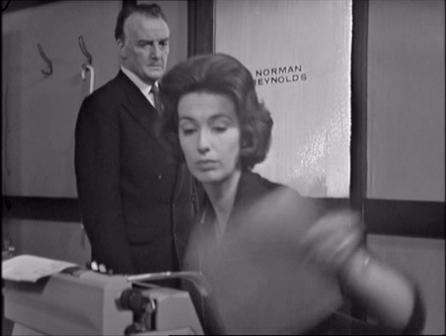 The theme of “men working to their own advantage” is reflected in background scenes as a tin of domestic paint bought through the firm is exchanged for theatre tickets and an executive has the machine shop tooling a discontinued part for his vintage Lagonda. When Reynolds explains to Sugden that he accepted a holiday off the sub-contractor only after the contract had been awarded, we never know if it is true, and even if it is, the effect on Reynolds’ self image is plain to see. The fact that his wife has had a nervous breakdown and benefited from the holiday may be seen as special pleading, but underlines that temptation can come in many forms.

Scriptwriter Richard Harris began his career with the final episode of “Police Surgeon” in 1960, and quickly became a prolific contributor to crime dramas ranging from Public Eye to A Touch Of Frost. He created “Spyders Web”, and co-created “Man in a Suitcase” with Dennis Spooner. Harris also wrote the popular stage comedies Outside Edge and Stepping Out, and his “Saturday Night Thriller” episode, “The Business of Murder” (1981) was turned into a stage play which ran for eight years on the West End with Richard Todd and Francis Matthews among the leads. American born director James Ferman came to England with the USAF before studying at Kings College, Cambridge. In 1975 he became the Secretary of the British Board of Film Classification, where he had a controversial 24 years supervising cuts to and bans of movies.

As noted before, producer Rex Firkin avoided expensive location filming costs by using outside broadcast video trucks that covered football matches at weekends, to record The Plane Makers' exterior shots during the week. Firkin further kept the costs down by using ATV Studios as the location for the Scott Furlong aircraft factory. The episode opens with the administration building which would later become familiar in “UFO” and (after its purchase by the BBC) “Grange Hill” and Holby City”. But the episode is interesting for scenes showing an alternate entrance behind a housing estate and the various workshops. (Below, Stanley Meadows as Hamilton and Reginald Marsh as Sugden ) 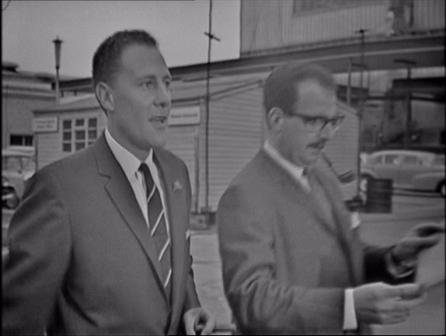 The episode also shows Sugden settling into his new office as General Works Manager. He has managed to retain his chain-smoking secretary Margie (Elizabeth Begley) although she complains that it took her an hour by bus to get to the head office and says she might get a car. “A car?” Sugden jokes, “I had trouble enough getting you here. You’ll be asking for a rise next.”