'How Can you Win If You Haven’t Bought A Ticket?' Writer Wilfred Greatorex. Director Unknown

“It’s the beginning of the big squeeze. You’d better get that desk cleared for a hand-picked Wilder yes-man.” Arthur Sugden 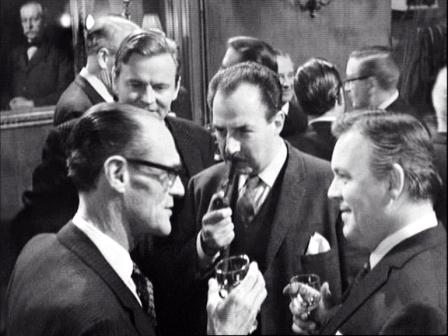 As Arthur Sugden’s six month trial period nears its end, he detects a number of snubs and obstacles being placed in his path by John Wilder. He learns by memo that production meetings are being relocated to Wilder’s office and is given only one day’s leave instead of the three he’s requested to attend an aero engineer’s conference where Sugden is delivering a paper(Confirming that the snub is real,Wilder tells an astonished Miss Lingard to pp the memo, claiming that he has writers cramp).

Wilder himself is frustrated by Sugden’s refusal to shorten production schedules for a modification to the Sovereign. Wilder is hoping to sell Sovereigns to the Anglo Air Company. “If we can unload six Sovereign’s on a domestic airline like Anglo, it’s as good as a royal warrant.” Wilder plans for Henderson and himself to waylay Anglo’s Gilbert Corey at the aviation conference. However, Wilder is for once surprised to learn that Corey and Sugden know each other, having served together in the RAF during the war.

This final episode of “The Plane Makers” sees the resolution of the conflict between Wilder and Sugden. In the second episode Wilder opposed Sugden because of his background, “His technical experience is beyond question. But every man has his personal ceiling.” In this episode, Wilder tells Don that, “I admire his Northern millstone integrity and all that, but the Sugdens of this world are obsolete. Like bedsocks. He’s just a big boy scout.”

In other words, Wilder needs a production schedule that will sell planes rather than build planes. When Sugden says the other directors, Keeble and Katz will support his findings, Wilder replies, “They may or may not support you. But they don’t need these faster production times. I do. And in the final analysis Sugden, the general works manager can only be on one side. MINE.”

Indeed, the two other “technical high priests” Katz and Keeble are willing to try and give Wilder the figures he needs when they learn the prospect of selling to Anglo.

As Chairman, Sir Gordon Revidge expresses a similar viewpoint to that expressed in “How Do You Vote”. Even though he wants Wilder removed, he expects unity in the command chain. He says to Keeble (Martin Wyldeck) that the end of his six month trial is hardly the time for Sugden to disagree with his Managing Director. Keeble asks what if Sugden’s right, and Revidge replies “I hardly see that being right is relevant.”

Nevertheless, the episode confirms how respected Sugden is in the aviation industry. Keeble tells Revidge that Wilder, or more particularly Sugden is the man to talk to about production times. And when Wilder introduces himself to Gilbert Corey (Peter Madden) at the aero engineer’s conference, Corey says, “I suppose you’re here for the Sugden paper. Now there’s a man who knows what he’s talking about.”

Sugden also teaches Wilder the effect of leaving an opponent with no hope at all. Having invited Corey to dinner, Wilder asks Sugden to give him the revised production figures to discuss over dinner. Sugden reminds him that “I’m on a day’s leave. That’s all I was allowed.” Wilder asks if he’d refusing to co-operate, and Sugden replies that “cooperation is a two-way thing.” When Wilder tries to pressure him by asking if he thinks this is going to improve the chances of his reappointment, Sugden snaps, “What chances?”

As if to compound the error, Wilder later tells Sugden that won’t be recommending his reappointment. Sugden has two alternatives; be demoted back to his old job at Radley Heath or resign. Saying he’s , “ put too much sweat into this job to have my throat cut that easily.” Sugden meets with Corey, asking if there’s a job for him at Anglo. Although Sugden refuses to say why he’s asking, Corey guesses that it’s a conflict with Wilder. Later on, while negotiating the aircraft sale, Corey tells Wilder that his board would insist on continuity of supervision. “If I do recommend Sovereigns its going to be pretty difficult to put through with your works manager being fired.”

Sensing that it’s a deal-maker, Wilder confirms that Sugden will stay. When he says he expects that Sugden and Corey were good friends in the RAF, Corey replies that he tried to get Sugden court martialled. Sugden insisted on thorough checks of the Lancaster’s and Corey wanted as many planes as possible up in the air. Eventually, Sugden overstepped the mark and Corey saw a way of removing him. But soon after, there was a crash killing scores of men. “ I don’t like Sugden. But by god I trust him.” 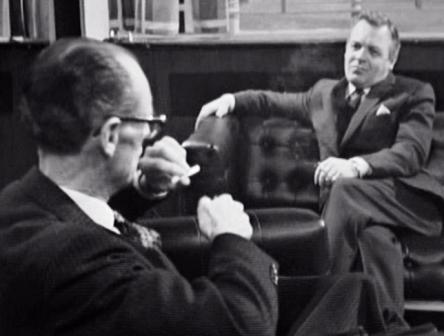 The episode also brings a temporary resolution to the conflict between Wilder and Revidge. Wilder overplays his initial approach to Corey, intimating that Henderson has been using social engineering to discover the company is unhappy with its American supplier. Instead of trying to defuse the situation Wilder snaps, “what do you want – ethics or aeroplanes?” It never occurs to Wilder that someone might want both and when the chairman of Anglo complains to Revidge, Sir Gordon sees this as an opportunity to have the board remove Wilder. Only the fact that Corey has just signed a contract for six Sovereigns saves Wilder from censure. 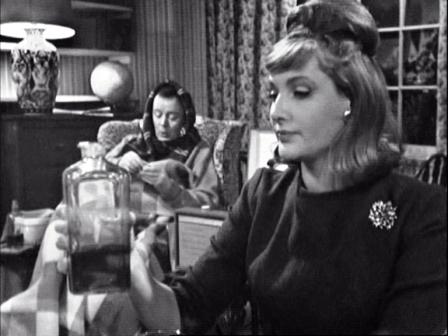 Barbara Murray is given an opportunity to illuminate Pamela Wilder’s fears. She is appalled by the prospect of her husband triumphing over Sugden, saying Arthur is “vulnerable..because he’s an honest man.” She sees herself as a “frequent adjunct at business dinners. Highly polished to impress.” Pamela wonders how much longer she will be required, telling Wilder he is, “ a charming destructive little boy. At the moment you’re on top of the world and I’m part of it”. However, Pamela also questions how much longer she can stay by his side. “Perhaps it’s not enough through. Perhaps I’m tired of being a bystander at his Roman triumphs.”

Our final view of Henry Forbes (Robert Urquhart) is of the pilot suffering from cartoon flu, wrapped in a blanket with a towel over his head. Pamela, who is visiting for liquid consolation, says,“You’re a strange man Henry. You live in this gentle world and you only come out of it to earn your living in one of the most dangerous professions there is.” For his part, Henry explains his never having married by saying “One gets set in one’s ways. There’s an inevitable isolation. It’s part of the job.”.

When Sugden asks Corey about a job at Anglo, he’s told “There’s nothing big enough for you.” That and his reception at the Aero Engineers conference indicates the regard with which Sugden is held, but also his weakness. Returning to his old job at Radley Heath would rightly be seen as a demotion, but there would be few comparable jobs to go to.

When Sugden’s appointment is confirmed, Wilder offers him the cigar he refused at the end of the second episode. He offers Sugden some advice. “A man once said how can you win if you haven’t bought a ticket. You’ve just bought a ticket but that doesn’t mean you’re going to win. You see. We’ve all got tickets.”

There is no director credit on this episode. It is possible that producer Rex Firkin directed this final episode (as he would do in "The Power Game") and was uncertain of taking the credit or alternately it could be an error.

This episode concludes “The Plane Makers” series two. The first series, of which only one episode survives, was a collection of plays connected only by the background of the Scott Furlong aircraft company. The second series introduced a number of continuing characters, mainly at boardroom level. However, a number of episodes gave the impression of being single plays, tenuously linked by the main characters (who sometimes only appeared in a couple of scenes). Most British TV series run for 13 episodes, but The Plane Makers ran for 27 and it is in the second 15 episodes (making up Network’s Volume 2 DVD) that the series became more cohesive. From “How Do You Vote”, increasing attention was paid to continuity, returning characters and background themes. In short, the groundwork was laid for the format of the continuing TV series – as distinct from a serialised story, or a series of plays connected only by the lead characters.

The series also made a star out of Patrick Wymark. In “The Homecoming” even Sugden had to admit that Wilder was “a brilliant man.” The combination of excellence and single-minded selfishness (both professionally and personally) made Wilder a complex lead character who Wymark brought vividly to life.