“Out of the seven nights that go up to make a week of my loosely-termed married life, I tend to find myself alone on at least four of them for one reason or another. Does it surprise you so much that I should go out, now and then, to find someone to talk to?” Pamela, Lady Wilder.

Sir John Wilder returns home unexpectedly one evening to find Pamela out. He suspects that Pamela has been having an affair and is oddly distressed. Frank Hagadan (George Sewell) is due to unveil his new road-building machine, but gossip spreads that Hagadan is Pamela’s lover. For Susan Weldon, this is an opportunity for Wilder to divorce Pamela and marry her. For Caswell and Ken Bligh it is a slow-burning fuse that could blow Bligh Construction apart. 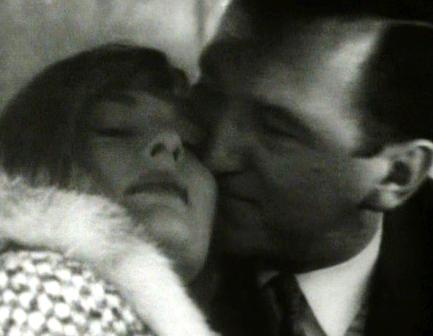 After the damp squib of “The Switch” last week, this episode provides the fireworks that have been expected since “Hagadan”. The business strategy becomes little more than a plot device as the episode focuses on Wilder's three-way relationship with Susan and Pamela. Patrick Wymark shows a rarely-seen aspect of Wilder, perplexed, hurt and bewildered as he learns that Pamela is having an affair. Not knowing who to trust or suspect, not willing to ask the right words for the answers they might bring. Once he learns that Frank Hagadan is Pamela’s lover, we can only expect an almighty showdown. If Wilder was willing to sack an employee for a drunken altercation (in The Plane Makers episode “How Do You Vote”) what will he do if he thinks someone has been sleeping with his wife?

Hagadan’s road-building machine, which prepares foundations “at half the time and considerably less cost” than conventional means needs another two or three months of adjustments to make it economic, but is capable of putting on a convincing demonstration. Wilder is aware that their competitors are saying he won the M27 contract by putting down unrealistic figures, and that Bligh’s will fall down on the job.“They don’t like being undercut,” Wilder tells Hagadan, “And they don’t like being undercut by so much. It makes them look foolish at best. And at worst that their figures are seriously far out.”

Wilder has arranged a cocktail party for the coming Friday, at which he will introduce Hagadan to the competition and then give a live demonstration of the machine on waste ground outside. As the rumour of Hagadan’s affair spreads, Caswell Bligh tells Kenneth that the company would have to complete the M27 at the bid price, even if Hagadan’s machine was not complete. “The premature departure of Hagadan would be more of a cost to Bligh’s than the loss of Lady Wilder’s chastity.” 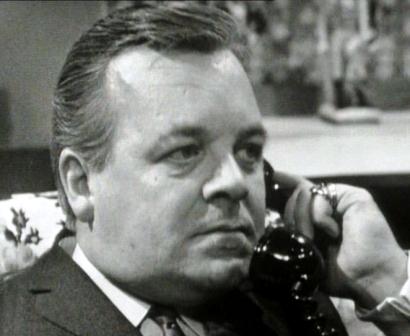 Once again, Peter Draper provides an elegant script in which even the small-talk is lively and significant. Caswell Bligh admires Pamela Wilder’s teacups and she tells him they were a wedding present. “You’ve been lucky to be able to keep them so long,” Bligh observes. Caswell offers to put his country cottage at Pamela’s disposal, if she and Hagadan agree to be discrete for a few weeks. “I’m not making a moral judgement. As far as I know your relationship may be completely innocent. I’m not concerned with its nature. Only with its existence.”

Peter Draper explores Wilder's culinary preferences once more. During a post concert meal with Susan Weldon, he orders Coeurs a la Creme for afters telling the waiter they'd better prepare it now, "I don't want it with cream and sugar. I want it with finely chopped chives." You can read more about the significance of this scene here .

For once Jack Watling has an opportunity to make Don Henderson both touching and amusing as he confronts Frank Hagadan over two halves of bitter. “It has come to my ears,” he says, in best public school manner, “That you’ve been seeing rather a lot of certain lady. It’s got to stop. I’m not prepared to stand by and see her name dragged through the mud.” 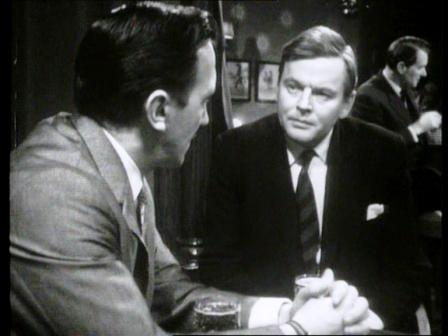 “And you’d rather you were getting it than me,” Hagadan retorts, leaving a chastened Don sipping at his beer as he tells him, “As Santa Clause said to the turkey, Donald, get stuffed.” Comparing notes, , Pamela and Hagadan agree to put their affair on hold. Pamela knows that Wilder would try to blacklist Hagadan in the UK and Hagadan would go back to another highly paid contract in Italy.

It’s noticeable that when George Sewell’s character was introduced in “Hagadan” he was seen literally cold-shouldering Don out of the way when Don tried to look at the plans he was showing Wilder. Earlier in this episode Wilder has observed that Don doesn’t like “my blue-eyed boy”. In the third act, Don gives his opinion of Hagadan as, “What they used to call a rotter! All that brash, ‘I can do anything – just watch me’ – out to get to the top! Obviously as soon as he saw the boss had a pretty wife..he’s out for all he can get.”

Pamela gives a contrasting opinion. “He’s not brash really. He’s very gentle. He’d rather do a good job because it is good, not to defeat someone else and make a million. But he’s in your world, so he takes you on your terms. He takes the top rate and he makes you feel uncomfortable by telling the truth.”.

Susan Weldon (Rosemary Leach) is angry that Wilder will not take the opportunity to divorce Pamela and marry her. She tries to rationalise it (“She’s a possession of yours!” ) but is unsettled by his reaction. “If you divorce her, there’s still me. And if you don’t divorce her, there’s still me. What about me? I am not incidental to you. I’m not one of your employees. And I’m not your whore!”

Wilder’s final confrontation with Hagadan takes place as the assembled heads of the construction industry gather in the meeting room at Bligh’s head office. When Hagadan agrees that he loves Susan, and she loves him, Wilder prepares to explode; “I brought you here…” 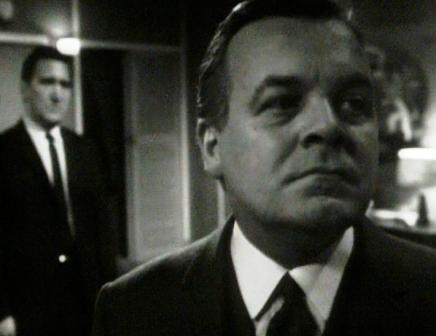 When Wilder threatens to finish him, Hagadan retorts, “No you wont…There’s more people against you than for you, and most of them are in that room there. I can get a job in ten minutes under your nose. And they’d do it just to see the look on your face.”

Hagadan agrees not to see Pamela again and Wilder says that he will complete work on the machine and then finish out his contract on a project in Libya. The episode ends with Wilder introducing Hagadan to the construction heads gathered at the cocktail party, and turning to look at Pamela who silently toasts him. Wilder's expression is haunted. For now, in the game of marital power, Wilder has won, but his confidence has been shaken. 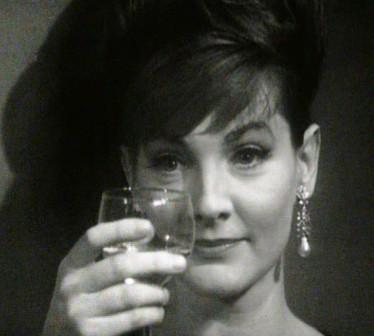 Unfortunately the set designers weren't prepared for Patrick Wymark's flourish as he enters his office to confront George Sewell.He slams the door shut, only for it slowly to fall open. Hanging his coat on the hook, Wymark calmly pushes the door shut as he turns to glare at Sewell

Discussing Wilder's marriage, Hagadan tells him, "You should have thought of that when you were playing pattycake with your popsy in Paddington!". With a straight face, Wilder corrects him: "Notting Hill"