Previously on “The Power Game”, Managing Director Sir John Wilder (Patrick Wymark) had discovered that his wife Pamela (Barbara Murray) was having an affair with engineer Frank Hagadan (George Sewell). Wilder had agreed to let Hagadan complete his revolutionary new road-building machine on condition that Hagadan then go to Libya to finish his contract with Bligh Construction. Wilder continues his affair with Susan Weldon, a civil servant at the National Export Board, but she comes under renewed scrutiny as industrialist Bob Gillingham (Ralph Michael) becomes the new chair of the NEB and her protector Colin Townley (James Maxwell) is replaced as secretary by the ambitious Sefton Kemp (Ian Holm). Back at Bligh Construction, joint managing director Ken Bligh (Peter Barkworth) has exploited his reputation for previous business failure. Ken manoeuvres Billy Straker (John Tate) into pulling out of a joint-venture in Africa leaving Bligh’s to exploit the profitable deal Ken has negotiated.

In tonight’s episode of The Power Game: Sir John Wilder decides to go into a joint-venture with rival company Infells on the M27 road construction project. But Frank Hagadan is Infells new project manager. After a stormy negotiation, Wilder prepares to drop the whole project, but Ken Bligh keeps it alive. Meanwhile Sefton Kemp prepares to reactivate the security investigation into Susan Weldon unless she assures him that her relationship with Wilder is over. When Wilder meets with Susan he is unwilling to break off the relationship. Nevertheless, at Wilder’s insistence, Pamela meets with Hagadan to tell him their affair is over. 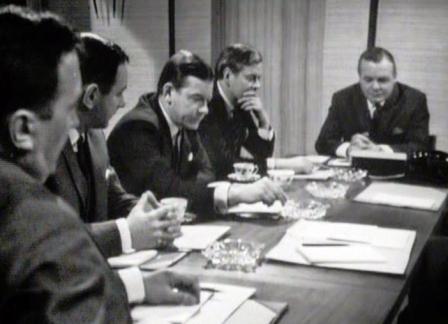 This third script by Peter Draper continues to see the dynamics reversed as Wilder is blown off-course by his emotions while Ken Bligh astutely asserts himself and Sefton Kemp pushes home his advantage at the National Export Board.

The opening scene gives no clue to this upheaval. It looks like another “Wilder wangle” as Ken Bligh arrives at the office to see Wilder bidding a warm farewell to executives from the rival construction firm Infells. Despite being joint Managing Director, Ken is unaware that Wilder has been negotiating with Infells and intends to go into a joint-venture on the M27 contract. Instead of being exasperated at another quixotic change of direction, Ken replies, “It fascinates me. The last time I mentioned it you’d changed your mind…YOU decided we couldn’t handle it on top of all the other things.”

Wilder seems to be in full charge as he tells Ken and Don Henderson to “keep Infells warm” while he takes four days off for “a personal matter”. The scene cuts surprisingly to a ski holiday with Pamela. In their hotel room Wilder looks forlorn in a tightly fitting 1960’s ski jumper as they discuss Pamela’s affair. She assures him it’s over and he asks, “Is that because Hagadan is in Africa and you may never see him again or under any circumstances? How do I know when you’re with me you’re not thinking about him.” 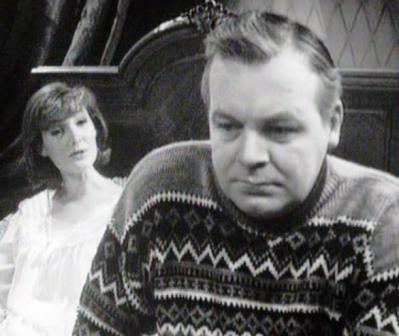 Pamela asks how he really expected her to keep on loving him when his life was moving further away from her and she seemed to have no part in it. She recalls what he was like at 35. “I sometimes think the only reason you really want other women is to prove to yourself that time is not rushing past quite as fast as you think it is. And if I can just hang on, you’ll realise it rushes past just as fast for me.”

But although Wilder agrees with Pamela, he is still unable to break off his relationship with Susan Weldon. At her flat, Susan berates him savagely for going on holiday with Pamela saying, “You were disturbed by…that business with Frank Hagadan. And you were surprised you were disturbed. It changed you!” In the end, Wilder is unable to resolve the situation and suggests they put it to one side while they discuss her problem with Sefton Kemp. 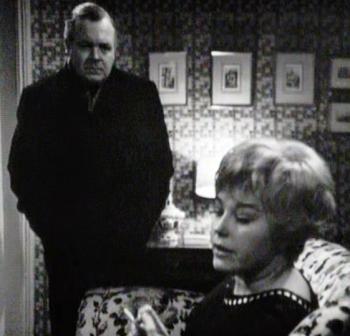 But when Wilder learns that Hagadan is back in London, her urges Pamela to meet Hagadan and tell him their affair is over, “Now he’ll do anything he can to see you. A letter doesn’t work. Tell him to his face. Leave no doubt in his mind.”

Hagadan’s return comes as a climax to Part One of the episode. We later learn that Hagadan gave his notice in to Bligh’s Africa office which was slow to update head office. So Wilder has no clue that Hagadan has left the company until he walks in with the Infells negotiating team.

The confrontation between Wilder and Hagadan works dramatically although it’s also amusing. It doesn’t come off like The Plane Makers episodes “The Old Boy Network” or “Costigan’s Rocket” as if someone has decided to write a comedy episode. Nevertheless, with a bit of rewriting it could easily be a standalone comedy sketch. The construction terms Hagadan uses are valid, but they could just was easily be nonsense with comic intent. 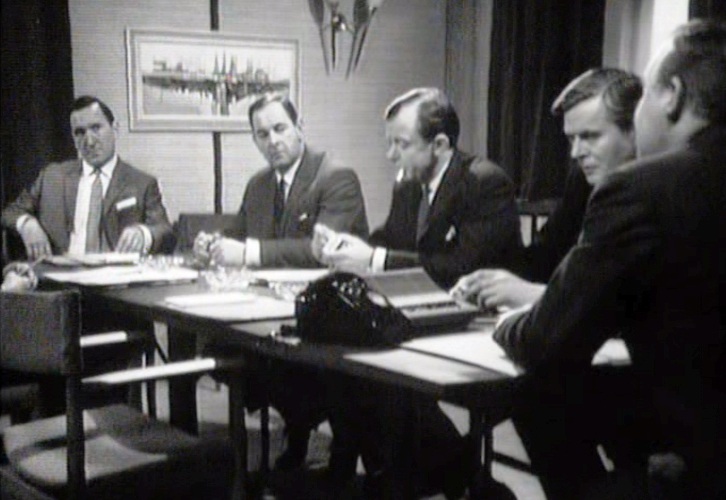 The argument starts over a seven mile stretch of land which Hagadan says is the most difficult area. If they get it wrong, they won’t make a penny profit on the deal. Sam Bell (Peter Hager) from Infells, asks what Hagadan would do. “Well, I should think we’ll have to swamp shoot for about three miles (Bell narrows his eyes and draws on his cigarette)…that won’t be too difficult (Bell nods in agreement). Then we lay three feet of hardcore over the peat and run the vibrator over it….(Hagadan looks across the table at Wilder) What would you think about that?”

Finding an excuse to come out of the meeting, Wilder tells Ken to drop the joint venture. “If it starts like this, it’ll end in open bloody warfare before we’ve got a skip of dirt out of the ground.” But Ken decides that as joint managing director he has the right to see the deal through, and that he will lack Wilder’s emotional involvement. At the end of the episode, we learn that Sam Bell has inevitably taken Hagadan off the job – no one man ( or two men) is going to stand in the way of a lucrative joint venture.

This episode sees some fine performances. Wymark goes on a trajectory from insecure to explosive – once again, as in The Plane Makers bemoaning a situation of his own creation where everyone expects him to make all the decisions. Rosemary Leach is raw and unfiltered as Susan, angry and bitter when she thinks Wilder is going to drop her. Ian Holm as Sefton Kemp is entertainingly bullying when he suggests that he’ll have to bring Security back in, to decide whether her relationship with Wilder is a risk.

“This is my Department and I’m responsible. To be responsible I have to know in my own mind. That’s the least that’s expected of me by my superiors. The position at the moment, Miss Weldon is that I don’t know.”

Kemp also delivers a low blow when he says that she’s having an affair with a member of the NEB who is married. He adds that the fact Wilder is married is not relevant. “Then why did you mention it?” Susan asks. “Because our little problem is unlikely to be resolved by you marrying him, is it?”

Ironically Susan’s position is saved at the end not by Wilder but by Gillingham, who decides that he doesn’t want Security back in the NEB. Despite Ralph Michael’s surface charm and geniality, he makes it clear he won’t use security for a fishing expedition saying, “We should be very careful we don’t use the security services as agents of persecution.” While Kemp has said his superiors expect him to know in his own mind that there is no risk, Gillingham now asks if he has proof that there IS a risk to national security. More pertinently, if security is called in too often people will think there’s an ongoing problem with the NEB and that (it is implied) will reflect on Gillingham.

The episode reasserts Ken’s growing assurance at Bligh’s and while it throws Wilder off balance, by the climax order has been restored. Pamela has ended her affair with Hagadan, Wilder still has his source within the NEB and his relationship with both women is back to where it was. Although Wilder is complimentary about Ken’s progress, we know that his ultimate aim is to set Ken against his father and then wrest ultimate control of Bligh’s from the winner.

Although the term “Persons and Papers” was mentioned by Townley in “The Switch” and will be defined in the following episode “Trade Secret” but is hardly relevant here since it refers to the powers Kemp and Gillingham seek to make people give information to the NEB.

Like Patrick Wymark, Peter Hager (Sam Bell) would appear in "The Battle of Britain" as Filed Marshall Albert Kesselring. <