In the House of Commons, MP James Fielding (Philip Brack) revives the question “like some great stupid terrier” of how many National Export Board members are directors of the same company. The Minister defends Bligh and Wilder (without naming them) saying they have contributed so much. Meanwhile, Sefton Kemp (Ian Holm) and Bob Gillingham (Ralph Michael) continue to press for the NEB to extend its powers to compel any firm or body to give evidence. Caswell Bligh is opposed, saying it would compromise secrecy. But the NEB has asked for an explanation of Bligh Constructions’ success in the communist controlled state of Matabelia and if Bligh does not answer it will compromise his position on the Board.

As noted, although the previous episode was titled “Persons and Papers”, the title didn’t seem relevant there whereas this episode centres on Sefton Kemp’s attempts to widen the powers of the NEB “I did not leave the Treasury to be shunted into a dead end.” Bowen even provides a scene, (“Persons and Papers. It’s a very pretty way of putting it”) explaining the term to Justine Bligh (Rachel Herbert).

Caswell Bligh (Clifford Evans) is united with union leader Ted Newark (Philip Madoc) is being opposed to the expansion of powers, although both have different reasons. With some irony, Bligh raises the precedent of Senator McCarthy and the House Un-American Activities Commission but he speaks from self interest. The parallel probe into Bligh Construction’s success winning contracts in Matabelia highlights the contradictory relationship between the West and Iron Curtain countries during the cold war. Formerly “Milner’s Land”, the “independent” Matabelia now runs on state aid from the East Germans. We learn from Ken Bligh that during the war, his father entertained a lot of visiting socialists, and one of those East German friends now controls Matabelia.

It looks like the solution to the mystery is, as Kemp puts it, “the old boy network” but Wilder continues to probe and uncovers something more complex and cunning. The solution will give Wilder what he wants, with Caswell Bligh forced to resign from the NEB. There’s a fine gentlemanly scene between Clifford Evans and Ralph Michael as Bligh concedes the inevitable and Gillingham expresses his regrets. But this is topped by the reaction of the Minister, who tells Gillingham that he’s just stood up in the House expressing confidence in both Wilder and Bligh. If the evening papers announce Bligh’s resignation he’ll look a fool. “Tell Bligh if he still wants to resign in six months time he can develop a weak heart or prostate trouble..but at this moment in time he’ll bloody well stay where I want him.”

While quick-cutting is the norm today, “Trade Secret” was made at a time when TV shows were recorded as if live with bulky electronic cameras trailing cables across the floor and the rapid sequence (carried off flawlessly by Quentin Lawrence) must have seemed revolutionary.

It’s tempting to see “Trade Secret” foreshadowing Bowen’s later works like “Robin Redbreast” and “The MacGuffin”. Not just because of the odd remark by Wilder about “love words” that opens this review. It’s a mystery story, but the solution to the story isn’t what we expected. And even when exposed, the solution becomes irrelevant because greater forces (in this case the Minister’s public image) take precedence.

Bowen revives the character of Paul Budge (Fred Ferris) first seen in “The Politician”. Budge is the man in charge of overseas contracts for Bligh Construction, although Bligh has dominated the department. It’s made clear in “The Politician” that Caswell Bligh has been playing a deceptive game- Publicly embracing the Government’s demands for exports to cut the balance of payments deficit, but privately restricting Bligh’s overseas projects because he wants his name to be visible on UK construction projects. Wilder had tempted Budge to feed him information with the proposition of becoming a Director. Now Budge tells Wilder that he’s realised he’ll never be put on the Board. “When a man of my age knows he can’t go any higher, he concentrates on simply staying where he is for as long as possible by not taking sides.” 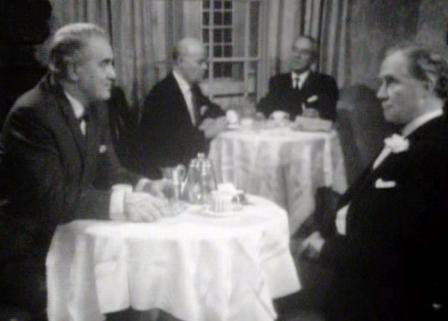 When the NEB starts asking questions about Matabelia, Caswell Bligh tells Budge that Ken has suggested they move him to Geneva. What would be an exciting prospect for a younger man, is a threat to Budge. His arguments are prosaic but heartfelt. He’s finally got the plantain weeds out of his garden after seven years and his wife is active in the local townswomen’s guild. Although Caswell relents, Budge obviously realises that his knowledge about Matabelia is dangerous to Bligh and perceives that the safest way to neutralise that danger is to let Wilder bring it out in the open. Budge drops a broad enough hint for Wilder to start digging.

Rosemary Leach shows some more assertiveness from Susan Weldon when she tells Wilder she’s asked for a transfer from the Civil Engineering Committee. Wilder says he needs her on the Committee and she replies that, “Having a mistress in 1966 means more than buying expensive meals and jewellery…. There are a lot of other things involved. Like consideration and affection. I won’t say love. So I’m telling you my darling. If you really want a mistress it’s time you started working at it.”

There’s a nostalgic scene of 1960’s domesticity – Ken Bligh can’t sleep and sits up in bed lighting a cigarette. Justine wakes and he offers her a cigarette. “Can I have one of mine?” she says, “They’re on the dressing table.”

This was the last episode of the series to be shown for some months as Prime Minister Harold Wilson announced a General Election on 28th February – the date when the even more politically charged “The Man With Two Hats” was scheduled to be broadcast.