“It’s not for me to judge men, Sir John. Only their books.” Davis, the auditor (Eric Dodson) “By their figures ye shall know them. And knowing them dig their graves, eh?” Wilder

Caswell Bligh cuts short a holiday in Barbados when he learns that Sir John Wilder has called in a firm of auditors and has hired a public relations consultant Geoffrey Packard (Michael Goodliffe) to promote Wilder through Bligh’s. Caswell arrives to find his father’s memorial stone removed from the lobby to make room for a map of the company’s international projects, and is just in time to save his bronze bust from being removed.

Following the revelations of Bligh’s sanctions busting in the previous episode, Wilder has an excuse to bring in the auditors, although his real target is evidence of the wartime fiddles (revealed in “Late Via Rome”) on which the company was founded. Wilder sends Don Henderson to track down what he thinks is the Clerk of Works “fixed” by Bligh and Billy Straker during the war, but even Wilder is surprised when Don finds out that Bligh Construction has been making secret payments to the local Conservative Party. Wilder concludes that the famous Socialist millionaire (who earlier stood for selection as a Labour MP) has been laying off against the prospect of a Conservative government. But Ken Bligh declares that he authorised the payments without Caswell’s knowledge.

“WILDER (Stopped by the General Election) FIGHTS AGAIN” said the TV Times, introducing the final two episodes of The Power Game. As Anthony Davies explained, “this was the story which should have been seen on March 1, the day after Mr Wilson announced the election date. But because it is concerned with payments by a big industrial company to Conservative Party funds, and the decision of young Kenneth Bligh to stand for election as a Conservative member of Parliament, it was withdrawn at the time.” . 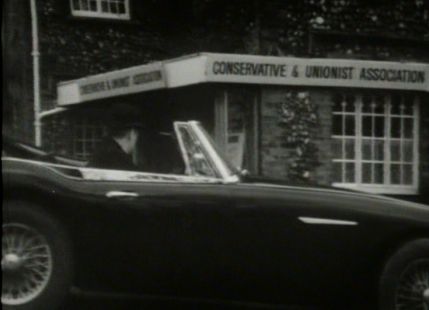 With the expectation of an election announcement in the air, The Power Game’s regular Monday slot had been filled by imported series on most ITV regions, before ATV’s new series “Mrs Thursday” was brought forward on Monday 9th March starring Kathryn Harrison as a charwoman who inherits control of a company. With the 31st March election delivering an increased majority for Harold Wilson’s Labour government, The Power Game had to wait until 13 June for a two week slot at the end of “Mrs Thursday’s” run.

The postponement from February must have made Caswell Bligh’s winter holiday seem a little jarring in the opening scenes. However, a Conservative victory would have made the episode seem even more anachronistic since several plot strands turned on the chances of a Conservative victory at the next election. It’s not surprising that Wilfred Greatorex argued against postponement. But ATV and the Independent Television Authority agreed that, “it would not be right to transmit the programme during the election period.” And it would have seemed odd for ITV to go ahead, when the BBC had even postponed the puppet series ‘Pinky and Perky’ because their next scheduled episode had been “You Too Can Be A Prime Minister”

“The best public relations is not only done, it’s NOT seen to be done.” Says Packard, the PR man brought in by Wilder, “ Nobody will see it being done, but Bligh’s will be you, and you Bligh’s. They may see Blighs over the door, but they will read Wilder

Michael Goodliffe (still a few years away from the role of Section chief Hunter in “Callan”) is charming as Geoffrey Packard, ‘The Man With Two Hats” of the title. Like Peter Jeffrey’s character in “The Plane Makers”, he is a PR man and politician, although Packard prefers to stay behind the scenes. After learning that Kenneth Bligh (Peter Barkworth) is behind the payments to the Conservative Party, he tells Ken that the MP in his local constituency is about to be “retired” and from market research Ken matches the ideal candidate profile; young, happily married, children, Church of England.

“Big business has more talent than the Lords and the Commons put together, ” says Packard, “ but the talent, generally speaking hasn’t the time. You, for a while it seems to me, have the time….for as long as the heavyweight bout lasts.”

Wilder sees a benefit in Ken’s ambitions – “I know the Minister…but I don’t know the shadow Minister.” Ken is quick to perceive that Caswell backs Labour, Ken will back the Conservative’s, but Wilder will back the field. “That,” Wilder tells him, “is the privilege of the neutral.” 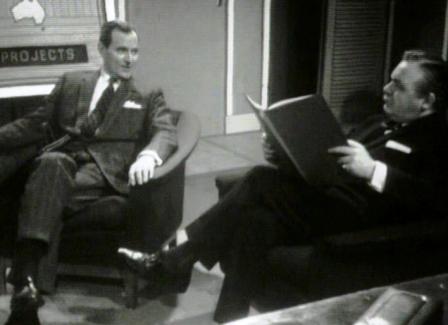 Jack Watling delivers a nicely judged comic performance as the increasingly frustrated Henderson is sent across the south coast in search of dirt on Caswell. He admits to having misgivings, if not regrets about rejoining Wilder. “At Scott Furlong, no matter how dirty the game, you could always have the feeling he was responsible for 12,000 men’s jobs. Now it’s mostly casual labour. Like people from another planet”

After the earlier mystery of the state of Don Henderson’s marriage, he says to Pamela that, if she’s on her own, “Pat could always come into town.” Seeming to confirm that his marriage is still on.

For those keeping score Packard notes that Caswell Bligh is 58, Wilder’s 49 and Ken is 36.

Thanks to Caswell Drake for the research assist