“I would hate to think of you going to the Treasury just because of this Main chap. I should miss you.” Sir John Wilder

Caswell Bligh (Clifford Evans) works behind-the-scenes to get Susan Weldon (Rosemary Leach) promoted to deputy secretary of the National Export Board, reasoning that she won’t “jeopardise the plum she’s been reaching for,” by giving Wilder further help. 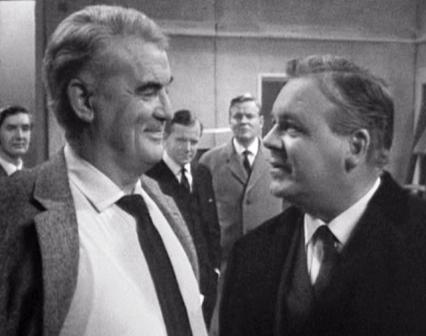 Ken Bligh (Peter Barkworth) and Don Henderson (Jack Watling) discover that the Bligh Construction specification for the Italian project has no provision for the housing of construction workers. Wilder shrugs it off saying that part of the project has been sub-contracted to Bacciardi, an Italian company. But Ken discovers that Bacciardi is a fish merchant. “How, if you’re a fish merchant, can you fulfil a contract to erect houses?”

After the high-pressure of “A Matter For Speculation”, Peter Draper delivers a relatively laid-back episode. George Pravda plays Bacciardi, who spends much of the episode misleading Ken and Don with his cheery tourist act as they try to discern what Wilder has agreed with the fish merchant – “If it’s a good scheme we have to be on John’s side against father,” Ken tells Don, “If not we have to be with father against John.”

Wilder regards it all with amusement, eventually agreeing to take Don and Ken into his confidence. “Bacciardi is not a fish merchant; At least not in your rather unimaginative sense. He delivers food in lorries insulated by plastic he produces, which can be moulded to any wagon or any size. If it keeps cold in, it can keep cold out.”

Bacciardi has agreed to share the cost of constructing the worker’s village because he needs to demonstrate the viability of plastic dwellings.

“You only have to stop thinking of a house as a conventional structure. This will be a plastic house and it will have a plastic shape. It doesn’t have to please anybody aesthetically because it’s completely utilitarian.”

This slightly science fictional revelation (you can imagine a sequel appearing five year’s later in the BBC Doomwatch series) inspires Ken. When Caswell opposes the idea, Ken berates him. “You only ever think of your image. You never think ‘is it a workable idea? Is it suitable for requirements’? Only ‘has it ever been done before? Nasty new idea! How’s Bligh’s going to look?’” 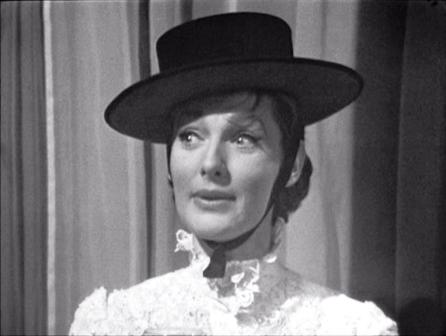 Barbara Murray as Pamela Wilder looks lovely in this scene, but she's saving it all for Hagadan.

Ken and Wilder take “the big view”. But Caswell also has his own “big view” planned. Don has been trying to discover why Freddy Cutter (Bill Horsley) of Architects Malpet and Keen is measuring up the top floor store-room . The answer is that Caswell has decided to install a penthouse flat to give himself an excuse for dropping into the office.

After the slight disconnect of previous episodes, “The Big View” sees an attempt to link back to previous stories. After his previous arrogance, Wilder is now shown waiting at Susan’s flat hoping to see her. Wymark gives quiet sincerity to his enquiry after David Main (from “Ambassador Status”) and his question as to whether she is moving to the Treasury.

Pamela is shown dining with Charles Grainger on behalf of Wilder (“I’m really just a runner with a message on a cleft stick”) but then meets with Frank Hagadan for an afternoon at the zoo.

There are some interesting views about Susan Weldon’s suitability for promotion. Charles Grainger says, “the ghost of John Knox still haunts the corridors of power.” There’s an implication that a woman needs a sponsor to get though.

In retrospect, this is a perfectly “good”episode – there are no massive revelations or confrontations, which makes it seem slower-paced, but the “big idea” in this episode is easier to grasp than some of the previous stock manipulations. Considered in isolation this is an enjoyable story.