Wilder has instructed Pamela (Barbara Murray) to “cultivate” Hindlesham (David Savile), Lord Bligh’s private secretary so that he can learn Bligh’s plans. Belieivng that Bligh intends to take credit for a deal with Yugoslavia, Wilder brings First Minister Kidrich (George Howe) to Hackton Hall, the Wilder's country house to keep him out of Bligh’s clutches. Wilder and Don Henderson have discovered that the caretaker is in hospital, the electricity cut off and the house up for sale. They go to the village to try and get the electricity reinstated, but Pamela arrives with Hindlesham at the house.

Pamela meets Yugoslavian secretary “Fredalina” Vanek (Gay Hamilton) in the old kitchen and assumes she is her husband’s latest conquest after she hears her call out “Darling”. She doesn’t know that Fredalina was calling out to Dowling (Michael Jayston) who has been out scouring the copse for wood to burn in the range. Pamela heads back to London before Wilder can prove his innocence.

Lord Bligh has suggested that Pamela sell the family home now to avoid Capital Gains Tax. But Bligh is meeting Naranda (Bari Jonson), the African Minister who was forced to flee his country after Wilder exposed his bribery in “One From Zurich”. The British Government has allowed Naranda to enter the country via a loophole and he is now looking to buy Wilder’s country house to bring his family into the country . 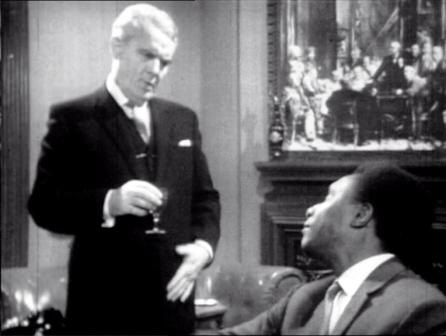 This and the following episode “Without Prejudice” make up a two part story that could arguably have been told as one. Perhaps the producers “owed” Raymond Bowers an episode. Unfortunately most of this first episode is played as a farce with comic comings and goings and misunderstandings. It’s particularly unfortunate that Jack Watling is brought back to do very little. Both Henderson and Dowling are there to type up a report for Wilder and the hapless Hindlesham (David Savile) serves to accompany Pamela Wilder through this episode.

There is a lot of Noel Coward style bickering between the Wilder’s which produces one good speech from Patrick Wymark: “We have to behave in public – to hell with private – in such a way that will not send shivers of delight down the grubby backs of the clean-mouthed, clean-living, dirty minded tax payers who are lusting to chop us down when we show the first sign of the common humanity that they’re too narrow-minded, jealous, or incapable of enjoying for themselves except by proxy through their Sunday newspaper!”

The real scandal is, of course, that Bligh and Wilder are both vying for the glory of negotiating a trade deal with Yugoslavia. 1n 1966 Yugoslavia was a non-aligned communist nation. Its leader Marshal Tito played NATO off against the Warsaw Pact and also cultivated the emerging powers of China and India. In a similar way, Bligh had sent Wilder to Belgrade to get him out of the way while Bligh negotiated with Kidrich. But thanks to his inside connection with Bligh’s private secretary, Wilder knew that Kidrich was already in London and had come back to spirit Kidrich off to his “country house”.

When Wilder returns to his London house, both Henderson and Dowling are installed typing up pages of a report which Wilder intends to present to the Foreign Secretary under Bligh’s nose. Wilder is dictating the report on a then state-of-the-art Dictaphone and several minutes of screen time are used watching the tapes go backward and forward as Wilder thinks he has found proof of his innocence (Fredolina, the Yugoslav secretary, pronounces Dowling as “Darling” so when Pamela heard her in the kitchen calling out to “Darling”, she was actually calling out to “Dowling”). 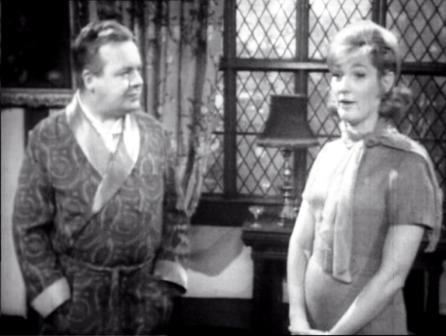 While Wilder tries to convince Pamela that he wasn’t having an affair with Fredolina, he is unaware that Bligh is setting him up for a fall, having arranged for Naranda to enter the country.

Wilder is surprised when Pamela introduces him to the prospective buyer of their house, but Naranda explains that he cannot return to Malia; “My job as Minister of Home Security was to cultivate the Chinese publicly so that the left would not notice my Brother-in-law the Prime Minister was adhering to the British secretly. The right don’t want me because they think I’m pro-Chinese, and the left think I failed them.” Patrick Wymark’s non-verbal reaction is polite enough to signal that he accepts what Naranda says without altogether believing it.

Nevertheless, Naranda says he needs a home because he’s entered Britain as an alien dependent. His father, a bus conductor, has been a British resident for 17 years. While this gives him an “in”, we also know that the Immigration Service consulted Lord Bligh over Naranda’s application.

Back in Bligh’s office, Dowling has brought over some of the Dictaphone tapes including the conversation with Naranda. They ponder, “What if Wilder finds out Naranda intends to fill the house with Malians brought over on fiddles to avoid the immigration controls”? 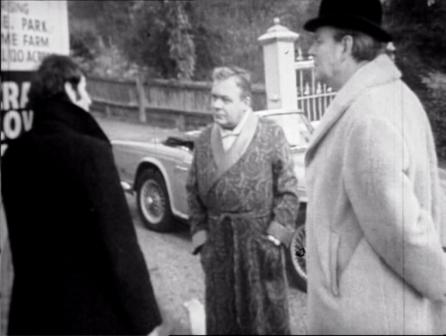 Once again, an episode from 1969 has echoes in the 21st Century with the fear of immigration. Only a year before, in 1968, the newly independent Kenyan Government had begun forcing Asians out, creating fears of an “influx” of immigrants. In March 1968, the Labour Government capitulated to those fears by invalidating their British passports. A strict quota was imposed, with a loophole left for those Kenyans whose parents had been born in Britain (who would invariably be white).

Unfortunately, for any audience members who had stayed with this flaccid episode expecting a clever resolution, the story ends on a cliffhanger..