ōNo-one can get John Wilder on Race Relations when heÆs being divorced for sleeping with that enchanting creature." Lord Bligh

In the second episode of a two-part story, disgraced former Malian government minister Naranda (Bari Jonson) flies to Switzerland to collect the money he needs to buy the WilderÆs house, leaving his 18 year old daughter Trina (Louiza Flamma-Sherman) in the WilderÆs care. 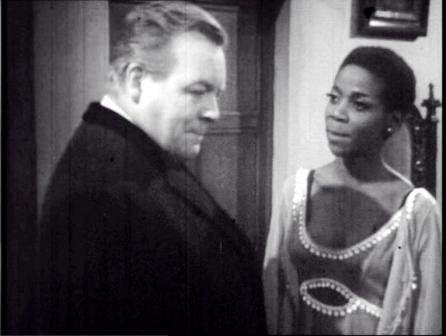 Reinforcing our suspicions that Raymond Bowers was allowed to inflate this woeful story into a double episode as part of some two-for-one deal, Bowers continues the running joke of the local workmen constantly erecting and removing the ōFor Saleö sign at Hackton Hall.It doesn't get any funnier but at least ensures more work for Nicholas Grimshaw and Robin John (Creatures The World Forgot). Who says trickle down capitalism doesn't work?

Jack Watling was underemployed in the previous episode, but Bowers allows Don Henderson to reassert himself in the Foreign Office scenes, sparring with Lincoln Dowling over which of them has WilderÆs best interests at heart. ōDonÆt worry, Rover,ö Dowling tells him, ōBetween us ¢ you in your doggy amateur way and me in my catty professional way ¢ we can make sure nothing goes wrong for our master today.ö

The rivalry between Dowling and Henderson suggests that Bowers had some Shakespearean misrule in the back of his head while writing this episode. In the previous episode, Wilder had instructed Pamela to cultivate BlighÆs private secretary Hindlesham (David Saville) as WilderÆs informant. At the same time, Dowling is also assisting Bligh, so it becomes increasingly difficult to determine who is working for whom.

This episode sees the introduction of Deborah Grant as Jill Tenby, Sir JohnÆs Personal Assistant. Her role appears to be restricted to helping Wilder off with his coat as he enters the office and bringing in a cooked breakfast for Wilder and Henderson

As an odd piece of social history, Wilder is astonished to see Hindlesham in the corridor with his Civil Service issue towel tucked under his arm and asks what heÆs doing. Hindlesham says heÆs going in the bathroom and Wilder pokes his head in before declaring, ōItÆs insanitary in there. A grubby, communal loo!ö 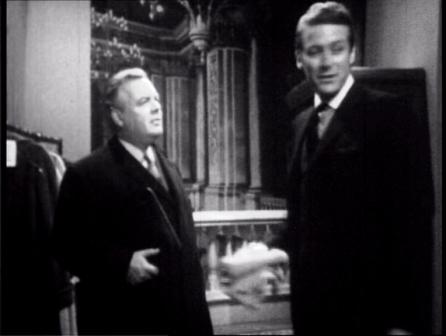 Reminding us that there is a wafer-thin piece of public service negotiation at the heart of the story, Wilder explains to Henderson that the deal heÆs trying to negotiate with Yugoslav minister Kidrich involves trying ōto winkle British capital into a Yugoslav combinat that is openly using Russian technicians. Russians wonÆt like it because it capitalises communism. British hardliners wonÆt like it because it communises capitalism.ö Bligh, who wants to take credit for the deal, tells the Prime Minister that it will mean an increase of Ż15 million in trade.

Much of the previous episode was taken up with Wilder trying to convince Pamela that he'd not been unfaithful with Kidrich's secretary. ōIÆve admitted enough in the past. Why should I lie about this one?ö Wilder demands. Pamela still disbelieves him, despite the torturous scenes in the previous episode centred on a then-state-of-the-art Dictaphone that Wilder had been using to record his draft report. Wilder still thinks the tapes will prove that she pronounces "Dowling" as "Darling" and was shouting for Dowling not calling Wilder "Darling" at the moment Pamela discovered her. If you think that's painful to read, try watching the episode. Tapes go missing. Tapes are placed the wrong way round. Barbara Murray maintains a dignified, heart-broken tremble in her voice, convinced Wilder is playing another long game.

As noted above, Naranda flies to Switzerland for some cash to buy Hackton Hall. He leaves his 18 year old daughter in PamelaÆs care. Wilder learns that Naranda plans to use the Hall as a refuge for his monied-fellow countrymen, brought in under diplomatic visas because they couldnÆt get through the normal immigration controls. Because they will be living in the house Wilder sold to Naranda, ōYouÆll be smeared with conspiracy in the deportation proceedingsö. Realising he could be implicated in a scandal, Wilder puts the Hall back on the market. Receiving a suitcase full of money for the sale of the house would be fine, but the risk of a scandal connected to a highly charged subject like immigration would be too much.

It becomes clear that Bligh had intended for Naranda to bring Wilder down. When he learns that Hackton Hall is back on the market he instructs Dowling to look at sacking Wilder under the Race Relations Act for refusing to sell his house to a minority. It could be argued that the production takes an even-handed approach here - progressive legislation is being exploited both by Naranda to get into Britain and Bligh to attack Wilder. Or it could also be argued that the production is taking a negative view, implying that progressive legislation will always have unintended consequences.

Pamela remains convinced that Wilder has been unfaithful and returns to London, telling him to fulfil their promise to look after NarandaÆs 18 year old daughter Trina (Louiza Flamma-Sherman) . Still under 21 Trina is legally a minor in 1969. But when she changes out of her school uniform into an expensive gown, she seems older. With no staff or cooking facilities Wilder takes the girl out for dinner at the local pub. Despite this being the pre-digital age, word of Wilder dining with a glamorous young girl makes its way to London and by the next morning, Hindlesham tells Dowling that Pamela is suing Wilder for divorce. ōGot it from a solicitor ¢ Charlie Grainger ¢ used to be in the Treasury.ö This refers to the character of Pamela's cousin played by Robin Bailey (So now we know that the ōlarge smelly pigeonö Wilder dumped in GraingerÆs in-box at the end of the last series resulted in Grainger leaving the Treasury and going back to private practice).

Bligh concludes that a prosecution under the Race Relations Act will fail if Wilder is being accused of sleeping with a black girl. Pamela withdraws the divorce proceedings. Naranda returns from Switzerland with his suitcase full of money. And they all lived happily ever after. 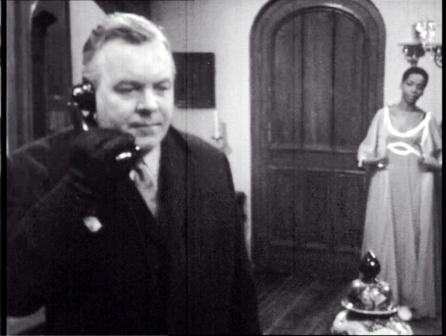 This two-part story displays many of the flaws of the third series of The Power Game. It is inconsistent. Why is Bligh trying to sack Wilder when he specifically recruited him to the role of Special Envoy? It's difficult to see where the story is going. The whole business with Kidrich seems superfluous. For long stretches it is boring. From a 21st Century perspective, the only innteresting angle is the racial one.

The 1968 Race Relations Bill prohibited racial discrimination in employment, commercial services and housing. It was set against a background in which landlords had signs on their doors reading, ōNo blacks, no Irishö. It was also passed weeks after the British Government passed a bill to invalidate the passports of Kenyan Asian refugees. The Race Relations Bill met strong opposition, not least from Conservative MP Enoch Powell who spoke for ōordinary Englishö people who had a ōsense of being a persecuted minority.ö 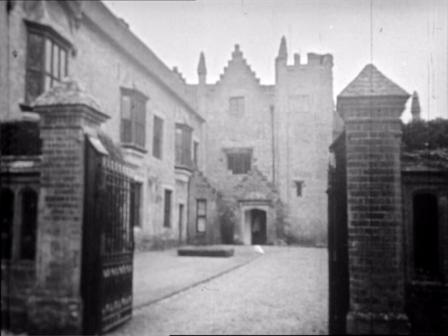 In this episode, the Race Relations Bill is seen as a weapon to be used by the wealthy elite for private malice. As Dominic Sandbrook points out in æWhite Heat:A History of Britain in the Swinging Sixtiesö, racial prejudice has elements of class resentment; ōliberal politicians and commentators usually lived in areas far too expensive for most immigrants whereas poorer working class voters had to compete with them.ö Bowers script arguably includes an element of wish-fulfilment for viewers who felt this way, when Naranda purposely targets the heart of upper middle-class privilege.

ItÆs notable also that while the Commonwealth Immigrants Act of 1962 specifically restricted incomers to those with specific skills or contracts or the dependants of those with residency, the socialist Lord Bligh is shown supporting the rich Naranda's exploitation of a loophole, claiming to be a dependant of his bus driver father.

While the 1960's arts and media are often characterised as being part of a left wing conspiracy, it is notable that this episode depicts a right wing point of view. It's argued by some that the success of legislation such as the Race Relations Bill led to the eradication of casual racism and the gradual repositioning of the threatening "other" on Europe and the EU. Poor as it is, this episode does speak to the Britain of the 21st Century and the Brexit view that the fears of the ordinary disenfranchised Briton are not just ignored but devalued by a patronising, self-serving elite.

Raymond Bowers appears to have pulled off a similar coup with the producers of Yorkshire TV's Hadleigh (1969) selling them two unbelievably tedious episodes (Day of The Miuras and M.Y.O.B) pitting Hadleigh against zealous civil servant Neil McCallum.