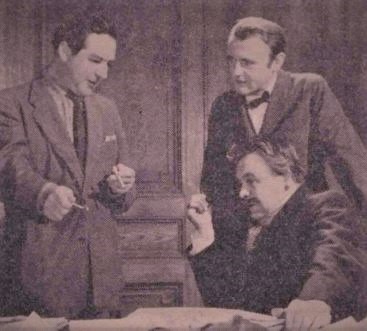 Sir Charles Worgan controls 40 newspapers across the country and sees himself as what would now be called a service provider, giving the public the views they want rather than the truth - conservative in one paper, liberal in another. Bennett based the character on Alfred Harmsworth, Lord Northcliffe founder of the Amalgamated Press, Daily Mail and Daily Mirror. Bennett's 1909 comedy was written at a time when Harmsworth's control of the press was still growing, but when he already had a significant impact on British life.

The play opens with his dramatic critic, Simon Macquoid (Geoffrey Dunn) resigning, not over any great matter of principle but because a split infinitive has been sub-edited into his column. "What is a split infinitive?", Sir Charles asks his visiting brother Francis (Hugh Burden ). In the course of answering Francis finds himself appointed to the newly vacant role of theatre critic. One other foreshadowing of The Plane Makers was the casting of Elizabeth Wallace as his sister, Annie Worgan (she would later play David Corbett's secretary Harriet Evans in the third series of The Plane Makers) .

Despite his material success, Worgan still craves acceptance by Society, and his brother suggests he needs a good wife. Worgan pursues widowed actress Emily Vernon (Dulcie Grey) , a childhood friend and unable to utter conventional endearments, invests in her struggling theatre company in an attempt to woo her. But a scorpion cannot change its nature, and Worgan comes into conflict with theatrical manager Holt St John (Edgar Wreford) who espouses the Reithian ideal of Give The Public What They Ought To Want. Worgan fires St John when he refuses to stage Shakespeare, rather than a stark modern drama.

The play was directed by Peter Cotes, older half-brother of the Boultings, who had been head of drama at Rediffusion for five years. Cotes was fond of the play, having put on a rare stage production in 1949. In a preview article for The Stage, he commented that men like Worgan, "are shy and gauche as lovers because they do not feel the consuming fire which burns away all awkwardness and shame. Such a man is incapable of love...because the forces of his nature...have gone towards the building up of his business." While Sir John Wilder could not be called shy it is up to the viewer to decide how far Sir Charles differs from Wilder.