22 January-28 February 1958 TV serial with Patrick Wymark based on the Old Vic production..

A Black Arrow in each black heart is the motto of the Brotherhood!

Broadcast between 22 January and 28 February 1958, the BBC production of The Black Arrow gave Patrick Wymark one of his first continuing roles as outlaw Will Lawless. Ironically, the 1958 show was actually a remake of the 1951 BBC serial based on the Young Vic production starring Denis Quilley.

The Black Arrow was an 1888 novel by Robert Louis Stevenson. Set in 15th Century Suffolk during the Wars of the Roses, it tells how young Richard Shelton discovers that his father had been murdered by his guardian, Sir Daniel Brackley. Falling in with the Brotherhood of the Black Arrow, a "collection of broken men, thieves, murderers and ruined peasantry,"seeking revenge on Sir Daniel, he rescues heiress Joanna Sedley, whose fortune Sir Daniel desired.

The Black Arrow is not high on the list of Stevenson's novels. Even Stevenson called it "a whole tale of tushery," admitting to playing fast and loose with history (making Gloucester, the future Richard III an adult character when in reality he would have been 8 years old). However, the underlying story, adapted in 1951 by Australian dramatist John Blatchley for the Young Vic company, was considered a rousing adventure. Performed at the Old Vic for a matinee audience during December 1950 and January 1951, The Tatler thought it, "was a romantic flash and flurry, very well acted by the players of the Young Vic." Starring 24 year old Denis Quilley as Richard Hatch and Tarn Bassett as cross-dressing Joanna Sedley, the show was deemed, "A big feather in the cap of the Young Vic. No show by students but a first rate artistic triumph."

The Scotsman agreed that, "The action simply bristles with incident," and commended the actors' "robustness and vigour," while the Daily Herald singled out, John Garley, rich and ripe as the disreputable Will Lawless."

Despite jousting with a wiley film distributors' reissue of the 1948 Louis Hayward movie, the play was a big success. Following critical and commercial acclaim, it's not surprising that the BBC, in the form of producer Naomi Capon, quickly mounted an adaptation screened in two 40 minute installments on Sunday 20 May, and Sunday 27 May 1951. Capon's production used Blatchley's script and the Old Vic cast including Keith Michell as Ellis Duckworth, the vengeful leader of the Brotherhood of the Black Arrow, and Mervyn Blake as the villainous Sir Daniel. John Garley* revived his stage role of Will Lawless, the former monk and sailor who supported Richard in his quest for justice. The serial caught the imagination of a wider family audience but is now lost to time.

In January 1958, Naomi Capon revived The Black Arrow, this time as a six part adaptation, again credited to John Blatchley. 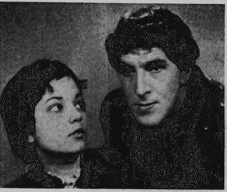 Capon cast established film and TV actor Barry Letts as the villainous Sir Daniel Brackley, stuntman performer Patrick Crean as outlaw leader Ellis Duckworth and newcomers Patrick Blackwell and Anne Dickins in the lead roles. For the character roles she drew upon graduates of the Old Vic. Bennett Hatch, Sir Daniel's grizzled retainer was played by Alan Dobie, who Capon said she had discovered while he was an 18 year old student at the Old Vic Theatre School. Dobie was already making a reputation for asking if he could cut his lines and replace them with a look. "Believing as she does, that a small facial expression can be of the greatest value, she invariably says yes."

Eric Thompson took the anachronistic role of Richard Duke of Gloucester, while Patrick Wymark assumed the mantle of Will Lawless.

"I have been a Grey Friar - I praise Fortune - an archer, a thief and a shipman. Of all these coats I had the best fancy to die in a Grey Friar's."

Since Stevenson portrayed the Brotherhood of the Black Arrow in the vein of Robin Hood, it's easy to describe Lawless, as a "Friar Tuck" type. But Stevenson took a more subtle view of his outlaw band and gave Lawless overtones of Falstaff. Having stolen religious artefacts and run away from his Abbey at age 14, Lawless has roamed Europe and the high seas. "I am a thief by birth and trade and habit. If my bottle were empty and my mouth dry, I would rob you, dear child, as sure as I love and admire your parts and person." Wymark was now established with the Shakespeare Memorial Theatre in roles such as Pompey in Measure for Measure (1956) and was actually playing Stephano in The Tempest at the same time that The Black Arrow was being made. Wymark brought Shakespearean gusto to the rogueish Lawless. Although Ellis Duckworth is the nominal leader of the outlaws, the story has him deputise Richard in his mission against Sir Daniel, so that Lawless and Hatch dominate the second half of the adventure. Although the serial was repeated in January 1959, the tapes are now believed to have been wiped. 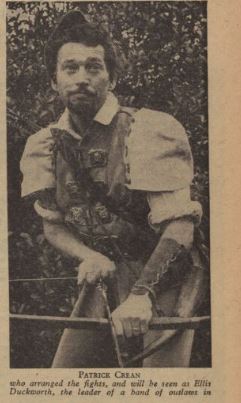 The Black Arrow returned, 14 years later in December 1972 in an ITV serial which ran for three series . The first series starred Robin Langford, who had played Fleance in the Royal Shakespeare Company's 1967 production of Macbeth as Richard Hatch, and Eric Flynn (Dr Syn Alias the Scarecrow and Freewheelers) as Will Lawless. Sir Daniel Brackley was played by William Squire - by then best known as 'Hunter' in Callan but also a contemporary of Patrick Wymark's at the Old Vic. Ben Healey's script took a cue from the first Lone Ranger chapterplay - The Black Arrow was now an actual character a hooded archer and the central mystery of the first series was which character was the real Black Arrow. As if to confound audiences further, Simon Cuff ( Doctor in the House) played a character billed only as "chief outlaw", who could have been Ellis Duckworth. But when the series returned for a second series, cuff was now playing Richard Hatch. While the first series followed Stevenson's novel, the second and third were original stories. The third series invented a new sidekick for The Black Arrow, a former serving boy called Peterkin played by John Sanderson. This ensured the final bit of immortality for the series when Terry Wogan adopted the catchphrase, "To horse, Peterkin." for the 'Wogan's Winner' horse racing slot on his radio show.