20 January 1963 The Sunday Night Play: Freya of the Seven Isles 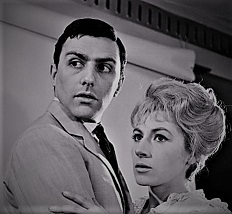 Freya of the Seven Isles was part of BBC 1's The Sunday-Night Play strand, adapted by Leo Lehman from the Joseph Conrad novella. It starred Patrick Wymark as Lt Heemskirk, a Dutch customs officer of "sullen, deeply-pained self importance" whose jealousy provokes tragedy.

Ann Lynn ( the duplicitous Shirley Fawcett in the previous year's A Woman's Privilege) here played Freya Nielsen, the strong-willed daughter of a retired captain settled in the Dutch Indonesian colonies as a tobacco planter. Neville Jason (Inspector Lapointe in the long-running Maigret) played Jasper Allen, captain of the brigantine Bonito and Freya's suitor. Patrick Wymark plays the third side of the triangle, Lt Heemskirk, a gunboat captain who also desires Freya. Conrad quotes Freya's father who fears the Dutch authorities in the Islands, "There were laws and regulations but they had no idea of fair play in applying them."

Colin Jeavons was cast as Joseph Conrad, giving name to the anonymous narrator of the story. The play appears to have been a solid attempt to dramatise Conrad's original, in which Heemskirk circles around Freya enjoying his imagined dominance while Allen weaves a secret affair with her, fitting out his brig like a yacht, preparing for the day when she will marry and sail away with him. Heemskirk schemes with a member of Allen's crew (Tom Watson) to ruin him, symbolically destroying both Allen and the Bonito but indirectly destroys Freya too.

The adaptation was written by Leo Lehmann, and directed by legendary enemy of naturalism James McTaggart.Contemporary reviews were divided with The Birminghaam Post finding that the play "captured the oppressive atmosphere of impending tragedy (but) ended suddenly, the conclusion revealed in conversation rather than action" while The Stage felt the play spent too much time building up the situation and then, "hurried to its conclusion, obtaining little dramatic effect." Patrick Wymark grabbed most of the attention in the role of the bullying gunboat captain.