The Luckiest Thirteen by Brian W.Lavery.

"The word 'prequel' grates with me," says Brian W Lavery, but he acknowledges that this is very much the Zulu Dawn to The Headscarf Revolutionaries, his trailblazing account of the 1968 campaign by Hull trawlermen's wives to change the shipping laws in the wake of three trawler sinkings.

Although published in 2015, Revolutionaries seemed to be the hot fuse of Hull's City of Culture year with its Ibsen-esque heroines inspiring street paintings, stage plays and TV documentaries. The Luckiest Thirteen takes us back even earlier to Christmas 1966 and the story of St Finbarr,a state-of-the-art trawler which erupted into flames in the middle of a fierce storm in Newfoundland waters. The crew numbered twenty-five and the survivors would be the 'luckiest thirteen.' 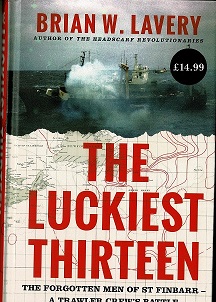 The St Finbarr was a new type of distant water trawler, designed to go further, sail longer, and hold more fish than its rivals. Instead of being back-breakingly gutted on deck, and smothered in ice in an attempt to keep them fresh, fish were deboned and frozen in blocks below decks in a factory process designed to optimise the amount of saleable fish delivered back to port. Powered by fuel-efficient Hawker Siddeley engines and equipped with the latest Rediffusion electronics, the St Finbarr was an ocean-going realisation of Harold Wilson's "White Heat of Technology. But on Christmas Day 1966, the ship was battling against icy swirling gales and a 'confused sea'. The captain had been at the helm more than eighteen hours, holding the ship steady against the shifting waves. Suddenly, smoke and flames burst out of nowhere, driving the exhausted crew back up to the freezing upper deck.

The Luckiest Thirteen tells the story of the crew, the fire and the aftermath. It reminds us of how prose can still be superior to film in capturing brief, confusing, life-or-death situations such as the disorientated stumbling of men roused from sleep by choking smoke. Lavery uses a clear, but constantly-shifting point of view to capture the cruel unpredictable risk of the frost-bitten climb up a rope-ladder to a rescuing ship.

This meticulously researched history moves along with the pace of a novel, recreating a world where the tragedy would go unreported for hours because newspapers and even TV news shut down for the festive period. The book follows the Superintendant of the Mission for Deep Sea Fishermen, and the reporters of the Hull Daily Mail as they begin their separate visits to the relatives.

Brian Lavery depicts a bygone world of "three day millionaires" and the vivid characters who captained the trawlers. Of the St Finbarr captain, Tom Sawyers he writes that, "In often-atrocious weather Sawyers pushed the ship and crew into areas of the Labrador coast, which caused the men to question and even curse him. But time after time the nets came back bursting-full. The crew did not know how to take Sawyers...in one breath, he could be kind, almost avuncular to young deckhands...but in a heartbeat, could flash into Bligh-like rage.". Lavery also recounts the legend of Philip Gay, skipper of the Ross Cleveland, who was confronted by a drunken mutiny when he tried to close the on-board bonded liquor store. After a crewman grabbed the key to "the Bond", Gay left the mess, only to return a few minutes later to lay out the man who had grabbed the key. As the crew moved towards Gay, "they noticed the weapon in his hand. He raised it and pointed it at the crew. It was the gun used to launch flares - and it was loaded."

The fishing skippers were determined men. And after the crew had been ordered to abandon ship, Tom Sawyers, his First Mate Walt Collier and Chief Engineer Hughie Williams elected to stay on board. While the ship was insured, the catch was not, and they gambled that they could keep the ship afloat long enough for it to be towed back into port before the cargo defrosted.

Lavery delivers a satisfying third act with coverage of the Board of Trade inquiry, almost a year after the sinking of the St Finbarr, which tried to establish the cause of the disaster. In the adversarial system, owners, contractors and survivors try to defend their actions while maritime lawyer Dr Lionel Rosen, representing the bereaved families attempts to "harry and bully (them) into accepting some culpability for the loss of some of the twelve lives.". The powerful afterword reminds us that no-one really walks away from a disaster without scars.