“I judge men’s honour by the standards of my own; and I know how much of the commodity I am able to afford . Will you never learn that a straightforward king is a dead king?” King John

John Arden’s Left Handed Liberty was a play commissioned by the Corporation of the City of London to mark the 750 th anniversary of the signing of Magna Carta. It was staged at Bernard Miles’ Mermaid Theatre from 7 to 12 June 1965 in front of invited audiences including the Queen, dignitaries and schoolchildren before being opened to public performances from 14 June 1965.

It has been suggested that when Miles suggested John Arden to write the play, few of the businessmen on the organising committee had heard of him. That is how a committed Marxist, whose most famous work, Serjeant Musgrave’s Dance, challenged colonialism came to write a play about the charter popularly viewed as the pearl around which our freedoms grew. 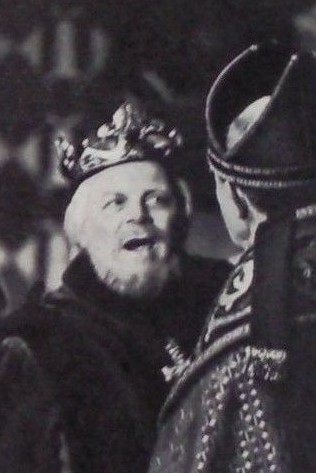 If the Corporation was unaware of Arden’s reputation, the business leaders may have been more aware of the Mermaid’s coup in casting Patrick Wymark as King John. Wymark was now at the height of his TV fame, having won best actor award the previous year for his role as John Wilder in The Plane Makers. This would be Wymark’s first stage role since achieving his TV fame, but while the role of King John would have echoes of the devious Wilder, it would prove as challenging as the work he had done for the 59 Theatre Company.

The Corporation was probably expecting the Ladybird Book view of Magna Carta as the prize wrested from evil King John by the noble Barons. However, when Arden began to research the Magna Carta he discovered the truth was more complex. He later said " It was a surprise for me to discover how soon the agreement between John and the Barons was repudiated. " He thought this was a better theme than the better known story of how King John was forced to sign the charter. The Liberty thought to have been established at Runymede was given with the right hand and quickly taken back with the left. Yet, Arden also decided that King John was a more complicated character than the legends, and that the Barons were equally motivated by self interest. At one point, Arden has Baron De Vesci (Timothy Bateson) argue that clause 39 proclaiming that a free man could only be jailed following a trial by his peers, “was specifically intended to prevent men of my class from being hauled before tribunals consisting of persons of inferior rank.”

Clause 39 of the Magna Carta highlighted on the wall of the entrance to the David PJ Ross Vault in Lincoln Castle, where Lincoln Cathedral’s 1215 Magna Carta and 1217 Charter of the Forest are on permanent display.

The play had a strong cast. Freddie Jones (Frankenstein Must Be Destroyed) played Fitzwalter, the leader of the Barons, " a bull necked fighter, unscrupulous..insensitive". Prolific character actor Timothy Bateson * played his comrade, the neurotic De Vesci and Barbara Mitchell (later to play Frankie Abbott’s mother in Please Sir) was Da Vesci’s challenging wife, accused of having an affair with the King. Eric Richard, who would later play Sergeant Cryer in The Bill was also in the cast along with future comedienne Denise Coffey. Robert Gillespie, who would star in the 1980's comedy Keep It In The Family) and later appear in Mike Leigh's Peterloo (2018) played one of the Barons and also stood in as King John on seven occasions when Patrick Wymark had filming commitments. (Read about Robert Gillespie's autobiography here.) Founder of the Mermaid, Bernard Miles played the Lord Mayor of London (Arden apologised in the text for not making him a more dynamic figure).

Isabelle, John's Queen was played by Jennifer Clulow, a Grimsby-born actress who would later appear in the 1968 series of The Troubleshooters as Miss Clarkson and became a familiar face in the 1980's as the English Rose in the Cointreau adverts being seduced by Frenchman Christien Toma's recitation of the ingredients on the liqueur's label.

Philip Hope-Wallace in The Guardian said that the play, directed by David William was, "beautifully, arrestingly written with a thesis which turns two points quite perfectly with real dramatic irony. First that the vilified monarch John was no monster but an all too human weakling. Second that the simplest view of history – that the charter was a milestone and an enduring shield – is mere fairy tale. " 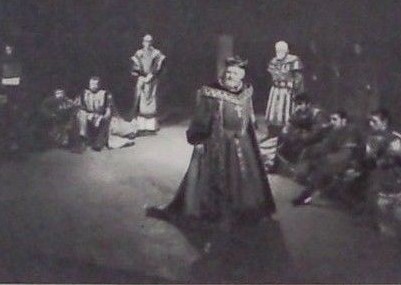 During act three, scene seven, King John "breaks the fourth wall", saying there is a time in any play when the persons upon the stage must justify their existence. He directly addresses the audience telling them to make up their own minds about what they have seen. He quotes from Dr William Sharp McKechnie, author of the great commentary on Magna Carta analysing the intent behind one of the clauses. Later he tells the audience, “I am not going to even try to read you what (Magna Carta) says about the Jews, let alone attempt to argue for it. Those of you who may be of that faith and nation would hardly have done worse under Adolph Hitler than the pioneers of liberty who set their hand to this!”

Arden, who disliked telling the audience what to think, later said that if the play had any message it was that, "an agreement on paper is worth nothing to anybody unless it has taken place in their minds as well and that if we want to have liberty we have to make quite sure that (a) We know what sort of liberty we are fighting for: (b) Our methods of fighting are not such as to render that liberty invalid before we attain it and (c) We understand that we are more in danger once we have attained it than if we never had it. "

Whereas many notable plays had been adapted for TV, after its run at the Mermaid, Left Handed Liberty had to wait a year before it was performed a radio broadcast on the Third Programme on 18 November 1966 with John Slater (Sergeant Stone in Z Cars) as King John.

During the 2016 Magna Carta celebrations, Andrew Dickson made a 45 minute documentary about Left Handed Liberty for Radio Three which you can listen again to here . You can read a background article here.

*Timothy Bateson played Lucky in the first British production of Waiting for Godot. He was the first caretaker in Grange Hill, the fairground barker in Torture Garden. He was literally one of those actors who was in everything. Check him out in "Man From the Dead", the first episode of "Man In A Suitcase" as Pfeiffer, a private detective employed by Richard Bradford to do his legwork. Every one of their scenes together are so entertaining. What a pity they didn’t keep Pfeiffer in the rest of the series.