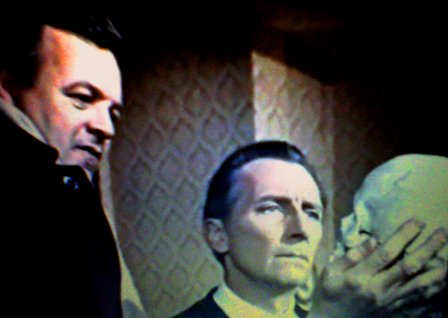 Playing Anthony Marco, Wymark moves up to second billing between Peter Cushing and guest star Christopher Lee. At this point in his career, Wymark had won a Royal Television Society award for his role of John Wilder in The Plane Makers , and was on the verge of taking Wilder forward into the first series of The Power Game. For an actor who relished change, the disreputable Marco must have seemed a welcome change of pace.

Writer Robert Bloch transformed Jack the Ripper into an “ageless pathological monster” , killing to top-up his charge of immortality,  in his 1943 tale, “Yours Truly,  Jack The Ripper”. So it should come as no surprise that in the 1945 Weird Tales story, “The Skull of the Marquis De Sade”, Bloch transformed the abusive, aristocratic pornographer, into an equally satanic menace.

Robert Bloch's reputation got a sensational boost from Alfred Hitchcock’s film of his novel Psycho. But it was more than name value that attracted film-makers Amicus to his work in 1964. Bloch’s short story provides the core of the movie and Subotsky's script expands the action in a manner that complements the original.The film would have been even more faithful if the UK film censor had not red-pencilled a torture sequence which was a direct reproduction of the 1943 short story (instead of being flogged, Peter Cushing’s lead character is forced to play Russian Roulette in the finished movie). 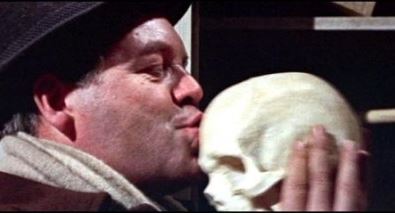 Bloch’s story is based on the historic fact that (rather like Oliver Cromwell) his skull was exhumed from his grave. Unlike Cromwell, De Sade's skull disappeared.  Bloch theorises that the Skull has been passed from hand to hand by private collectors like some cursed gem.

There is an entertaining controversy around the success of the movie. Director Freddie Francis alleged that producer Milton Subotsky’s script came up 40 minutes short,   implying that the script was incomplete and Francis had to make up the running time with improvised and extended silent sequences. Subotsky hit back, claiming that he had to put together the climax in the editing suite using bits and pieces of film that had been shot for other purposes. A a copy of the screenplay unearthed by Peter Cushing blog, suggests that Subotsky delivered a complete script, albeit one in which the dream sequences would have been considerably shorter if filmed in the way described on the page. Whatever the genesis, The Skull, more than most horror movies, relies on the creation of mood and unsettling imaginative sequences.

In the movie, Peter Cushing plays  Maitland, a collector of occult memorabilia. Patrick Wymark plays Marco, a dealer in antiquities who has supplied Cushing's Christopher Maitland with occult items such as "a hand of glory stolen from a graveyard in Mainz" and who brings Cushing' a history of the Marquis De Sade bound in human skin.   At first glance, Marco might seem to be a down-on-his-luck version of Wylie from The League of Gentlemen. However, this character has more undertones than the “wide boy” of the earlier film. A chameleon, Marco’s voice becomes rich and cultured as he relates the provenance of the Skull of the Marquis De Sade, but echoes the working class tones of Peter Woodthorpe’s prying caretaker when he assures him that the occult items in his own flat are “worth nothing at all.” Maitland’s wife (Jill Bennett) dislikes Marco and is reluctant to let him enter the house (in Bloch’s story it is Maitland’s butler who refers to Marco with an, “almost grotesque expression of distaste). In the original story, Bloch describes Marco as “fat, greasily so; his flesh lumped like the tallow coagulating about the stump of a guttering candle.” Wymark characterises the indulgent Marco in the opening auction sequence with a little bit of business with some snuff – a small touch which allows him to hold attention between terror titans Peter Cushing and Christopher Lee.

There’s an interesting bit of juxtaposition illustrating Marco’s trajectory – early on, brimming with confidence and facing forward he kisses the Skull that he thinks he’s going to sell to Maitland. Later on, after he’s admitted being un-nerved by the Skull, he finds it missing from its hiding place and turns behind him to come face-to-face with the Skull (held by Woodthorpe). Whether scripted or improvised, it’s an example of the detail which makes the Skull more than just a by-the-numbers thriller.

Nate Yapp, on Classic-Horror.Com comments that, "Only Marco feels like he has any dimension. Although we get a sense of his scumminess early on (his snuff-stained nostrils and the smirking way he talks his way into Maitland's study), we also see, during Marco's conversations with Maitland, that the man really does have an appreciation of the antiques he fences. One sometimes despairs at the dearth of well-rounded characters in horror, so I appreciate it when someone like Marco comes along." 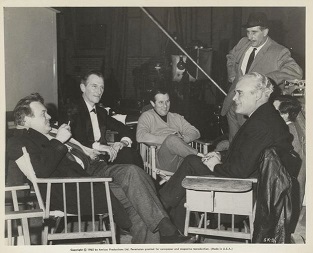 Patrick Magee, who had played Warder Barrows in The Criminal (1960) and deputy works manager Breen in two episodes of The Plane Makers contributes a brief appearance as a police surgeon. Ironically, Magee was playing the Marquis deSade on stage for the Royal Shakespeare Company at the time in Peter Weiss's Persecution and Assassination of Marat as performed by the inmates of the Asylum of Charenton under the direction of the Marquis de Sade The cast also includes Nigel Green in the role of Inspector Williams. Green (who had also appeared in The Criminal and who would play a security officer in The Power Game in 1966) and Magee do not actually share any action with Wymark, although a behind-the-scenes still (above) suggests that Wymark's final scenes were shot on the same day.

When Marco is trying to win Maitland over, the script refers to Marco’s voice as “soft and sensuous” and Wymark’s performance here is one of patient entrapment. In arguing with the censor, Subotsky stated that the,“purpose of this scene is to show Maitland’s unconscious desires…which he does not admit to himself, but which Marco understands.” (see Little Shoppe of Horrors #20 The Uncensored History of Amicus Productions page 42). Marco soon breaks Maitland down to what Bloch called, “ a collector, stripped of all pretences, quivering eagerness incarnate.”

Wymark’s part does not have a great deal of running time, but it is pivotal. If each possessor of The Skull is possessed by the Marquis De Sade, it is not clear if Marco’s silkiness is characteristic or due to the aristocratic influence of The Skull. Capitalising on his TV fame from The Plane Makers,  Wymark is third-billed here, and his next collaboration with Amicus and Francis would be a starring role.