AFTER The Power Game

In the wake of The Plane Makers and The Power Game, a number of series followed which echoed the themes of the series. Some came from parts of the original creative team, others were fresh initiatives.

30 April 1966 The Troubleshooters (BBC Televison). This was the rebranded second series of Mogul. In a cost-cutting move,Foster and Hines were replaced by Robert Hardy as Alec Stewart, who survived until the 1968 series. Producer Peter Graham Scott (from September 1966, Anthony Read). Script Editor and Creator John Elliott. Starring Geoffrey Keen as Brian Stead, managing director of the Mogul Oil Company. Ray Barrett as Peter Thornton and Robert Hardy as Alec Stewart. For more on The Troubleshooters there is a dedicated site at this link

The "Missing Link" between series two and three of The Power Game, this one-off play by Wilfred Greatorex is directed by David Reid, who would go on to produce the third series. For a full Review click here

10 March 1972 The Brothers (BBC Television). This series aboout a family haulage company ran for seven years. Created by N.J.Crisp and produced by BBC stalwart Gerard Glaister. Margaret Ashcroft, from The Main Chance joined the cast from September 1974 and Kate O'Mara from May 1975.

21 July 1972 The Man From Haven (Associated Televison). Creator Wilfred Greatorex. Starring Ian Holm as Jack Byron Leaver, who uses his contacts within a Swiss bank to blackmail the holders of anonymous accounts (6 episodes).

8 January 1976 When The Boat Comes In (BBC Televison). Although set in Tyneside after the first world war, this BBC series created by James Mitchell presents a lead character who matches John Wilder in spirit. See more here . 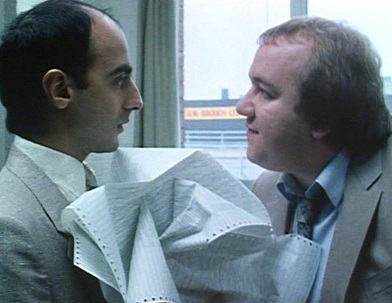 12 January 1982 Muck and Brass (Central Television). Starring Mel Smith and Darien Angadi this was literally the last ATV drama production, although it went out under their new and diminished guise of Central TV. Tom Clarke's script exposes the workings of the property industry and local government as incisively as The Power Game. For more about Muck and Brassgo to this article