ďYou can almost feel their breath on the back of your neck already.Ē John Wilder. 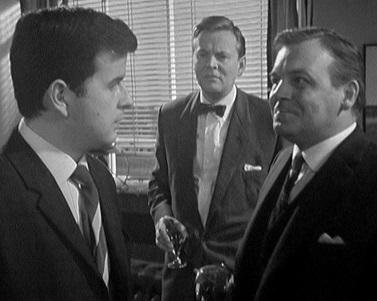 After the boardroom farce of ďThe Old Boy NetworkĒ the series dives towards shop floor comedy with Peter Draper's first script for the series. Draper had worked in an advertising agency so there may be some background knowledge in the circumstances in which Rodney Bewes'public relations clerk is dumped with the job of filling the seats on the Sovereignís first long distance trial flight. Passengers are needed to provide weight and itís a tradition that factory staff are used. This flight is going to the South of France, so as Don Henderson (Jack Watling) says, whoever gets the job of allocating the seats is , ďextremely popular one minute and loathed by everyone the next.Ē

Once again, Henderson plays an extremely small part in the proceedings as he immediately delegates the job to ďthat little twerp in public relations who thinks he's going to take over my job one dayĒ. Henderson's briefing to Fletley (Peter Myers) is condescending and probably not best practice, but it is instructional to hear Fletley parroting Hendersonís witticisms when he in turn dumps the job on Rodney Bewes as Ormiston. It illustrates just how differently two actors can deliver the same words (producer Rex Firkin recalled in ďHigh Drama Ė My Life In TelevisionĒ that as an actor he had seen Watling being ďdelightful and funnyĒ in The Winslow Boy and was thrilled to play the same part. It was only when he read the script that he realised, ďit wasnít funny at all. It was Jackís skill that had made it funny.Ē) To be fair to Peter Myers, he is placed at the disadvantage of repeating lines the viewer has already heard, and the whole point of the scene is to underline Fletley's lack of imagination. When asked for reasons behind the decision making by Ormiston, he can only reply, "Channels, you know," and when Ormiston later goes to confront Wilder directly, Ormiston can only chide him with the reminder that, "there are channels, you know!" 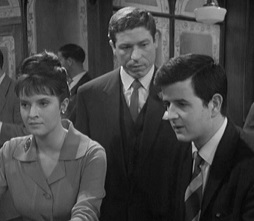 Draper's script covers a range of workers vying for the free flight including guest actor Victor Maddern as Hammy, a wide-boy electrician. But the heart of the episode is Bewes' tentative romance with secretary Isobel Black. Bewes tells her, ďAll Iíve got is a television set and a copy of the Kama Sutra. I canít promise to love you as long as I live, but Iíll love you very much as long as I can.Ē The romance is threatened by slimey manager John Woodvine, who intends to ensure both he and Black will be sharing the flight to France. Victor Maddern's electrician uses Wilder-style devious tactics to get a seat on the test flight. It's not clear at first how he plans to earn a ticket by manipulating other staff into organising a talent contest, or by deceiving Barbara Windsor (coming off the final series of The Rag Trade). Here she plays a paint shop sprayer whose true vocation is as an exotic dancer (Barbara has special billing in the episode, and there is a Joan Littlewood in-joke when Maddern tells her that he will bring paper and comb to her audition and play Fings Aint What They Used T'Be.) 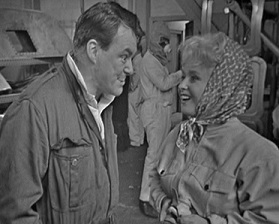 Like Henderson, John Wilder has very little screen time in this episode. When he does appear in the story it serves to create some final act conflict. Wilder decides to use the flight as a publicity exercise and fill it with journalists. Bewes is told to cancel the lottery, but screws up his courage and confronts Wilder in his office. Bewes says cancelling the traditional workers flight is a bad decision. ďIt may not be bad for the economics of the firm, but I think it may very well be bad for the morale of the firm. And that in the end has a bearing on managementĒ (Jack Watling in the background chokes on his drink at the coming storm)

Wilder promises to think about it and when theyíre alone asks Henderson how old the PR man is. Henderson tells him heís 22. ďYou can almost feel their breath on the back of your neck already, ď Wilder says, with the benign rider,, ďKeep an eye on him.Ē

Rodney Bewes was a year away from his defining role in the BBC comedy The Likely Lads but brings the same earnestness to the role of Tim Ormiston. Isobel Black (Tania in 1963's Kiss of the Vampire) displays a matching sensitivity. She would be teamed again with Rodney Bewes in the 1966 Likely Lads episode Brief Encounter and go on to appear as public relations assistant Eileen O'Rourke in the 1967/68 series of The Troubleshooters. Old Vic actor John Woodvine (An American Werewolf in London) makes a nicely despicable threat to their relationship. Victor Maddern ( Carl in Blood of the Vampire 1958)) gives a nice broad performance as the scheming Hammy. Victor Maddern would have been familiar to any American viewers as the father of Dennis Waterman and Judy Carne in Fair Exchange (1962-1963), a CBS sitcom partly set in London but filmed at Desilu studios in which he and Eddie Foy Junior swap their daughters (Lynne (Doppelganger) Loring played Foy's daughter.

Last but not least of the guest actors, Barbara Windsor plays artistic dancer Marlene. Windsor was well-known for a similar role as seamstress Gloria in the BBC comedyThe Rag Trade and would go on to star in Carry On Spying the following year. Although slow on the uptake, Draper at least writes the character with enough shrewdness to see through Maddern's storytelling. When she does perform her exotic dance, she does it to the off-key singing of the Manchester Children's Choir classic Nymphs and Shepherds. In the same charmed manner as her Carry On film characters, Marlene eventually obtains a seat on the Sovereign flight despite the partial collapse of Maddern's scheme. As noted above, Maddern makes a reference to Fings Aint What They Used T'Be during one scene. Barbara Windsor had appeared in the West End production of this show in 1960 and starred in the 1963 film version of Sparrows Can't Sing*.

*Power Game actor George Sewell played Windsor's boyfriend in Sparrows Can't Sing.The part of her characters husband, played by James Booth in the film, had been originated in the Stratford East play by John Junkin, who played union convenor 'Dusty' Rhodes in four episodes of The Plane Makers. Several of the cast of Joan Littlewood's current hit, Oh What A Lovely War would appear in the subsequent episode Costigan's Rocket

Itís hard to guess how audiences would have responded to this episode. With ďThe Plane MakersĒ making the transition from anthology series to continuing drama, this is very much like an first series episode with more emphasis on the shop floor characters.Draper's characterisation, and the performances are engaging and it seems to have been standard to include at least one ďfunnyĒ episode as a ďchange of paceĒ . Viewed from the 21st century on a DVD boxset, it may be irritating to have the continuing story of Wilder and the board room battles sidelined. At the time though, it may well have satisfied those viewers who did not enjoy the running boardroom saga of Wilder.