Empires Have to Start Somewhere Written by Edmund Ward, Directed by Peter Collinson 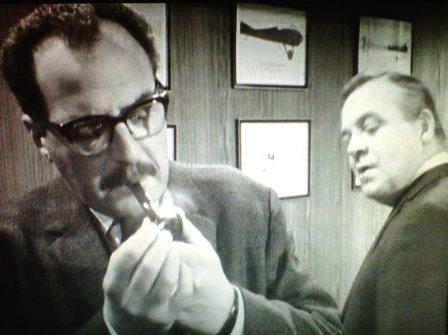 A new title sequence heralds a new direction for the Plane Makers, as technicians and pressure-suited test pilots stride out of the hangar towards a new Vertical Take Off and Landing jet which shoots up into the sky like something out of science fiction.

Discussing sales of the Sovereign, Wilder tells Don Henderson, "We broke even three months ago - with orders still to come. Now we take the profit - just sit back for two years of gravy."

"No Don,” Wilder replies, “You can't stand still. Not in this business."

The Vertical Take Off and Landing Jet shown in the title sequence is the brain child of David Corbett (Alan Dobie). Ryan Airframes is part of the same group as Scott Furlong. Bill Ryan (John Wentworth) and Corbett are passionate about the VTOL (pronounced Veetol) project, but their main income is sub-contracting work for Scott Furlong. Their Works Manager, Bob Fraser (Duncan Bannatyne) is a former Scott Furlong employee, acutely aware that they’re missing deadlines for delivery of Sovereign tail assemblies. John Wentworth as Ryan is very different from Telliter, the fey financial advisor to Pamela Wilder he played in the previous series episode “Loved He Not Honours More”. Ryan is the human side of the partnership, commanding the loyalty of staff and spending hours negotiating with the “bone-headed civil servants” Corbett cannot abide. 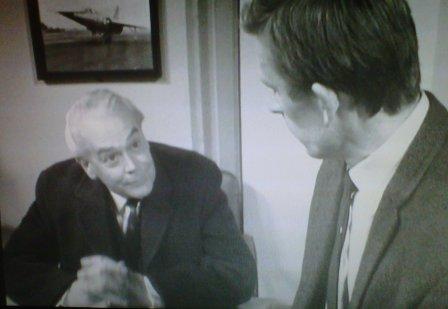 At Elberdson’s bank, Sir Gordon Revidge, Sir Gerald Merle and accountant Atkinson (John Cater) are discussing an appeal Ryan and Corbett have made for a further eight million pounds investment to develop the VTOL. Revidge and Atkinson are sceptical about putting more money into the project, Coincidentally, Wilder arrives to put his plan in motion by telling them he intends to invoke the penalty clause on Ryan Airframes which is consistently late with the tail assembly for the Sovereign. He then reveals that Bill Ryan is in ill-health – he’s been pushing himself too hard and could be dead within a year, with all his vital knowledge and contacts locked in his head. The company doctor had held Ryan out as a warning to Wilder. 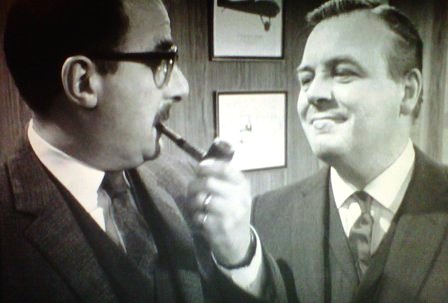 Revidge forces Ryan out, offering him a golden handshake spread over five years for tax purposes. Ryan tells Corbett the only chance of defying Revidge is for Corbett to threaten to take his technical expertise away. Corbett considers it for a second and then says, “I’ve spent six years working on this. I can’t throw it away for loyalty, politics, anything. I can’t. It’s too important. I’m sorry. I can’t compromise continuity of work with wilful personal interference.”

This tongue-twister of a speech really defines Corbett, described by Henderson as, "Very technical. Drinks lemonade. Not really my type."

Corbett is single-minded, apparently lacking in social or political graces. Whether by accident or design, the gaunt, pale Corbett is visually reminiscent of Raymond Massey’s technocrat Cabal in “Things To Come”. Alan Dobie had been a student with Patrick Wymark at the Old Vic Theatre School, and a year before had played the Revenue Solicitor persecuting Wymark's Joseph Ransley in Alias The Scarecrow.

This time Wymark is in control as he finally comes face to face with Corbett. The share price of Ryan Airframes has plummeted with the news of Bill Ryan’s departure. Wilder has offered to save the company by sharing facilities and cutting the cost of the investment Corbett needs to develop the VTOL. Revidge has agreed to make Wilder managing director of both Scott Furlong and Ryan Airframes, if he can get Corbett to agree to work with him. 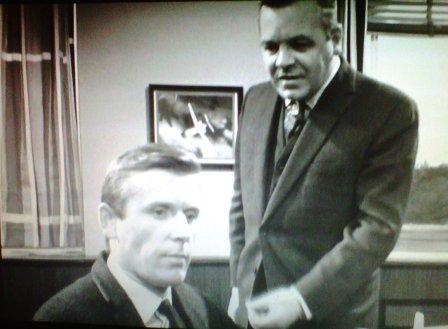 When Corbett asks why he should work under Wilder, he is told, “It’s either me or the Revidge’s and Merle’s. Their idea of achievement is a balance sheet without a blot on it…I take risks!” Wilder tells him that Atkinson has leaked the new that Wilder has been made Managing Director of Ryan Airframes and asks Kay Lingard to check Ryan’s share price. She tells him it’s stopped falling and has gone up by four shillings a share. Corbett confirms that he will have technical independence and agrees to work under Wilder. “A man can be anything he chooses – after that it’s just a matter of concentration.”

This is a well-paced opening episode, introducing new concepts and new characters and also telling the story of Wilder’s take-over of Ryan Airframes in less than an hour. The episode is anchored with the familiar antagonism of Norman Tyrrell as Sir Gordon Revidge and William Devlin as Sir Gerald Merle. The formal boardroom scenes (and extra characters) are abandoned in favour of a “quorum” of directors in Sir Gordon’s office at Elberdson’s Merchant Bank. Don Henderson is finally made a member of the Scott Furlong Board in this episode, as part of Wilder’s deal with Revidge.

Reginald Marsh returned as Arthur Sugden after starring the previous night as Albert Tufton the leader of miners striking to get new pumps installed in their pit, in “Undercurrent”, Rediffusion’s “Play of the Week”.

John Wentworth would play Henry Castleton, solicitor David Main's Leed-based partner in Edmund Ward's 1969 series "The Main Chance". This would also feature John Arnatt (who had been the sales manager Peter Humphries in "Too Much To Lose") as former detective Sidney Bulmer.