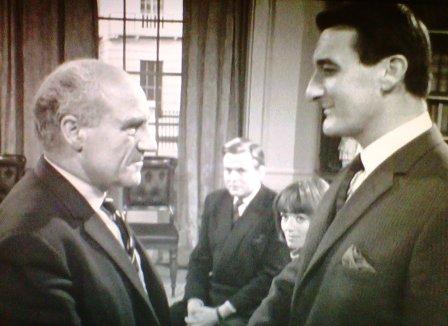 “Whenever I encounter a one-way street in France, halfway down I hesitate. I so often find myself the only driver obeying the sign.” Sir Gerald Merle.

French intelligence intercept a spy with film of Corbett’s Veetol and make their own copy before returning the film to the British. Camille Tonelier (Robert Macleod), Minister of the newly constituted Bureau for the Integration of Expenditure, shows the film to Evrais (Henry McCarthy) whose firm is developing the French VTOL. Evrais agrees that the two planes are similar but Tonelier has a radical solution..

Both Britain and France are developing VTOL fighters. NATO will buy only one. If they have to choose between two aircraft, NATO will delay and this will give the Americans time to present their VTOL ("and being newer, it will seem better"). Tonelier arranges a meeting with several British back-bench MP's with aviation expertise including Merle and Grant. He wants to make an unofficial approach to the British Government via the back-benchers. Sir Gerald Merle is appalled that he wants them to lobby their own Government. Sir Samuel Hesterby (played by Carleton Hobbes, the former radio Sherlock Holmes) grasps that previous inter-Government proposals have been derailed for short-term advantage. “Ransacked by the press and pillaged by the opposition,” Tonelier wants them to “consider something as a matter of national, not electoral importance and to do the same when the matter is formally presented.”

Tonelier offers to share -without strings- the details of Evray Aviation’s VTOL (Evray reluctantly handing out personally assigned copies of the specifiction). Tonelier proposes that the French and the British should agree which plane is better. Only one will go forward to production, but the other nation will then have no competition in developing NATO troop carriers. Hesterby jokes that, if they can agree on this, “there’ll be no need to go into the Common Market”.

When Sir Gordon Revidge learns of the French offer through a press leak, he is eager for David Corbett to examine the French specification as soon as Sir Gerald Merle can hand it over. But Sir Gerald piously reveals that he refused to accept a copy of the report because it would be a conflict of interest with his commercial responsibilities as a director of Scott Furlong. Revidge angrily criticises Merle for not thinking of his duty to the bank. 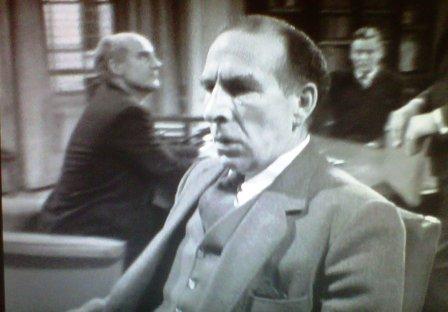 Sir Gerald Merle (William Devlin) hears something he doesn't like

Sir Gordon is very much in the driving seat in this episode. It would be interesting to know if the script was originally intended for Wilder, annd later rewritten when Patrick Wymark was unavailable (Wilder is said to be travelling around Europe's capitals, staying out of touch but phoning Don Henderson on a daily basis). Revidge explains his attitude towards the VTOL: he believes there is no future in military contracts. He wants Scott Furlong to continue making commercial aircraft (preferably with Sir Gerald Merle as Managing Director) but if the Government insists on giving out money to develope the VTOL, he would prefer the money to go to Ryan Airframes. (James Cameron-Grant later decodes this as, “Revidge is fighting Wilder to remain top dog. He finds Wilder uncontrollable, so Wilder must go.” A development contract for the VTOL at Scott Furlong would be a success for Wilder making him difficult to remove. But if the contract can be delayed long enough, Wilder can be removed )

Both Revidge and Wilder are aware that Grant has a copy of the French specification but Grant is playing his own strategy against Wilder, Revidge and his political rival Sir Gerald. Grant is two steps ahead of everyone else. He is aware that Wilder plans to end his PR contract with Scott Furlong (because Wilder “Can’t stand anyone working the same way he does”, referring to Grant’s high risk tactics in “Other People Own Our Jungles Now”). Grant negotiates an extension of his contract with Wilder via Henderson. At the same time he forces Revidge to commit to an offer of seats on the boards of both Scott Furlong and Ryan Airframes.

Bowers delivers a neatly flirtatious scene between Peter Jeffrey and Wendy Gifford. We see Laura Challis checking some partidges cooking in the rotary grill of a “wood façade oven”. Grant enters the apartment and finds that Laura’s key is stuck in the lock. He tells he”I’ll get you another one cut” and notices that she’s having problems with a bottle opener, “Why don’t you get one of those that do it for you?” she asks, confirming that this is Grant’s apartment and she is familiar but not resident. Grant hands her a perfume box saying Tenelier brought presents for everyone’s wife. “You’re a widower” she points out, but Grant replies, “As a Frenchman he felt that was no circumscription.”

References to the recent election suggest that this episode was written or made before the result was known. Sir Gordon Revidge tells Sir Gerald Merle that, “Before the election you expected – win or lose- that your party would promote you to its front bench – it hasn’t !”. And at a meeting in Paris, Tonelier congratulates a number of back-bench MP’s with aviation expertise (including Merle and James Cameron-Grant) on surviving the election.

We also learn from Tonellier that Cameron-Grant is a DFC (Distinguished Flying Cross) and therefore has practical experience of aviation.

Director James Ferman has several loving close-ups of William Devlin as Sir Gerald Merle doing slow burns in this episode – such as when Grant reveals that Wilder has offered him a directorship of Scott Furlong, and then when Sir Gordon replies that it is more likely someone less adventurous, “some seat warmer” will be chairing the company.

Jack Watling is nicely flustered as Henderson, being caught out by both Revidge and Cameron-Grant over whether he does or doesn’t know Wilder’s whereabouts. Revidge tries to make Wilder distrust Henderson by ensuring Don is present when he negotiates with Grant. He also tempts Henderson (made a director of Scott Furlong as part of Wilder’s deal in the first episode) to join the Ryan Airframes board saying that Wilder eventually gets rid of “Wilder men”. He says, “Eventually, Wilder feels under some compulsion to return their loyalty – at such moments he ceases to feel like Wilder – and he gets rid of them. Being on the board of Scott Furlong never helped any of them.”