David Corbett (Alan Dobie) is learning to play the game

“Why does power turn men into little boys?” Henry Forbes

When the Ministry of Defence expresses concern about temperature control in the VTOL cockpit, Wilder sends Henry Forbes and the VTOL out to Tripoli for low-level flight tests. Corbett only learns about the tests after the VTOL has returned to England, and Wilder orders Don to ensure that Forbes’ report is sent to the MOD without Corbett seeing it..

After two episodes’ absence, Patrick Wymark returns as Wilder to play his “island game”, isolating Corbett from the information flow in an attempt to control the bid for Government funding. As Corbett fights back, Henry Forbes observes that he hardly looks stranded. Indeed it’s Wilder that’s beginning to look ragged. At one point, when Corbett has ignored his calls to the phone, Wilder tracks him down to one of the aircraft hangars. When Wilder accuses Corbett of wasting time, Corbett replies, “You’re the one who’s been driving around all morning trying to find me.”

Wilder also attempts to neutralise Bourne (Laurence Hardy), an obstructive civil servant, “The nit-picker in chief”. Typically, Wilder sees Bourne’s behaviour as self-interested, telling Don that Civil Servants thrive on stalemate. Caution is the same for them as a big sale would be for Henderson.

“He knows that we’ve probably got a world-beater in the VTOL. He knows how much I want that production contract. By holding things up just enough he draws attention to himself.”

Wilder tells Henderson, “I want Bourne bought over, won over, or discredited” and finally makes a crude attempt to buy Bourne off with an offer of a job at Elbertsons Merchant Bank. “I’m all for creaming off top civil servants into industry.” 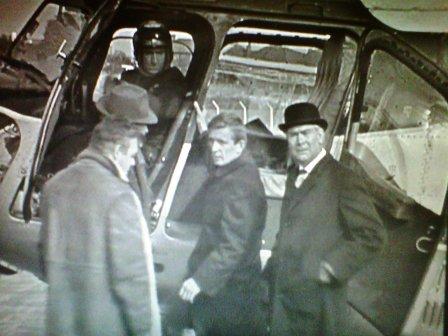 The conflict between Wilder and Corbett becomes farcical. Wilder arranges a meeting with Bourne and his military adviser without telling Corbett. As they head for the Whitehall meeting room, Wilder briefs Henderson not to look surprised when he gives an excuse for Corbett’s absence at the meeting, only to open the door and find Corbett sitting in the meeting room. Later, Wilder has arranged for the Minister to see the VTOL flying without Corbett’s knowledge. As an RAF transport helicopter lands at Radley Heath, Wilder goes to greet Bourne and the Minister (John Harvey), only for Corbett to step out of the helicopter. 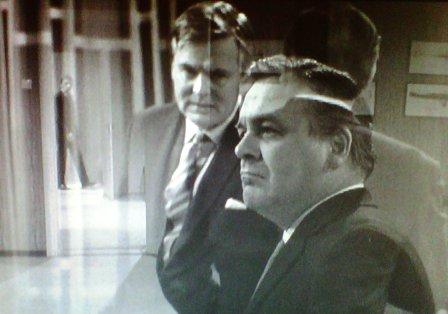 Late at night, Wilder leaves the office doors open and summons Corbett to a confrontation, but the news that the production contract has been won postpones the showdown.

Another sub-plot is brought into play when Don Henderson remarks to Wilder that he’s pushing himself too hard in the conflict with Corbett. Wilder looks older in this scene – his hair grey at the sides – although it’s hard to tell if this is make-up or a consequence of the studio lighting and quality of telecine reproduction in this scene. Henderson says, “Corbett’s young enough to take this kind of stress. It’s beginning to show John”

Wilder insists that, “I’m not losing weight – and I sleep very well – I’ve taken nothing stronger than an asparin for months!”. But after winning the production contract, he declines to join Don in the pub for a celebration. As the end titles begin, Wilder takes a bottle of pills from his pocket and knocks one back. We recall that in “Empires Have To Start Somewhere”, Wilder said the company doctor had given Bill Ryan as an example of what can happen when you push yourself too far.