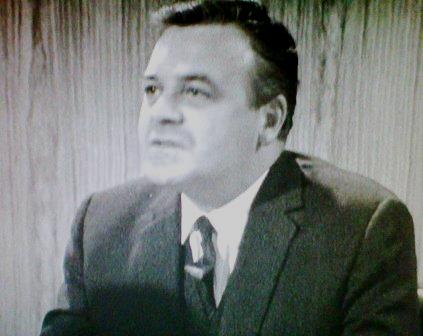 “Nobody joins me conditionally. You join me in ignorance or not at all.” John Wilder

Wilder organises a demonstration of the VTOL for representatives of the German Air Force. Although it is 20 years since the end of World War Two, the arming of the Luftwaffe is still a sensitive subject. No-one is sure what Wilder is up to, but his enemies see a potential chance to remove him.In “The Golden Silence”, Sir Gordon Revidge offered directorships in Scott Furlong and Ryan Airframes to Cameron-Grant. Now the MP must decide which seat will further his political career. .

An intriguing script by Raymond Bowers with its roots firmly in the politics of 1964. It’s worth reminding ourselves that Wilder’s visitors are from the “Western” half of a divided Germany. The Federal Republic of Germany was a member of the capitalist North Atlantic Treaty Organisation, while the German Democratic Republic was part of the communist Warsaw Pact. Following the disarming of German forces at the end of World War Two, the West German Luftwaffe was established in 1956 when the FDR joined NATO.

As Don Henderson (Jack Watling) tells Laura Challis (Wendy Gifford) people are often trying to tempt him away from Wilder with all kinds of plans. The thing about Wilder is that no-one ever knows what he’s planning until he’s done it.

This episode opens with Henderson and David Corbett (Alan Dobie) both looking out of their office windows to discover the supposedly absent Wilder on the tarmac preparing the VTOL for an unannounced delegation.

While they speculate over Wilder’s actions, Bowers has them bring us up to date as Laura Challis asks on behalf of Sir Gordon Revidge and the bank, if Don has had any luck selling the VTOL to NATO countries. Don tells her that NATO is waiting to see what the French VTOL (introduced in “The Golden Silence”) looks like. Corbett jumps in to remind them that if the Government had delayed VTOL production by six months, “I’d have turned out a better aircraft.” 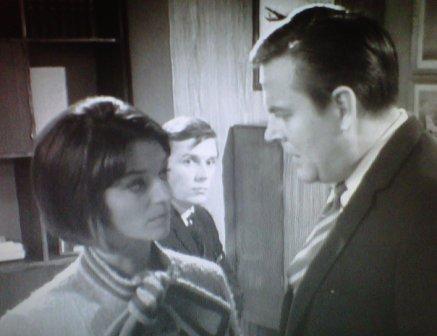 Laura Challis says the merchant bank has two concerns. Now that the Government is funding the VTOL, the bank can use the money put aide for the VTOL elsewhere. Sir Gordon thinks the bank could invest in production facilities at Ryan Airframes. If NATO buys the VTOL, Corbett could hand over home production to Scott Furlong and build an improved VTOL at Ryans. If NATO buy the French version, Sir Gordon sees more profit in a civil design which Corbett has shown him.

As the speculation continues, Eric Price has fun with the exterior shooting. Wilder stands in his jeep waving off the convoy of limousines as someone remarks that Wilder looks like “a warlord reviewing an armoured division,” and Ride of the Valkyries plays over the soundtrack. 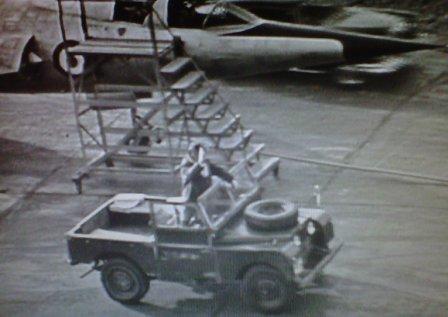 The second part kicks off with an amusing but intense afternoon tea on the terrace of the House of Commons as Labour party whip Tony Tilling (Anthony Newlands) discusses Wilder’s plans with Cameron-Grant and Sir Gerald Merle. Tilling’s concern is that nothing should embarrass the party while Merle and Grant are both seeking the post of aviation minister. As a prospective director of both Scott Furlong and Ryan Airframes, Grant convinces Tilling that he is best placed to investigate Wilder. The verbal fencing between Grant and Merle is amusing but complex. How sad that Bower’s script was seen only once – never repeated, never available for home consumption until fifty years later. 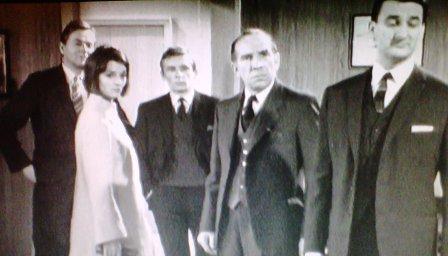 Wilder tells Corbett that the Germans like his VTOL, but would like it modified for toss-bombing (where the plane pulls up when releasing the bomb, distancing itself from the blast). Wilder asks how long it would take to provide a modified VTOL. “Don’t say six months, David. Say two months from now!”

Corbett protests that the German’s are not supposed to buy without co-ordinating with the other NATO countries. Still smarting from his experiences in “A Question of Supply”, even Corbett is aware that arming Germany is a political risk. When Wilder protests that the war ended 20 years ago, Corbett retorts that, “The Spanish Civil war was over 25 years ago, but that didn’t stop it blowing up again in Britain when we tried to sell Franco some of our frigates!”

Corbett is referring to a then-current but now long forgotten episode in British history which you can read about here.

“The scandal of the Flying Frigates, eh?” says Wilder, “It would make a good headline for the Globe.” And sure enough, with a tip off from Sir Gerald Merle, the Globe’s presses are soon thundering with the headline, “Now Flying Frigates!”

As Cameron-Grant decides to accept the safe seat on Ryan Airframes board rather than the risk of Scott Furlong. “The only time public opinion counts or is known is at a General Election”. The rest of the time, politicians only care about what the press writes. Wilder paraphrases: if he sells to NATO including Germany he gets a par on the back. If he sells to Germany outside NATO he gets a bloody nose. Grant agrees that it’s blatant hypocrisy

But now, Wilder’s enemies mean to take advantage of it. In a bravura final scene, Corbett, Henderson and Cameron-Grant are waiting to see Wilder when Laura Challis and Merle arrive on behalf of Sir Gordon to demand Wilder’s resignation.

“And who has he in mind to take my place?” Wilder asks, “David there, who has always told the press he has no responsibility? Grant, who has chosen to join a man who by his own admission is not big enough to take responsibility? Or Sir Gerald, who despite his connection with Scott Furlong has already spoken in the House deploring my action – a most honourable and public spirited gesture!” 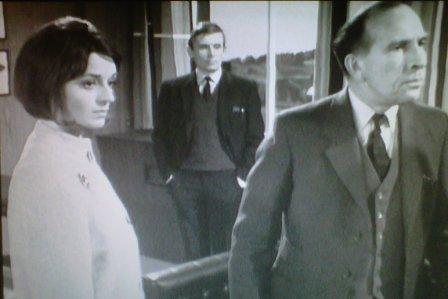 Wilder smiles and says that now they know where everyone stands, he can reveal that his last visitor represents Tonelier, the French Minister for Integration of Expenditure (from “The Golden Silence”). Tonelier has decided that if the Germans are going to buy Scott Furlong’sVTOL, further development of the French VTOL would be uneconomic. The Evray VTOL will be scrapped.

One of the most satisfying episodes of “The Plane Makers” third series, Bowers’ script brings together threads from previous episodes and delivers substantial action for most of the major characters. It’s particularly rewarding to see Don Henderson react to the temptation of the managing director’s chair, and his delighted grin when Wilder tells him to get over to Italy and start selling VTOL’s.

Patrick Wymark’s final demolition of his adversaries is devastating. In some ways it anticipates Bob Hoskin’s scene in “The Long Good Friday” where he tells American gangster Eddie Constantine that he’s going in with the Germans. 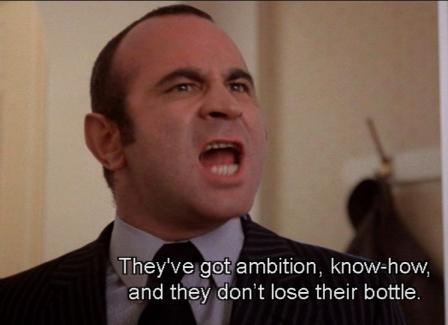 Bowers also uses secretaries to reflect the three main characters. Chip Coveney plays Henderson’s secretary Trilby, a knowing young woman who laughs at his flustered reaction to Wilder’s unannounced return and says of Laura Challis that, “Sir Gordon uses her like a spoon to stir up trouble.” The episode opens with Elizabeth Wallace as Harriett Evans growing increasingly annoyed as Corbett makes several false starts dictating a letter. And later on Norma Ronald plays Kay Lingard with cat-like amusement as she watches Wilder keeping Corbett waiting while he signs a series of letters.