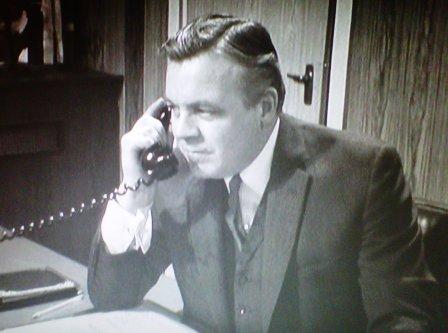 “You have a distracted quality. Like a boy that’s been caught stealing sweets.” Laura Challis to John Wilder.

When James Cameron-Grant hears a fellow MP say, “We may yet cancel the VTOL”, he takes it as idle chatter. But Wilder is determined to get to the truth. At a demonstration laid on for the Australian Air Force, Wilder is concerned by the grim expression on the face of the MOD Permanant Secretary, Sir David Carstairs(Anthony Nichols) , who has come to watch Henry Forbes put the VTOL through its paces. Grant concludes there is a pattern showing that someone at the top wants to cancel the VTOL. Laura Challis' analysis of the Minister’s speeches, especially in America, shows that he is against a British VTOL jet. Sir Gordon Revidge agrees; “The Government has cold feet. There’s a chill of compensation in the air.” .

“The Salesmen” is a mystery story. Whether or not it’s about the murder of the VTOL project is the heart of the mystery. James Cameron-Grant is employed as Wilder’s leg man to find out the truth. “We must be realistic about the aircraft problem,” says colleague Finlay Croydon (Tony Steedman) just returned from Washington, “Divide up the work.”

The episode is notable in showing a particular vulnerability in Peter Jeffrey’s performance. Later on, Jeffrey would often play austere authority figures, but in "The Plane Makers" we often see a more human side. In "The Salesmen" he is unsure of his relationship with Laura Challis, threatened by the Whip’s office, and conscious of intruding on his relationship with Sir David. He tells Grant it was a tremendous comfort to know that Grant was with his son in his final weeks. But when Grant says, “Korea was a long time ago,” Sir David agrees pointedly that it was.

Olaf Pooley contributes an interesting performance as the Chief Whip, Walter McDonald MP who is ironically introduced building a house of cards (this was many years before Michael Dobbs created the unstoppable whip Francis Urquhart in the novel and TV series of the same name). McDonald’s first approach is mischievous, followed by a laboured parable about a poor man whose bread landed butter side up. Finally, he resorts to direct threats. 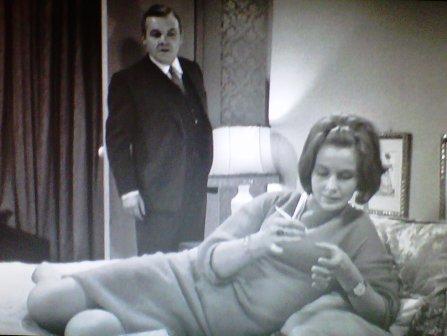 This episode also features one of the few appearances in this series of Pamela Wilder, played by Ann Firbank. Once again there is an acid little scene in the bedroom as they discuss previous visitors from the German airforce. “Do they ever bring their wives?” Pamela asks, “Or is that what they say about you on the Continent?”

Later, Pamela dances with an Australian officer who bears a disconcerting resemblance to Colonel Hall from The Phil Silvers Show. “This is what they call division of labour. John sits there drinking and talking while I do all the footslogging.”

In the third act, Wilder himself is seen to dance at a nightclub with Laura Challis, being complimented on being “rather nimble” while she warns him that she has made it a rule never to have an affair with someone in the same industry as herself. 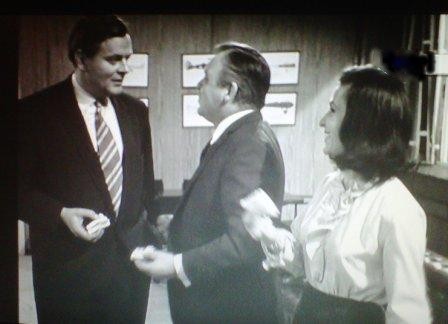 The climax of the episode comes in a bizarre little scene which opens with Wilder brooding in his office after receiving Grant’s warning not to sell to the Australians. He complains to Miss Lingard about the unpalatable sandwiches he’s been served . Norma Ronald comes forward to try one of the sandwiches as Wilder takes a phone call from Sir Gordon Revidge. The banker gives Wilder a free hand provided he realises that he’s on his own. Delighted, Wilder bites into a sandwich and he tells Kay Lingard to call his Sales Manager, Don Henderson. As she picks up the phone, Henderson (Jack Watling) strides into the room. “That’s the sort of efficiency I like to see at Scott Furlong. You deserve a raise.” He offers Henderson a sandwich and says to Lingard, “You deserve one, but you’re not going to get it.” Norma Ronald laughs and debates whether to eat a sandwich as Wilder tells Henderson they’ve got the go ahead to sell to the Australians. 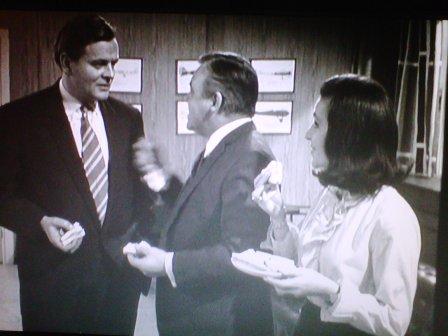 The episode ends on a cynical note as Revidge fakes outrage at Wilder’s actions and tells Cameron-Grant they will have to “rebuild bridges” with the Government. With Christmas and the pantomime season approaching, Peter Jeffrey fixes Norman Tyrrell with a disbelieving raised eyebrow. Ironically, in the real world, the new Labour Government really was getting cold feet over VTOL projects but no-one at ATV could have known this. Or could they?