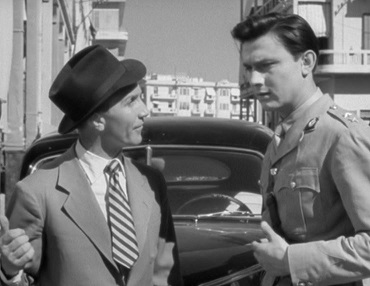 Inspired by made-on-location thrillers like T Men (1947) and Naked City (1948), producer Aubrey Baring of Mayflower pictures insisted on director David MacDonald's crew spending seven weeks filming establishing shots in Cairo's streets, docks and markets. The screenplay by Robert Westerby (Cone of Silence (1960) and The Scarecrow of Romney Marsh (1963)) was written with the co-operation of the Egyptian government, which gave access to the case files of its Anti-Narcotics Bureau. Made at a time when there were estimated to be only 50 (mostly wealthy) heroin addicts in Britain, the film painted a picture of a country already blighted by the illegal drugs trade. 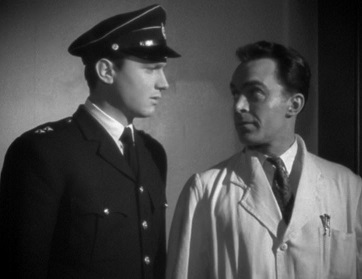 Cairo Road opens with Lt Mourad being called to a murder scene in Cairo's old market, after drugs are found in the victim's pockets. 22-year-old Laurence Harvey showed an improvement over his stiff movie debut as the villain in House of Darkness (1949). According to Cairo Road's publicity, "Larry has been carefully groomed by Associated British to whom he is under contract (and) shows he has a big future." Mourad theorises that the victim was stabbed by someone expecting to find a large shipment of drugs, but the shipment was delayed. Colonel Youssef Bey (Eric Portman) is unimpressed by the "rather bumptious" Mourad until his investigation links the victim Bashiri to the Pavlis brothers. Colonel Bey (Eric Portman) had jailed drugs distributor Eduardo Pavlis (Czech actor Karl Stepanek), but smuggler Rico remains at large importing heroin slabs "trademarked" with a portrait of Youssef Bey. Eduardo Pavlis, nearing the end of his three year sentence at Tura Farm Prison, idolises his brother. He reacts to a remark by Youssef Bey about Rico Pavlis skulking around importing drugs, shouting: "When you are all so stupid there is no need for him to skulk. He comes, he goes. You couldn't know him. You've never seen him! "

Spoiler: The Following Paragraph Reveals an Important Plot Development which could impair your enjoyment of the film.

Publicity for Cairo Road advised that "Harold Lang, another screen newcomer, proves himself a chiller-specialist in the role of Cairo's No 1 dope smuggler." When we first see Lang, he is on board a passenger ship in the guise of a British engine salesman called Humble. He is trying to make conversation with Anna Michelis (Egyptian star Camelia) who the audience knows is a courier carrying heroin into Egypt. With a delivery slightly reminiscent of entertainer Des O'Connor, Humble cheerfully tells her that "I've been snubbed by three men and frozen out by you."

Humble has seen her in conversation with Lombardi (Gregoire 'Coco' Aslan) and quizzes her relationship with him. Anna says Lombardi was just trying to pick her up and returns to her cabin, telling Humble he's boring her. Sauntering near the radio cabin Humble overhears a Morse Code message indicating that the police want the crew to detain Anna. When he quizzes the ship's officer (Peter Jones) he's told to stay out of it and keep his mouth shut. But Humble spots Lombardi on deck and questions whether he also understands Morse code. Later that night, Anna is subjected to a murderous attack. 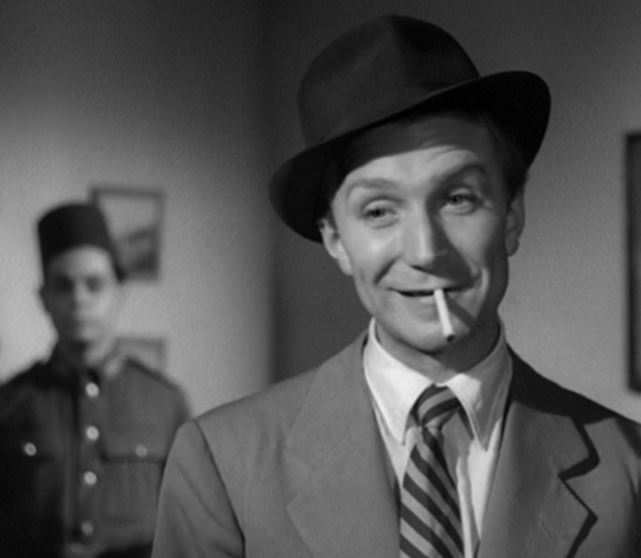 It's only revealed halfway through the movie that Humble is actually Rico Pavlis. By then he's convinced both us and the police of his identity (the screenplay continues to refer to him as Humble). Both Harvey and Portman are rather austere characters and Humble has been more of an audience identification character up to this point. Lang adopts a cold-eyed, abrupt delivery as Rico, although retaining his British accent. His movements are economic, even when furiously advancing on an informer to garrotte him. In a later scene, Lang is striding through a Suez street trying to evade a police dragnet when Laurence Harvey calls out to him. Lang, as Pavlis, puts a hand to the gun beneath his jacket, approaching the Lieutenant with a cold, calculating manner . Then, as Harvey continues to chatter, Lang withdraws his hand and his expression softens into the matey features of Humble as he conjures up a story to take advantage of the young policeman.

As in other police procedurals, the young officer is used to introduce the audience to the methods of the single-minded Youssef Bey who trusts no-one. Bey leads his men to disrupt the three routes used by the Pavlis gang to bring their drugs into Egypt. It's a strange mix of ancient and modern, with camels being led through a scanner at the border post to detect swallowed drugs, and Bedouin tribesmen being chased down by the "Camel Corps" as they try to make an escape.

Although the film was made with the support of the Egyptian Government, which gave permission to film in Tura Farm Prison and Abassia Mental Hospital, the film had censorship problems within the UK. The subject matter made it difficult to achieve the more profitable general admission A certificate (the new X category had just been introduced to exclude children under 16).

In the early stages of the film Mourad doubts the seriousness of the drug threat. Youssef Bey takes him to see Farghani (Thomas Gallagher), who was arrested with Eduardo Pavlis but later moved to the Mental Hospital. John Bailey (later Edward Waterfield, in the Doctor Who story Evil of the Daleks) plays the unnamed doctor at the asylum. The original script directions say that, "the compounds hold many men who are people no longer. Some sit motionless in the dust, some sing gently to themselves. Other beg for cigarettes, tonelessly like men talking in their sleep." In the film, we only see Bailey leading Harvey to the door of a barred ward. "These patients are here because they were destroyed by opium. They're alive. But dead. Some of them were poor and stupid. Some of them were good men. But the drug is a great leveller. Now they're all the same. All nothing." The doctor lets him into a barred ward and shuts the door behind him saying. "Look".It's reminiscent of the scene in The Third Man where Holly Martins is forced to view the children maimed by Harry Lime's black market penicillin. Mourani is similarly shocked by what he sees. 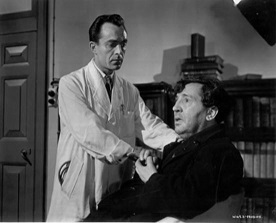 John Bailey as the doctor calms heroin addict Farghani (Thomas Gallagher)whose face could not be shown in the movie for censorship reasons.

Colonel Youssef Bey insists on seeing Farghani, a former doctor who aided the Pavlis gang. The mental home doctor says Farghani was "..was a doctor. A good doctor. A friend of mine. He worked too hard and started living on his nerves. At the hospital he had access to drugs. And he stole them. That was at the top of the slide." putting him under the control of the Pavlis gang. The doctor says Farghani has mentally retreated, "He tells himself he is somewhere else." Unimpressed, Portman insists on interrogating Farghani (Thomas Gallagher). The script notes that, "The man stares dully in front of him. His hands are restless all the time. , but otherwise he is very still. (and) to satisfy Censors requirements, Farghani's face is never seen."

It appears that the censors wished to emphasise the moral risk of drugs, but thought showing the effects of addiction would be too much for viewers under 16.

Last minute revisions, also seem to have caused the ending to be reshot. The shooting script resolves the early conflict between the two stars. Mourad makes his final report to Youssef Bey and is about to go home with his wife (French actress Maria Mauban). As they leave the phone rings with news of another incident. Bey says he will attend, and Mourad standing in the doorway, exchanges a look of agreement with his wife before saying he will come along. "It never ends, does it?"

In the movie, a stand-in dressed as Mourad stands in front of Beys desk. Portman sums up the case and then tells Mourad to go home to his wife. As the stand-in leaves, Portman answers the phone, agreeing to attend the latest incident and then uttering the closing words, "It never ends." Whether the censor objected to the scripted ending because it suggested a personal cost to law enforcers relationships, or perhaps not all the actors were available, it follows close on the curiously truncated climax to leave viewers with the feeling that something is missing.

However, last-minute rewrites can't be blamed for a final mystery. It ranks with the riddle of "Who Shot the Chauffer" in The Big Sleep. The final showdown is a tense affair but it rests on both Pavlis brothers being unaware that their agent Bashiri is dead. The newly released Eduardo is effusive, clearly idolising his brother, while Rico is more edgy, trying to downplay the mayhem he's caused. But both think the arrival of Bashiri will allow them to recover their losses.

Rico has earlier confirmed (to Anna's controller and the audience) that "Anna was just a name to me" and that he killed her to protect himself. But Rico also tells her controller that Bashiri is someone he can trust. So who killed Bashiri? Was it another gang, trying to move in on the Pavlis brothers trade? Was there a sub-plot that fell by the wayside? We may never know.

Cairo Road is a competent thriller; perhaps lacking the extra visual, plot or character elements that would have made it a classic, but still telling a compelling story.