In October 1969, Patrick Wymark was due to help out producer Charles Vance by appearing at the Devonshire Theatre, Eastbourne as Elwood P Dowd in a production of Harvey. Just before the opening night, he collapsed with a severe nosebleed (Charles Vance took the lead with a copy of the script in hand). The painful nosebleeds continued and two weeks later, he had a four hour operation. His wife Olwen Wymark said, "The surgeon told me at that time that these alarming nose-bleeds happened to many people without warning. usually they were people with high blood pressure. However, Patrick's blood pressure was normal."

As noted, Patrick Wymark was a hard working actor whose career depended on being perceived as healthy by employers and a week after his operation, this photo by Peter Ekin-Wood appeared in the Sunday Mirror for November 16th 1969 to confirm that all was well.

Tonic for Wymark after his big 'op' 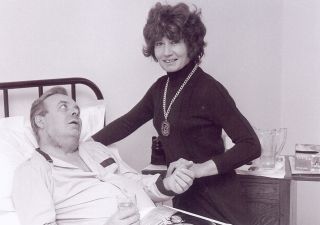 "Actor Patrick Wymark doesn't look too well (the report says) despite the bedside ministrations of his attractive wife, Olwen and a glass of tonic.

"But in fact he's 'doing nicely' at the Eastbourne nursing home where he's convalescing...His illness is likely to hold up shooting of a Ł1,000,000 Swedish-Russian film in which he has the main role."

As we know, Wymark was able to film The Man From The Other Side, as well as The Blood on Satan's Claw in April 1970. Almost a year after his operation, Patrick Wymark passed away on October 20th in Melbourne, while on tour in Anthony Shafer's new hit Sleuth .

The Australian press - giving Britain a foretaste of what was to come - indulged in a certain amount of speculative innuendo. Journalist Jim Keeps said he had interviewed Wymark on the day of his death and he "seemed obsessed by death, talking about the number of times he had been killed in plays and films." (n.b. as many as six). The Sydney Daily Mirror published an article by Matt White which speculated that Wymark had been suffering from throat cancer. Olwen Wymark was forced to issue a statement on 9th November stating that, "Patrick never suffered from throat cancer...If anyone wishes to check with the doctor who performed the post-mortem in Melbourne [Dr J McNamara, senior government pathologist] I think I can say with certainty that Patrick never suffered from throat cancer. He died of a heart attack...Because of the story, Interpol came to my house on the night of Patrick's death to make inquiries about his medical history."

Patrick Wymark was buried at Highgate Cemetary on 3rd November 1970 after a Requiem Mass at St Dominic's, Highgate. Two days later, on 5th November, a memorial service was held at Brompton Oratory. 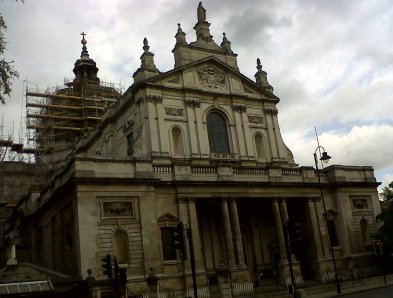 Derek Wickens, a friend of Patrick Wymark's, who was also an oboeist with the Royal Opera House, Covent Garden, played three short pieces by Benajmin Britten which were favourites of the actor. Broadcaster Wilfrid Thomas said that, "Many people thought he must be like the tough self-centred John Wilder, but he was completely the opposite. Although he admitted that he must have some of the qualities of Wilder, as actors must draw on their own reserves."