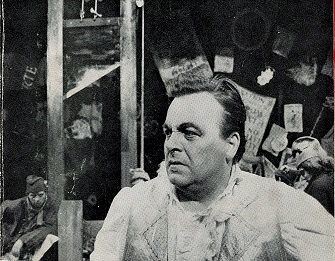 " This is a dictatorship. You want bread and they throw you our heads. You thirst and they make you lick our blood from the steps of the guillotine." Danton (Patrick Wymark) observed by his executioner (Patrick McGoohan)

Georg Buechner's play Danton's Death was published as a book in 1835, shortly after Buechner fled to France to avoid arrest as a revolutionary by the German police. Buechner died of typhus in 1837, and Danton's Death was finally performed as a stage play 65 years later. On 27 January 1959, James Maxwell's adaptation was performed at the Lyric Theatre, Hammersmith by the 59 Theatre Company, directed by Casper Wrede.

George Jacques Danton was a leader of the French revolution who became minister of justice after the fall of the monarchy. Danton helped establish the Committee of Public Safety which spearheaded the wave of mass executions known as the Terror. Danton and his associates, who desired a change of direction for the Revolution were later accused of corruption and sentenced to the guillotine. Danton's character is a matter of controversy, but Buechner portrays him as a principled man, distracted by pleasure-seeking and destroyed by the revolution.

James Maxwell, who would later play Colin Townley, secretary of the National Export Board in The Power Game made several changes in his adaptation of the play. He explained that, "The succession of short scenes absolutely requires uninterrupted continuity of presentation without pauses to change scenery and furniture, while at the same time the individual scenes as written have such literal requirements of furniture and scenery that it is impossible to do without them. " Maxwell therefore combined material from different scenes to make one long scene. He also changed the order of the first two scenes so as to open with the mob rule in the streets, rather than a card game within Danton's house. Finally, Maxwell invented dialogue to explain events in Revolutionary France that could no longer be assumed to be known by a general audience.

The play opens with the commoners of Paris hunting an enemy, any enemy. They have killed the aristocrats but with famine spreading they are even worse off than before, and now the seek to punish the new aristocrats who have profited from the revolution. "Death to the man with no hole in his coat! Kill the man who can read and write! " Robespierre (Harold Lang) praises the mob but urges them not to fight among themselves and instead rely on the Committee of Public Safety to execute their true enemies.

As Lacroix (Fulton Mackay) explains, "The Committee is in trouble. They must stage a glamorous show on the guillotine. The popularity of the guillotine must not drop, or the Committee itself will go to a very cold exit on the boards. "

Robespierre is drawn as a fanatic sustained by false logic. "If you leave a revolution unfinished, you dig your own grave. The weapon of the Republic is terror, the strength of the Republic is virtue! Virtue because without it terror is a disease. Terror because without it virtue is paralysed. Terror is the child of virtue. It is nothing else but justice, sudden, strong and most implacable. "

Robespierre and St Just (Patrick McGoohan) agree to denounce Danton and his associates on charges of accepting bribes from foreigners to undermine the revolution. Despite the jury being rigged, Danton speaks with such eloquence and force at the opening of his trial, that he begins to win the jury over and the trial is adjourned. Lacroix observes that Danton has found his passion too late; "If you had bothered about your life a little earlier, we would be in a different place now! " 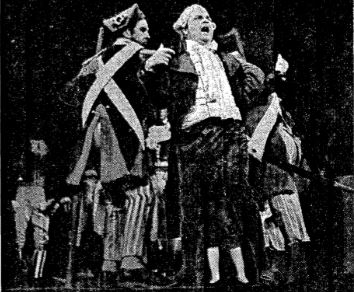 St Just decides that the trial, "must proceed without further testimony. Any aspersion of evidence by the accused shall be declared in contempt of the tribunal. " Despite this, Danton inflames the crowd, accusing Robespierre and St Just of high treason. St Just halts the tribunal and Danton and his friends are condemned. 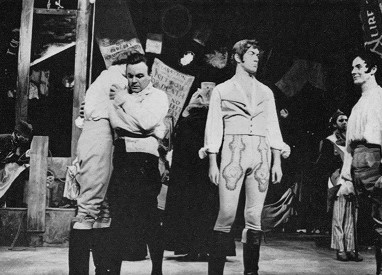 Reviewing the play, The Times wrote that "Danton is a sort of Hamlet inwardly disturbed by the part he's played in the revolution and now affecting not to take life seriously," The anonymous reviewer continued that, "Patrick Wymark gives us both the fine eloquent public side of the hero and the misgivings which spring so eloquently from the other side of his nature. He is in public and in private something of a poseur, but Mr Wymark well establishes the vein of honesty that runs through both the demagogue and the introspect."

The Times reviewer also had praise for James Maxwell's judgement as Camille, particularly when overcome by fear. Although he felt Harold Lang, "attempts a subtlety of characterization (as Robespierre) which he only just fails to make good ", but felt Patrick McGoohan, "taking an easier line with the evil (St Just) was completely effective".

Curiously, the reviewer makes no mention of Dilys Hamlett as Julie, Danton's wife, or Avril Elgar as Lucille, wife of Camille. While the men are allowed a heroic exit in their quick walk to the guillotine, it is the reactions of Lucille and Julie which drive home the human cost of the conflict. The traumatised Lucille's closing words drive home the message that the terror will continue and the story does not end.

On 19 May 1959, BBC 1 transmitted Danton's Death as part of its World Theatre strand. . Directed by Michael Elliot (associate artistic director for the 59 Theatre Company) the play carried over the cast of the stage production, with the exception of Patrick McGoohan (Colin Jeavons taking on the role of St Just). James Maxwell thought it significant that, "on television, where it is possible to edit separately shot scenes into unbroken continuity, the play was very successful indeed, more so than on stage. "

It seems that Buechner was ahead of his time, not only in writing a play of cinematic scope, decades before it could be fully realised,but also in identifying issues which continue to haunt us today.