How Do You Vote?. Writer David Weir. Director John Cooper.

“Wilder’s no fool. Popularly he’s the wonder boy of British aviation. He wants to gamble on the difference between solid commercial success and a spectacular winner.” Sir Gordon Revidge. 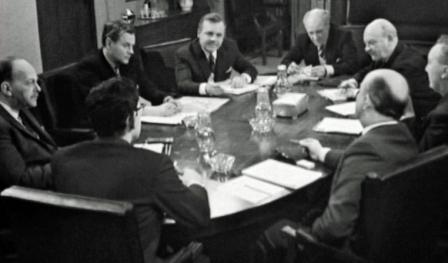 Bancroft, Henderson, Wilder, Revidge, Cunliffe, Keble, Cooke and Katz (back to us).

With fifteen of the first thirty Sovereigns unsold, Wilder wants to borrow money from Elbertson's merchant bank to build another twelve. Scott Furlong need to sell forty two Sovereigns to break-even, but the cost of building forty two at the start would have been too great a risk. Thirty Sovereigns was a compromise between the limit of their capital and credit and the break-even figure. Even at this point, the cost of additional debt would be crippling unless Scott Furlong can sell all the planes. Wilder says the extra twelve planes will put them ahead of their French competitor . “There can only be one winner in a race like this.”

This is an audacious episode from “Series Story Consultant” David Weir. The board room scenes bring rival directors Keble (Martin Wyldeck) and Cunliffe (Tom Macaulay) and the clueless Lieutenant Commander Cooke (Dennis Ramsden) back from Wilder’s first episode “Too Much To Lose” , while also introducing new Chairman, Sir Gordon Revidge (Norman Tyrrell). Press Relations Officer Simon Stride is referenced, while Douglas Muir returns from that same episode, “A Question of Sources” as Technical Director Tom Bancroft . There is a real sense that “The Plane Makers” is becoming an integrated series rather than a collection of one-off plays, although since the series was never repeated it’s questionable how many viewers would have picked up on this.

Unfortunately, Wilder’s plans are threatened after an altercation at the office party with computer programmer Philip Hammond (Eric Thompson). Wilder sacks Hammond, but the programmer’s section head is Doctor Katz (Alan Tilvern) a board member previously in favour of Wilder’s plan. Telling Wilder that, “I hire and dismiss my own people” the scientist insists on bringing Hammond’s case up at the Board meeting. As tempers flare, the disagreement escalates into a vote of confidence in Wilder’s leadership.

Wilder is anxious to conclude the Board meeting before 2.30 as he plans to drive over to his son’s new boarding school. It’s two months since he’s seen Nigel (first mentioned in “Strings In Whitehall”) and while Pamela thinks he’s too young to live away from home, “He needs a crammer if he’s going to stand a chance with his common entrance.” Wymark quietly illuminates what seems like a chink in Wilder’s armour as he confides to Henderson with a blend of pride and embarrassment that Nigel has already won a prize during his first term. But when Henderson enthusiastically asks what for, Wilder admits the prize is for painting. Half-humorous, half-serious, Wilder reassures Henderson “He’ll get over it (painting)….He’d better!”

Sir Gordon Revidge (Norman Tyrrell), the new chair of Scott Furlong is introduced in a meeting with Lord Teddington (Anthony Sharpe) of Elbertson’s Merchant Bank. “Teddy” had appeared briefly (played by Dennis Cowles) alongside Elbertson in the first episode “Too Much To Lose”. Following the death of Elbertson in “The Thing About Auntie”, we learn that neither Wilder or Sir Gerald Merle MP succeeded him to the Chair of Scott Furlong. Instead, Revidge (who already represents the bank on other boards) has been put place as "Wilder's safety valve."

Weir reminds us through genial dialogue between the two bankers that there are three companies in the Scott Furlong group and the balance of power is very delicate (Elbertson had described himself as a parson in a shotgun marriage). Revidge represents the bank’s interests on the boards of several companies and acknowledges that Wilder is “ a very valuable man”. Having got advance warning of Wilder’s plan, Revidge warns Lord Teddington that if the Scott Furlong board agree to ask for the money, refusal by Elbertson’s would cause bad feeling and be used as an excuse for any lack of success with the Sovereign. Playing Revidge, Norman Tyrrell was 48 at the time of “The Plane Makers”. He had made his stage debut aged 18 in a production of “Murder In The Cathedral”, and in the 1950’s he appeared in several Bristol Old Vic productions before starring as Sid Kittle in the 1956 BBC series The Recording Angells written by R.F.Delderfield. In the 1970’s, Norman Tyrrell appeared in a number of film and TV productions such as Jim Allen’s Days of Hope . He also performed with the Royal Shakespeare Company, playing Balthasar in the 1978 production of The Comedy of Errors, and Bardolph in the 1979 production of The Merry Wives of Windsor (with John Woodvine as Falstaff). One of his last TV roles was as Harbin in the 1997 “House Calls“ episode of “A Touch of Frost”. 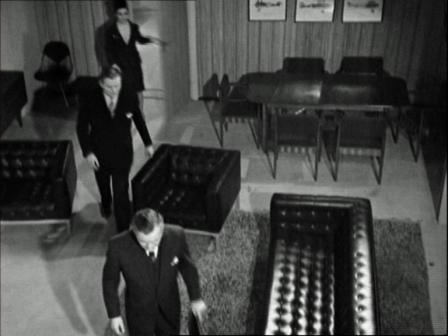 Tyrrell makes a quiet but firm contribution to the board room scenes. At one point Wilder shouts that, “I run this company” and Revidge smoothly corrects him; “WE run this company – the directors.”

Weir astutely explores several issues in the board room scenes which fuel the explosive confrontations. For Dr Katz there is a humanitarian issue of whether Hammond should lose his job because of an off-duty argument with his managing director. Married to this is his own pride as to hiring and firing his section staff and the possible impact on his own productivity of losing a key employee. For Wilder the issue is one of respect – in this he is supported by fellow director Keble who says, “The authority of the Managing Director is very important. I don’t think Wilder is morally right, but I support him.” Ironically, although Revidge uses his casting vote to support Hammond’s dismissal, Wilder has been swayed by the opposing view. Once he has won the vote of confidence, Wilder proposes to apologise to Hammond and reinstate him. At this point Weir sharply underlines Revidge’s formality. As Chairman he enforces the Board’s decision and refuses to let Wilder go back on his decision to sack Hammond. 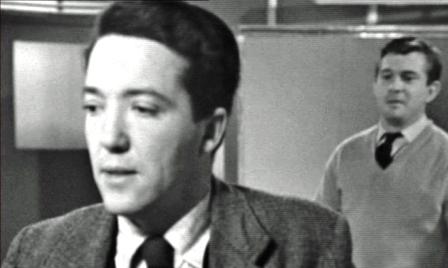 The luckless Philip Hammond is played by Eric Thompson. Thompson wrote and narrated the BBC adaptation of the French animation series “Le Menage Enchante” and “The Magic Roundabout “ ensured that his voice and characterisations would become part of the consciousness of a generation. Thompson was also the father of Sophie Thompson, ( Gosford Park , Harry Potter & The Deathly Hallows who starred as Miss Adelaide in the 2015 production of Guys and Dolls and her sister Emma ( Saving Mr Banks . Unfortunately, while the understandably depressed Hammond’s livelihood is central to the plot, he is only seen in part one and is the subject of discussion in the second and third parts. 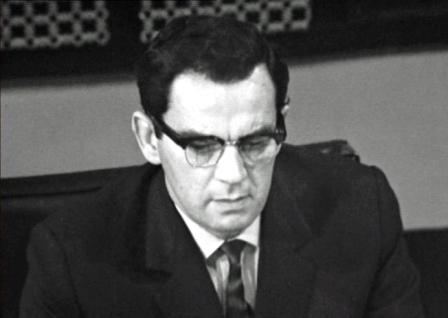 The role of Doctor Katz provides a rare opportunity to see Alan Tilvern playing something more sustained than the heavies he was usually cast as. Katz is a technical specialist who is well aware that he has made millions for the company and is unafraid to speak his mind. During the boardroom scenes, director John Cooper shoots Katz in isolation, from above, whilst Wilder is seen from a variety of angles in conjunction with other directors. The effect lends Katz a magisterial air, deliberately pressing home his points while Wilder struggles to brush the issue under the carpet.

Weir and director John Cooper also deliver a compelling scene between Martin Wyldeck as the poker-faced Keble and Patrick Wymark, when Wilder tries to win his support for the extra planes before the board meeting. Sitting on opposite sides of the aisle in an empty plane, Keble accuses Wilder of, “Only telling me now because you’ve heard I’m opposed to the idea. Otherwise you’d have done your usual trick of pushing ahead and asking afterwards.” Wilder concedes this is true, but tells Keble, “I ran this firm long before it was part of a group – and very successfully. The Sovereign is a result of what you call my pushing. Somebody has to make decisions. A lot of people’s livelihoods depend on it. And I’m very good at it!

The original success of “The Plane Makers” rested on the marriage of good dialogue and strong performances. As we often note, there were no repeat screenings, no catch up, no DVD’s. The success was built on one airing. Patrick Wymark portrays a range of emotions – petulance, rage, frustration and charm – throughout this episode, but it succeeds on the interaction of the cast. When the board moves on to discuss Wilder’s proposal to ask for more funding, the arguments make sense; Wilder explains that twelve Sovereigns have been sold with another six on option. Four of the options mature at the end of the month and the other two mature at the end of nine weeks.

Don Henderson summarises that at the end of nine weeks they will have firm orders for the first 21 out of 30 aircraft. With his salesmen following up enquiries they could sell another 68 aircraft! At this point Revidge cautions them not to get “carried away by our own PR”. The money from the first sales has still not been received. Cunliffe (Tom Macaulay) says it’s likely only 10% of the orders will turn into sales. Wilder counters that 10% is very pessimistic but says that seven more sales would mean 28 aircraft had sold leaving two of the original 30 on the shelf. “If we need 42, why not build them and give ourselves unbeatable lead time of delivery over our competitors?”

Weir and Cooper give us a taste of the ebb and flow of argument around the table without going into so much detail that it becomes tedious. We are reminded that this is not so much an argument about building the planes as an argument about asking Elbertsons to lend more money. Sensing a tactical mistake by Revidge, Wilder glances at his watch and pauses to phone his son’s school and pass on the message that he won’t be taking him out for tea.

Wilder’s son Nigel is never mentioned in subsequent series of “The Plane Makers” and “The Power Game”. It’s possible that the impact of Wilder’s lifestyle was thought to be too cruel for a child and the character appears to have been airbrushed out of continuity, with the battling Wilders subsequently portrayed as if childless.