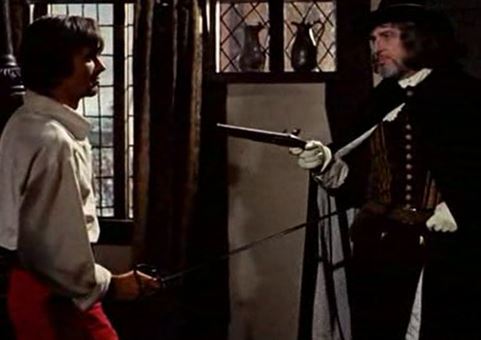 Witchfinder General was sold as a horror film. Produced by Tigon Films (Tony Tenser's 1960's rival to Hammer Films) and released in America as The Conqueror Worm by co-financiers American International Pictures, it starred Vincent Price. Audiences might have expected something in the vein of Roger Corman's Edgar Allen Poe gothics. Instead they got Michael Reeves' 'English Western' - steeped in the real-life brutality of the Civil War, pitting Roundhead cavalryman Ian Ogilvy against self-appointed witchfinder Vincent Price. Patrick Wymark provides a strong cameo appearance as Oliver Cromwell.

Attacked by British critics for its - at the time - unacccustomed level of violence - it was initially a failure. But its reputation grew until by 1981, Danny Peary could include it in his first volume of Cult Movies. Peary said it was, "A stunning film in many ways ...Reeves' greatest achievement is that he was able to maintain an extraordinary momentum throughout." John Hamilton in his 2005 history of Tigon, Beasts in the Cellar, says that, " John Coquillon's stunning photography and Paul Ferris' rich score helped to counterpoint the deliberately crude and unrelenting violence.The film as a whole displayed a maturity and command of cinema only hinted at in Reeves' previous work."

Witchfinder Generalwas adapted from a historical novel by Ronald Bassett. The novel provided the core of the movie - it fictionalised the banal life of the real Matthew Hopkins who was never brought to justice and died in his bed of consumption. Bassett's novel provided a dramatic resolution by inventing the vengeful Roundhead played by Ogilvy in the movie. Writing in Vincent Price: the Art of Fear, Denis Meikle said that the novel was "thorough with its eye for period detail and convincing in its portrait of the social conditions which prevailed in England during the Civil War, " finding it, "Brisk, engagingly written."

Patrick Wymark appears briefly as Oliver Cromwell, promoting Ogilvy's character and charging him with hunting down the fugitive King. This would be Wymark's third portrayal of Cromwell and is the only one to survive.for more details go here

Wymark also delivers the opening narration, which sets the action in 1645 in the middle of "Bloody Civil War, with Royalist Party of King charles on the one side, and on the other, Cromwell's parliamentary party, the Roundheads." It sets up the sense of disorder in which men like Hopkins could profit. But the movie also makes it clear that the witch hunting is an outlet for deeper prejudices. Priest John Lowes (Rupert Davies) is targeted because he is a Catholic and his rituals are already seen by some of the villagers as heresy.

Lowes is the uncle of Sara (Hilary Dwyer) the fiance of Richard Marshall (Ian Ogilvy). A farmer, Marshall has elisted in the Parliamentary army although he makes it clear this is only until the "trouble" is over. It's illustrative of the power vacuum caused by the conflict that Marhsall actually directs Hopkins towards the village of Brandeston as he leaves to rejoin his regiment. "What could a lawyer want in Brandeston?" he muses, little realising the devastating effect Hopkins will have.

It is well known that Price was imposed on Reeves, who had wanted Donald Pleasence to play Hopkins. Denis Meikle advances the theory that Reeves' had conceived Ogilvy's character as the star, with Hopkins as a supporting character.This would explain why Reeves did not want a Hollywood star in the role of Hopkins. However, Meikle observes that, "the absence of bonhomie extracted from Price one of his most assured performances."