A Doll's House & The Nuns

In November 1969, the University of Sussex, near Brighton, opened its Gardner Arts Centre. The building, its plan formed of radiating concentric circles, was designed by Sir Basil Spence. Inside one of the spaces, was a 430 seat theatre with a stage designed by Sean Kenny, who had earlier designed the original Oliver and the 1961 production of The Devils (Today, after years of disuse, the Grade II* listed building has recently been refurbished as the Attenborough Centre for the Creative Arts).

Back in 1969, the Director of the Centre was Walter Eysselinck, who inaugurated the theatre with a series of celebrity productions which ensured reviews from the national press. The opening production was John McGrath’s adaptation of his friend David Caute’s novel about the Digger movement, Comrade Jacob (later the basis of the film Winstanley). The second and third productions were A Dolls House and The Nuns starring Patrick Wymark. 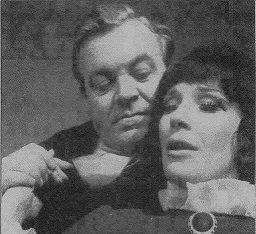 Translated by Michael Meyer from Ibsen's original and directed by Peter Coe (who had helmed the original run of Oliver!) the production starred Fenella Fielding as Nora, the unfulfilled wife of banker Torvald ( Wymark). Although Fielding is now best known from Carry On Screaming she had a healthy career in revue and the theatre and was a big draw for the production. Fenella had shared a stage with Wymark previously at the June 1963 Stratford Poetry Festival where they delivered a selection called Another Man's Poison . Coincidentally, both Wymark and Fielding had also appeared in the Danger Man episode An Affair of State , although their characters did not meet.

Denis Quilley ( Timeslip ) played the moneylender Krogstad, who triggers the crisis within Torvald’s household. The Stage said Quilley "won sympathy for Krogstad's sufferings through loss and injustice.". The same reviewer noted Edward Atienza's "admirable interpretation (of Dr Rank's) hidden depths and the "ice-cool, calculating" performance of Delena Kidd as Nora's childhood friend, Mrs Linde. The Daily Telegraph observed Fielding’s "arresting fluttery nervousness" while The Times noted that, "Patrick Wymark plays Torvald with complete directness, a gruff bruin of a man who finds most of his meaning in business rather than at home. It is not a subtle performance but it contrasts well with Fenella Fieldings febrile Nora. " .On a contrasting note, The Stage was not impressed with either of the leads, saying Wymark carried little conviction and Fenella Fielding made Nora's behaviour, more incomprehensible than ever."

However, theatre audiences were no doubt getting what they paid for. The situation of the play had enough echoes of John Wilder’s domestic situation to satisfy fans of The Power Game, even if it's arguable that Barbara Murray had ensured that Pamela Wilder was never as oppressed as Nora. 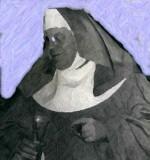 In March 1970, Patrick Wymark starred as a cigar-smoking Mother Superior in Eduardo Manet’s "The Nuns".

"I wasn't doing a kind of salacious drag act, " Wymark told journalist Neville Nisse in June 1970, "It was a good play, which offered what I thought was a challenge." Reflecting on his illness in October 1969 he continued, "The last thing I would dream of is to ridicule nuns. (They) do most useful work like those who nursed me so well after I had to have a minor operation in Eastbourne recently."

Far from being a "Carry On" type farce, Belgian director Walter Eysselinck’s production of "The Nuns" was a dark murder tale. The action is set in a cellar where Mother Superior (Wymark), Sister Angela (Dudley Foster) and mute Sister Inez promise to help a wealthy aristocrat escape from the mob destroying the town above their heads.

“The Nuns” was Robert Baldick's translation of "Les Nonnes" by Eduardo Manet. A former director of the National Theatre of Cuba, Manet left for Paris after Fidel Castro supported the Soviet invasion of Czechoslovakia in 1968.

"The Nuns" was based on a real-life incident where a group of rich Cubans were swindled by con men posing as priests and nuns offering to organise a boat to Miami in exchange for jewels and dollars. In reality, the victims of the con were left alive, but in Manet’s play, the aristocratic Senora is murdered, buried and then exhumed by the Nuns, “ to be displayed as painted and bejewelled proof of the trio’s innocence.” 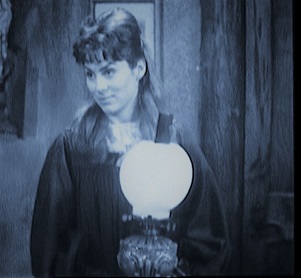 Manet relocated the action to Haiti during the 1804 genocide of white French colonists by the former slave population at the urging of governor general Jean-Jacques Dessalines. Historic reports of the massacre suggest women were killed last and some doctors and priests were spared, so the disguise of a Nun makes some sense. However, this is never discussed in the play – no comment is made on the fact that the Nuns are played by men. Similarly, although the Senora may seem naive to accept the Nuns' offer of help, historic reports suggest that some of the white colonists were smuggled out of Haiti by foreign mariners (Dessalines was anxious to preserve Haiti's exports). Sadly, current events show that people smugglers (and fake people smugglers) still have a ready supply of prospective customers ready to risk everything for the chance of life.

Manet was adamant that, “essentially it was Chinese theatre and Kabuki” and that original director Roger Blin told his cast, “You must be more macho than any macho. Don’t use little voices.” 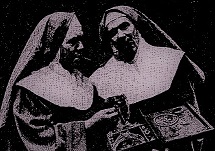 According to Irving Wardle the Times March 13 1970), Patrick Wymark played a "beefy" and "nicely sanctimonious" Mother Superior, while Dudley Foster played a “wild-eyed knife brandishing” Sister Angela. The play dealt with a question of identity. Are they crooks posing as nuns or nuns turning into crooks? Wardle was impressed by the “claustrophobically guilt-laden atmosphere in which anarchic role-playing signals the breakdown of external authority.”

According to Phyllis Zatlin, “The Nuns” reflects much of Manet’s work in the 1970’s where, “characters react to metatheatrical games (and) the unseen, outside world represents revolution or some other danger.”

In New York the play closed after one performance at the Cherry Lane Theatre. The role of Sister Angela did allegedly bring Roy Scheider to the attention of William Friedkin for The French Connection (Thayer David from “Dark Shadows” played Mother Superior). While the play lasted longer at Brighton (doubtless on the strength of Wymark’s name) it was not the success that it had been in Paris. It’s possible that the English translation lost something of this Cuban author writing in French. On the other hand, the play was translated and performed in Afrikaans so maybe “The Nuns” had more to say to South African audiences.