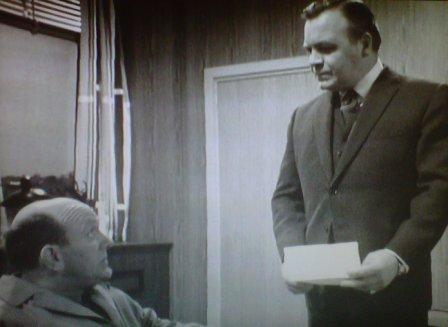 Spoiler: If you have “The Plane Makers” DVD, or are planning to buy it, you should watch this episode before reading about it, as it contains a spoiler so big it could only move on a low-loader with police escort.

“I saw my own security file at Gregson’s once…and they knew more about me than I did myself. They never asked me a single question. Every stupid thing I’d ever done was listed and I couldn’t argue because nobody ever asked me.” Don Henderson

Ministry of Defence investigator Greening arrives at Scott Furlong to review security. A classified file is missing from Arthur Sugden's office (his rival Bob Fraser has taken the file for work purposes). Sugden refuses to let Greening’s men search his home for the missing file. Even when the file is found, Greening is unsatisfied. The file, “is meaningless in itself – all documents are – it’s the effect they have on people (that’s important). The file was a keyhole and we shall look through it and see a whole room!”. 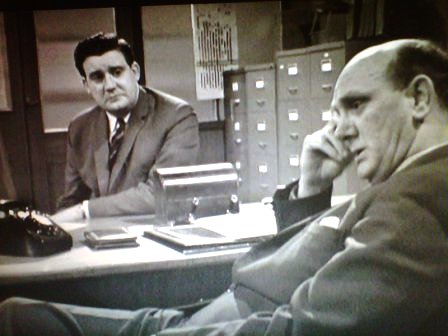 After investigating Sugden further, Greening decides to remove his provisional security clearance. Arthur’s professional association tell him he can't fight because the security people don’t have to give a reason for removing his clearance. The Scott-Furlong board sees Sugden's continued presence as a threat to the VTOL contract. Corbett says by telegram that Sugden's job is not important enough to jeapordise the VTOL project. Ironically, Wilder resists because he doesn’t want civil servants interfering in his business. But even Wilder can’t win this one. Sugden is given two options – work under Fraser as deputy works manager producing Sovereign parts, or resign on health grounds with three years pay and 70% salary. But he must also agree to keep silent about the real reason he left.

“There’s one thing I learnt from my father, “ Sugden says, “Principles don’t pay the rent.” He agrees to resign.

Don Henderson drives Sugden home and breaks the news to Mary. “He’s done nothing,” she says, “He’s not broken any law.”

“There isn’t any law,” Henderson says, his voice breaking, “They make their own.” 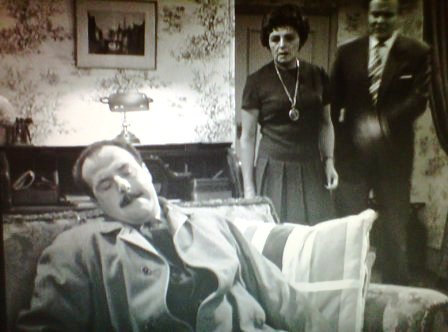 In Edmund Ward’s 1969 series “The Main Chance”, his lawyer hero David Main is advising a company which has just taken over a factory that employs an industrial agitator called Grady (Anthony Bate). Grady joined the firm just after takeover talks were announced and they suspect his target is the wider conglomerate. Main suggests his clients transfer Grady to a production line doing classified work for the Government, “And then get him thrown out as a security risk. It’s a branch of the law where there’s no legal comeback.”

In, “It’s A Free Country- Isn’t it?” that same law triggers Arthur Sugden’s downfall. Scott Furlong’s security officer Major Farrell (Cyril Raymond) reminds Wilder, “As part of all defence contracts, Ministry security have the right to check on all arrangements and personnel.” To smooth the way for the VTOL project, Trade Union officers with “affiliations” (to the Communist party) have already been moved with “no fuss.” Even so, Ministry investigator Greening (Meredith Edwards) says, “Industry always regards security as a quiet matter – above a certain level that is. A file left in a taxi by a director usually creates far less fuss than when a workman steals ten pounds of lead.”

Reginald Marsh’s final appearance in the series draws together several themes: Wilder’s original prejudice that Sugden did not have the right background for the job of General Works Manager is echoed by Greening who says, “The profile, as our American colleagues would call it, is not a very impressive one from a security standpoint.”. 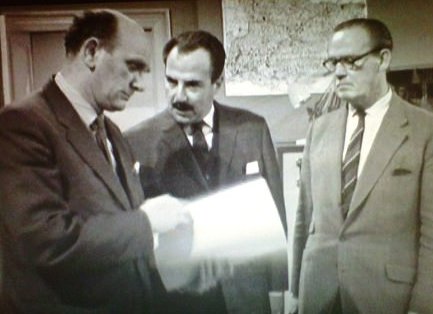 The self-belief (or arrogance) that led Sugden to challenge Gilbert Corey during the war (“How Can You Win If You Haven't Bought a Ticket?”) becomes part of the circumstantial case against Sugden (the fact that Corey tried to have him court martialled is pulled from Sugden’s RAF record - the fact that Sugden was vindicated is ignored). His attitude antagonises Greening, but also triggers events. Sugden refuses to let Bob Fraser “pick his brains” over armament weights for the VTOL. As he exits the office, Sugden tells Fraser, “You might pick up something from those books over there on the shelf. That’s how I learnt about it. Late at night mostly.” Fraser flicks unenthusiastically through one of the manuals before spotting the security cabinet where Sugden has a file on “Vibration Dampers for Armament Mounting”. Unknown to Sugden, Fraser has a key to the cabinet and borrows the file, resulting in it being missing when Farrell and Greening make their check of signed out documents.

Greening and Farrell begin to search Sugden’s office for the file but he makes them stop. Later, Sugden refuses to let Mackenzie (Bryan Mosely, the “big man” from “Get Carter”) search his house.

In the second series episode “No Man’s Land”, Wilder opposed Sugden’s appointment because he didn’t have the right background. Now Greening makes the same assessment. When Major Farrell excuses him saying, “A lot of people regard our job as interfering,” Greening qualifies; “Yes. Workers. Labourers. But General Works Managers – No. I should have expected full and automatic co-operation from a General Works Manager.”

Greening takes into account Sugden’s background and asknowledges, “The usual working class resentment of police action. A dogmatic resentment of encroachment of privacy.” But Sugden should have risen above this. “He is a man of some authority and as such he should understand some of the problems of authority. If he hasn’t got this understanding, then he’s not a fit person to have security files at his disposal.”

Meredith Edwards brings a lugubrious authority to the role of Greening, who introduces himself to Wilder by saying, “People don’t like security officers and this is a feeling I like to encourage. We’re not engaged on a convivial activity.”

There is a certain irony in his casting. When Edwards reviews the file compiled on Arthur Sugden, he is talking about a life with similarities to his own. The son of a coal miner, Edwards worked as a factory lab assistant before becoming an actor. As a conscientious objector on religious grounds in World War Two, he served in the National Fire Service in Liverpool before being drafted into the Non Combatant Service with the “Army Tropical Theatre” in Palestine. (“Is Sugden religious?” Greening asks Mackenzie . “No. Didn’t act like a pacifist either.”) After the war Edwards appeared in films such as “The Blue Lamp” and “The Long Arm”for Ealing. A strong-minded Welsh nationalist who later stood for Plaid Cymru in the 1966 general election, he persuaded director Leslie Norman to let him play his death scene in “Dunkirk” (1958) in Welsh.

The file on Arthur Sugden is consistent with what we’ve seen before. Sugden’s father was an activist in Ossett, not popular with the employers. His brother, played by Jerome Willis in “No Man’s Land”, is a fierce union man. Sugden had been a union convenor before becoming a manager. From his RAF record we learn that Sugden refused reserve duty for Korea, stating that he saw too many lives wasted during World War Two. Greening concludes that they have a “circumstantial but valid case” to withdraw Sugden’s security clearance.

Given that John Wilder opposed Sugden’s appointment as General Works Manager throughout the second series of “The Plane Makers”, Edmund Ward makes his defence of Sugden convincing. “I don’t even like the man.” He tells Greening. But he believes in him. As he tells the Scott Furlong Board, “I’ve had his Northern integrity shoved down my throat til I nearly gave him a hymn book.” Perhaps unconsciously he's echoing Gilbert Corey at the end of the last series when he said, "“ I don’t like Sugden. But by god I trust him.”

It's made more convincing when Sir Gordon Revidge announces that he's already cabled David Corbett, who thinks the matter is not important enough to threaten the VTOL project. The fact that Sugden is now perceived as "a Wilder man" makes it seem right that Wilder would take an opposite view to Corbett. When the Board wants to remove Sugden, Wilder challenges Sir Gerald Merle; “I thought you were supposed to be the unswerving champion of the individual.”

Shiftily, Merle replies, “On security matters I’ve always found it wisest to support the proper authorities,” and then retorts, “I’d have thought YOU were hardly a staunch advocate of democracy.”

“I’m not,” Wilder replies, “But I will not have a greasy little man threatening me in my office!”

Wilder’s pride highlights another common theme in this episode. Wilder prides himself on fighting to retain Sugden rather than standing with the “grey, little men”. Greening has pride in his instincts, on ensuring that the highest levels of management are treated equally with the labourers and on getting his boot on the throat of industry. It could also be argued that Sugden’s downfall is triggered by pride and the rivalry with Fraser. The episode opens with him leaving for work early, telling Mary that, “Whatever time I get in, Bob Fraser’s there an hour earlier. It gives him time to think up all the questions so he can pick everyone’s brains.” We later see Fraser complaining to Wilder that Sugden won’t share his knowledge about armaments weights (“He did a lot of this work during the war and I didn’t”). Wilder is unsympathetic, “All the details are down on paper. If you don’t understand them, that’s your look out.” Sugden could have helped Fraser, but instead –with a touch of pride – reminds him of all the study he put in. Fraser, perhaps not wanting to look stupid with Wilder’s words fresh in his ears, helps himself to the file in Sugden’s security cabinet. 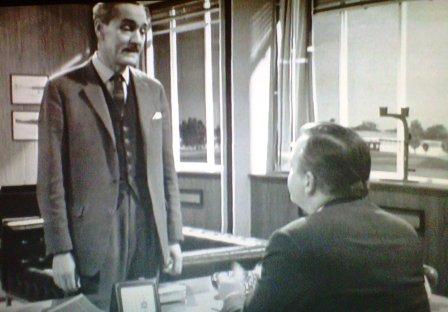 Fraser only has a key to the secure cabinet because it came from Ryan Airframes where Fraser was works manager. Fraser got the spare key because “Bill Ryan was fed up with the red tape applying for spares” (Ironically, Bill Ryan was played by John Wentworth, who would later appear in “The Main Chance”, including the episode “The Professional” mentioned earlier).

The second series episode “A Question of Sources” by Wilfred Greatorex also dealt with a conflict between a vital technician whose son is a communist, and an officious security officer. In this episode, Scott Furlong’s security officer Farrell (Cyril Raymond) is more personable, trying to make Wilder understand that he has to co-operate with Greening before he arrives. He’s also the one who has to make the full impact of Greening’s decision clear when he collects the security files from Arthur’s office. Sugden says he’ll need the files and Farrell says, “I think they’re taking you off VTOL work – I’m sorry.”

Even after repeated viewings, “It’s A Free Country – Isn’t It” still has impact. Reginald Marsh’s exhausted slump into his armchair at the end sums up all we’ve learned about Arthur Sugden – his passion for plane making – “we create” – his reputation within the industry – now all lost. Modern TV shows come up with ever inventive methods of “killing off “ characters, but no-one has yet destroyed a character as thoroughly as “The Plane Makers” did with Arthur Sugden..